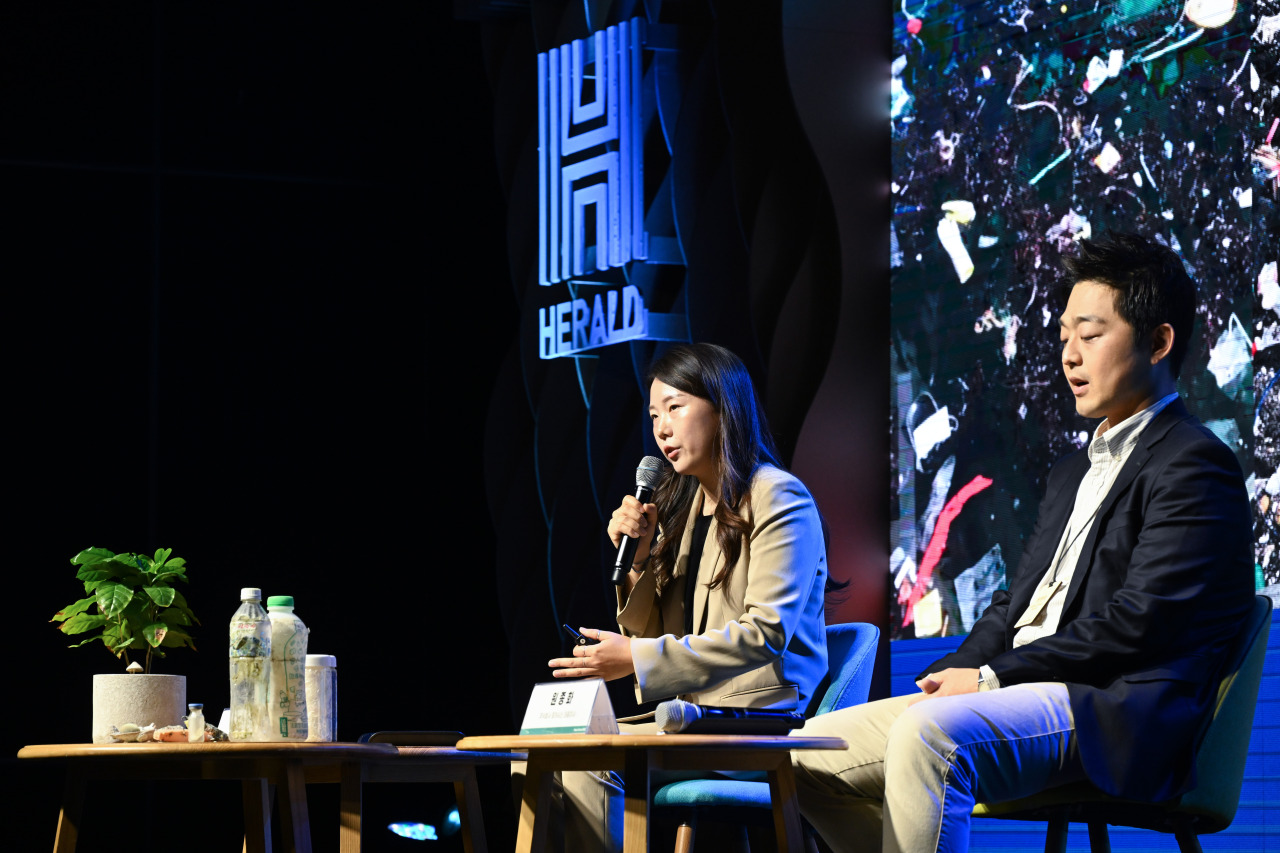 Byeon Su-bin (left), President of Diphda Jeju and Won Jong-hwa, CEO of Foresys speak during a session at the second H.Eco Forum held in Seoul, Thursday. (The Korea Herald)
The third session of this year‘s H.eco Forum focused on plastic pollution in the oceans, as well as the ongoing efforts in the private sector to address this issue.

The plastic waste in the oceans then causes microplastic accumulation in the marine food chain, which will ultimately impact humans, Na warned.

Na said that if people cannot stop using plastic once and for all, a realistic solution amid the increasing amounts of plastic waste is to come up with measures that can help people recycle more of it.

Na noted that plastic itself is not so much an issue. According to Na, making plastic produces less greenhouse gases than making glass and steel, adding that producing plastic and paper result in similar amounts of emissions.

The stake is rather on how much plastic we can recycle, and how much we can reduce plastic waste through recycling.

Na stressed that everyone involved in the life cycle of plastic products should join recycling efforts. Na particularly emphasized the importance of businesses’ participation.

“Plastic pollution is a matter of responsibility and survival when it comes to business entities,” Na said. As more and more countries around the globe are working toward introducing regulatory measures to solve plastic pollution, it has become increasingly important for companies to keep up with such a trend, Na added.

Na referred to the United Nations Environment Assembly meeting in Nairobi, Kenya in March this year, where 175 countries including South Korea agreed to consider a binding resolution to root out plastic waste pollution by the end of 2024.

Na said that companies can turn plastic pollution into a business opportunity, as there will be increases in demand for recycled plastic.

Na quoted McKinsey & Company’s 2018 report, which predicted that nearly 60 percent of plastics demand could be covered by production based on previously used plastics by 2050.

At the end of his session, Na also introduced SK Geo Centric’s recent efforts and corporate vision for plastic recycling.

“The company aims to become capable of recycling 2.5 million tons of plastic by 2027 and 8 million tons by 2050,” Na said. To achieve the goal, SK Geo Centric plans to construct a waste-plastic recycling cluster in the industrial city of Ulsan. Through the facility, which will start operations in 2025, the company expects to be able to annually recycle 300,000 tons of plastic waste and reduce carbon emissions by 500,000 tons every year.

In terms of recycling technology, SK Geo Centric has secured a technology for extracting oil from plastic waste and reusing the oil as feedstock for oil refining and petrochemical processes.

In partnership with Purecycle Technologies, a Florida-based plastic recycling company, the company will build a recycling facility with an annual capacity to process about 60,000 tons of recycled polypropylene.

The company has also invested in in Loop Industries, a Canadian-based company that owns patented depolymerization technology that can be used in recycling waste PET plastics and polyester fiber.

Na‘s presentation was followed by a talk between young ocean entrepreneurs Byeon Su-bin, President of Diphda Jeju and Won Jong-hwa, CEO of Foresys.

Byeon and Won focused on presenting private sector efforts to tackle plastic pollution in the oceans. The two entrepreneurs, who are running companies dedicated to solving plastic pollution, also agreed with the importance of plastic recycling.

Byeon, who collects plastic waste day after day on the beaches of Jeju Island, talked of the difficulties in collecting marine plastics. According Byeon, the only way to get rid of plastic waste at the moment is to manually pick it up. But the amount of plastic waste easily outweighs the amount that individuals can clean up, he said.

Byeon also warned about the increased accumulation of microplastic in the oceans and its impact on marine species.

Won emphasized that the government, as well as businesses, should make efforts to eliminate plastic waste in rivers and streams before it enters the oceans, where it becomes more difficult to collect.

”Without the oceans, no one will survive,” Won said, strongly insisting on the importance of keeping plastic waste out of the oceans.