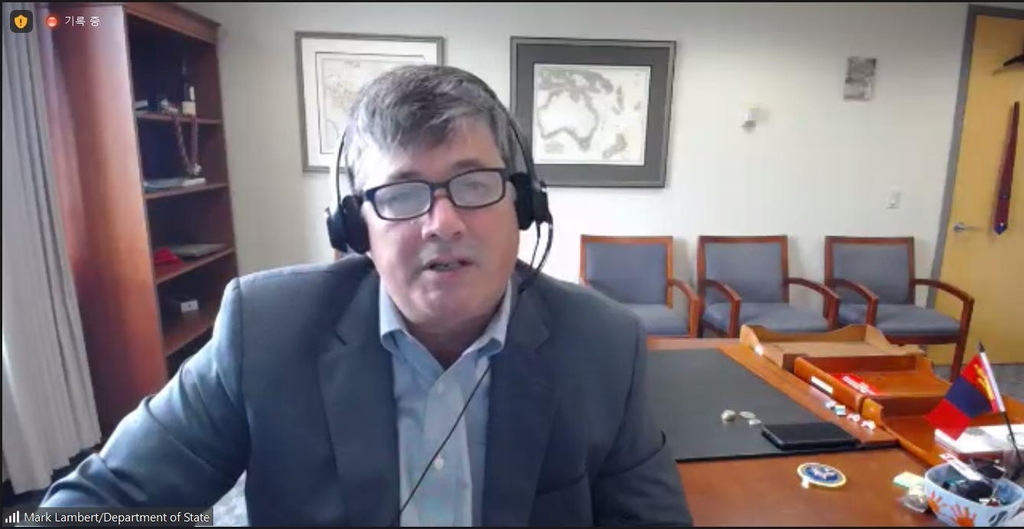 Mark Lambert, deputy assistant secretary of state for Korea and Japan, is seen answering questions in a virtual press briefing in Washington on Wednesday in this captured image. (Yonhap)

Mark Lambert, deputy assistant secretary of state for Japan and South Korea, also reiterated that the US remains open to dialogue with the North to discuss any issue.

"The US position remains unchanged even in light of these most recent escalatory actions. We continue to support humanitarian assistance and the provision of COVID-19 related assistance," he said in a virtual press briefing, organized by Washington Foreign Press Center.

"We have always viewed humanitarian assistance as a separate issue from making progress and achieving complete denuclearization of the Korean Peninsula," he added.

Lambert noted the North has now fired 23 ballistic missiles since the start of the year, "all of which violated multiple U.N. Security Council resolutions, and demonstrate that the DPRK continues to advance the capabilities of its unlawful WMD and ballistic missile programs."

The US diplomat reaffirmed the US' commitment to engage with Pyongyang in dialogue.

"The United States remains open to dialogue with DPRK on any issue and without preconditions. We urge the DPRK to work with the international community to facilitate the rapid vaccination of its population," said Lambert.

Pyongyang has avoided denuclearization talks with the US since late 2019.

Officials in Seoul and Washington have noted the North may be preparing to conduct a nuclear test in the near future.

Lambert argued US alliances with South Korea and Japan, as well as their trilateral cooperation, will only be strengthened by North Korean provocation, saying, "We will not be deterred from cooperating together, to keep our three countries and our interests secure." (Yonhap)