[ The Korea Herald – Send E-mail ]
[Newsmaker] Does skin color still matter in Korea?
As South Korea grows more multicultural, more voices call for legal framework to stop racial discrimination
By Yoon Min-sik
Published : May 25, 2022 - 15:35
Updated : May 25, 2022 - 15:40
Back in 2007, a small but significant step was taken by the Ministry of Education when it decided to revise school textbooks to remove a certain widely used phrase: “Our country has continued a tradition of a mono-ethnic country, which is rare in the entire world.”

Despite the government making various policies for the rising population of people with different ethnic backgrounds in recent years, Korean society hasn’t moved on from its long-held perception of homogeneity.

For a real change, the country needs to establish a legal framework that defines and punishes racial discrimination as a crime, experts and activists say.


Although the population still consists of mostly ethnic Koreans, the percentage of ethnic minorities with family ties in the country has been growing.

The most recent number from Statistics Korea, updated in July last year, shows that there were 197,730 naturalized South Koreans in the country as of 2020, roughly 0.4 percent of the total population at that point. The figure rose by 13,264 compared to the year before.

Other data from the same agency showed that 3 percent (237,000) of the country’s children were born of “multicultural” backgrounds, referring to those born to one or more parents who are either a foreigner or naturalized citizen. The percentage has risen each year from 2.1 percent in 2015.

Yet it is unclear exactly how much of the country’s population is “multicultural,” as South Korea’s Nationality Act does not automatically grant citizenship to those born in the country --especially to those born to two non-citizens. This creates a legal grey area where certain immigrants’ children cannot claim South Korean nationality, meaning it is unclear exactly how many of the aforementioned 237,000 children are South Korean citizens.

Nevertheless, the numbers indicate that there is an upward trend in the ethnic diversity of South Korea.

Ethnic minorities’ share of the population is expected to continue rising in this country. Many young people are delaying or giving up on getting married or having children. According to data released in March this year, the country’s total fertility rate – the average number of children a woman bears in her lifetime -- dropped to a new low of 0.81 last year.


Racial discrimination is not a crime in Korea


Last week, The Korea Herald reported on an influencer named Patrick Ramos’ altercation with bouncers at a Seoul club. The incident raised allegations of racism based on claims that the establishment doesn’t allow foreigners in.

Many, particularly from the immigrant community, claim that those who are not ethnic Koreans are often subject to racism. A 2020 survey by the National Human Rights Commission on immigrants in the country showed that 68.4 percent felt that racial discrimination exists in South Korea.

Perhaps due to the country’s short history of dealing with ethnic diversity, there is no law regulating race-induced discrimination or hate speech.

The validity of the claims aside, shops have the right to refuse service to a customer under clause 15 in the Constitution regarding freedom of occupation. This has been interpreted as including the freedom of operation based on legal precedents.

This means that even if the aforementioned club’s alleged racism can be verified, there are no legal grounds for punishment. As of now, such discrimination is subject to the National Human Rights Commission Act, which stipulates that the commission “recommends against discrimination without just cause.”

But there are no legal clauses specifying what constitutes discrimination or what the ensuing punishment should be. A recommendation is nothing but mere words.

In 2019, the rights commission said a local club denying an Indian-American entrance was discrimination based on race, but the club flat-out rejected its recommendation.

This has sparked calls for an anti-discrimination act. Various versions of such an act has been proposed, but has not yet been passed into law for over a decade. 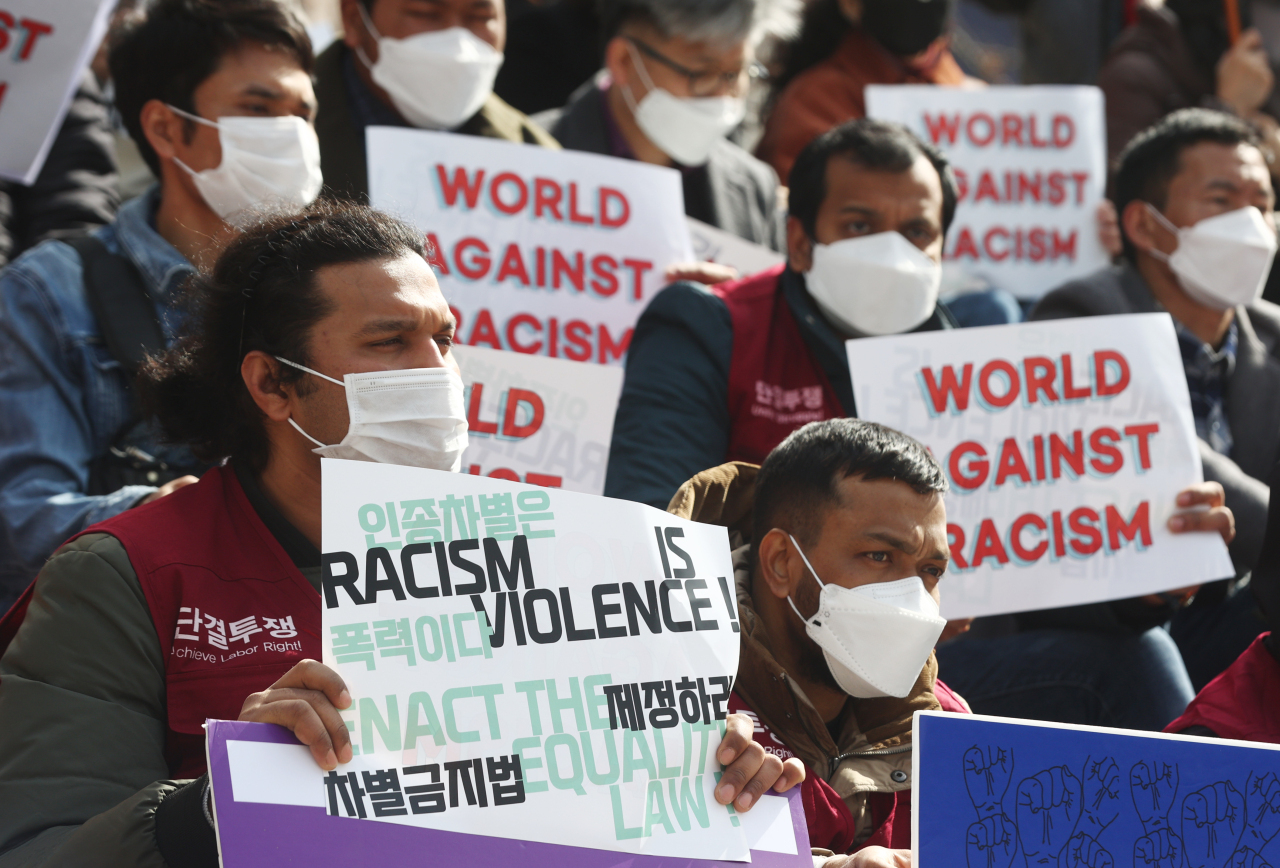 Members of the Migrants’ Trade Union hold a protest for enactment of the anti-discrimination law in Seoul on March 20. (Yonhap)

Udaya Rai, the leader of Migrants’ Trade Union in Korea, is one of the most vocal proponents for enacting an anti-discrimination law. “It would be justice to legally define discrimination, that no one in this country should fall victim to it. There is no such clause right now, and hate against migrant workers grow more severe each day,” Rai said.


On Wednesday, there was a public hearing on the enactment of an anti-discrimination act at a meeting of the parliament’s legislation and judiciary committee, with testimonies by legal experts recommended by the main opposition Democratic Party of Korea. The ruling People Power Party, who has been opposing the act, refused to attend the hearing.

Hong Sung-soo, a professor of law at Sookmyung Women’s University and one of the experts present at the hearing, urged the necessity for a comprehensive law defining discrimination in general.

“The right not to be discriminated against is a basic right stated on the Constitution, but it is not legally specified by the law. Many organizations including companies and schools have worked against discrimination, but there is not yet a legal basis against it,” he told the National Assembly committee. “The NHRC act is essentially a law about the organization and only briefly states what it defines as discrimination. This is because it is an act structured to be linked to other laws (against discrimination), which have not been enacted yet.”

In an interview with a local media outlet earlier this week, Hong explained that the essence of the anti-discrimination act is a “partial limitation of freedom in the private domain, if it is related to the public’s interest.” While the owner of a certain shop -- such as a restaurant or a club -- is entitled to one’s right in how to operate one’s business, this right can be limited if it infringes upon the public interest. 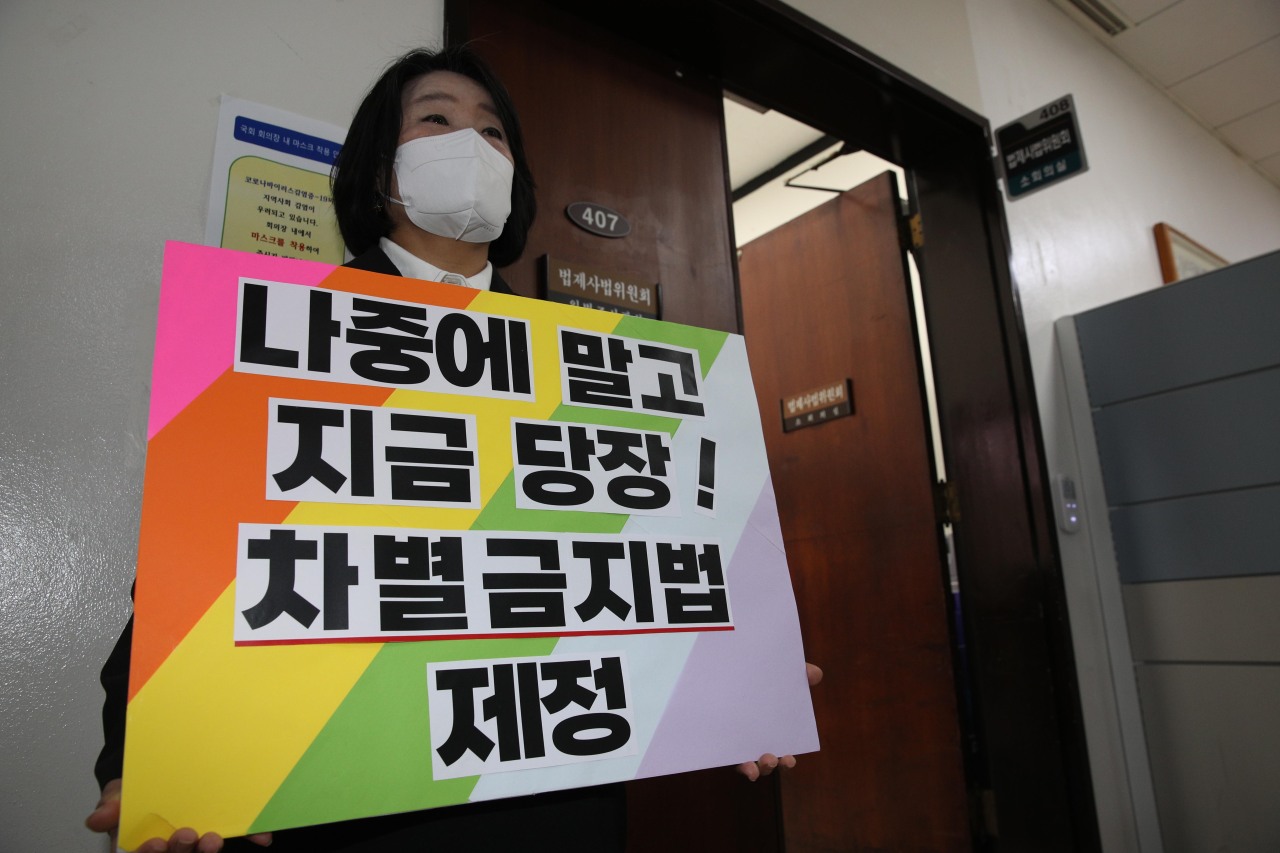 “For example, if a restaurant posts a sign saying, ‘No Muslims allowed,’ this would send a signal (to the public) that it is all right to run a business like that, so some limitation is inevitable,” Hong said.

Another issue linked to racism is the lack of regulation against hate speech. There was a landmark 2019 case when a 31-year-old man was fined for insulting an Indian researcher, marking the first case a South Korean was legally punished for a racist remark. However, the charges were for insult.

An insult can be constituted only if it has a specific target, which means hate speech against unspecified people or certain ethnic groups cannot be legally punished.

There are several countries across the world with varying levels of laws against inciting hatred against any identifiable groups. They include Canada and several countries in Europe such as Switzerland, Germany, France and the United Kingdom. African countries like Kenya and South Africa also have such laws. While neighboring Japan does not have an anti-hate speech law, there was a ruling in 2013 that ordered the ultra-nationalist far-right group Zaitokukai to stop hate speech protests against a Korean school in Kyoto and ordered the group to compensate the victimized school.

Discussions about regulation against hate speech and legislation of the anti-discrimination bill is an ongoing discussion in South Korea. Among the biggest complaints from the opposition is that the bill infringes upon people’s freedom of speech, especially in light of the country’s history of restricting it in the past.