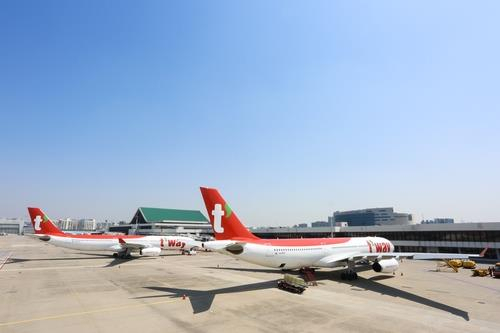 T'way Air, a South Korean low-cost carrier, said Wednesday it has added three A330-300 planes to its fleet to open a new route and resume flights on international routes amid eased COVID-19 virus curbs.

In February, T'way Air brought in its first A330-300 plane and has been operating it on the Gimpo-Jeju route since March 22. The second one arrived last month and the third has just been added.

With the latest two A330-300s, T'way Air plans to open the Incheon-Singapore route and to resume flights on the routes to Bangkok and Da Nang this month and Ho Chi Minh in July, the company said in a statement.

The budget carrier also plans to inject the planes into the routes to Singapore, Hawaii, Sydney and East Europe later this year, depending on recovery of travel demand, it said.

T'way Air has suspended most of its international routes since March 2020, as countries strengthened their entry restrictions over the pandemic.

To prepare for the post-pandemic demand, the company said it will bring an average of four large planes a year through 2027 while planning to introduce two 737-8 passenger jets, or 737-800 MAX planes, in the fourth quarter.

T'way Air plans to operate 20 large-sized planes and 30 mid- and small-sized ones by 2027 to achieve 3 trillion won in sales.