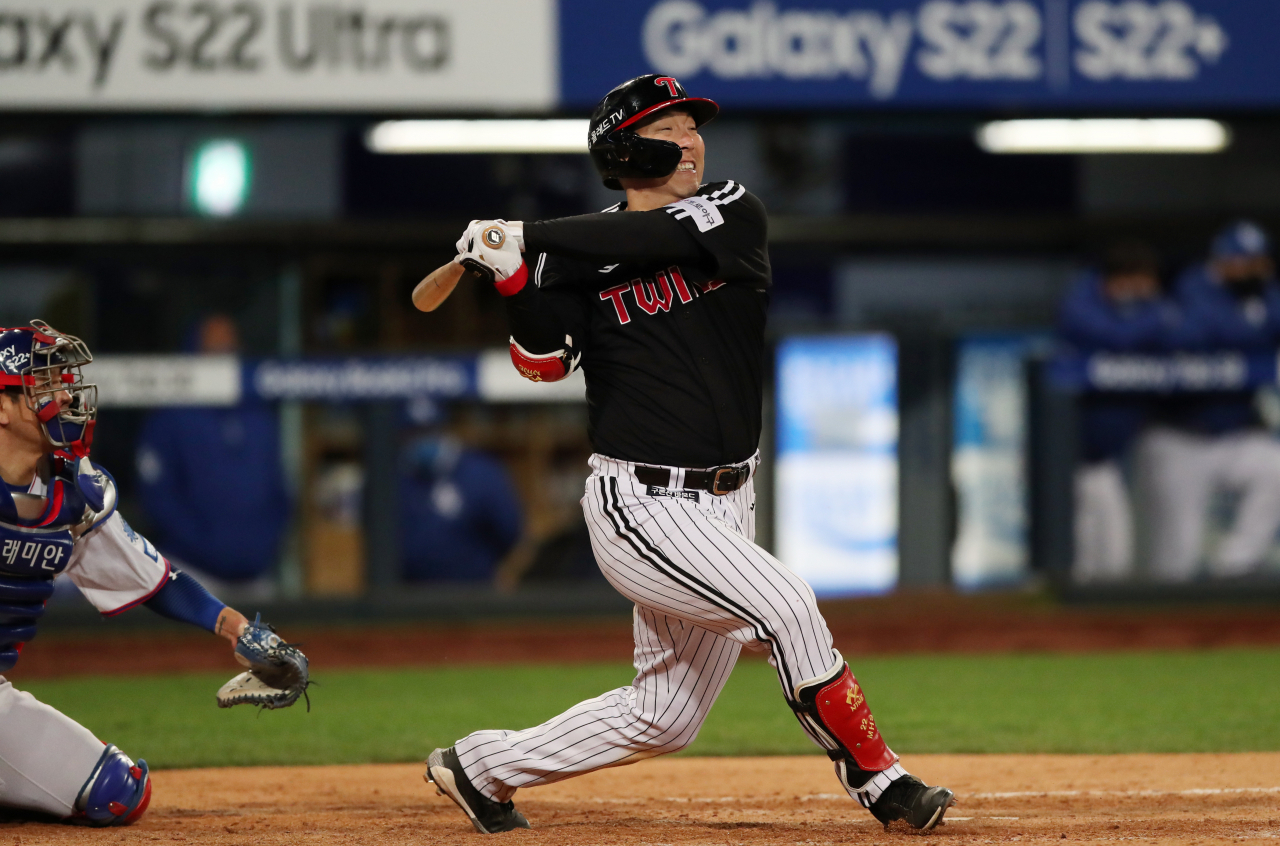 In this file photo from April 28, 2022, Kim Hyun-soo of the LG Twins hits a two-run home run against the Samsung Lions during the top of the ninth inning of a Korea Baseball Organization regular season game at Daegu Samsung Lions Park in Daegu, 300 kilometers southeast of Seoul. (Yonhap)

A pair of former major leaguers plying their trade back in South Korea will be closing in on offensive milestones this week.

Kim Hyun-soo of the LG Twins is six hits away from becoming the 16th player in Korea Baseball Organization (KBO) history to reach 2,000 career hits. With seven more RBIs, KT Wiz slugger Park Byung-ho will join 20 others in the 1,000-RBI club.

Kim, a two-time batting champion who led the KBO in hits in 2008 and 2009, has long been destined for a place among all-time hits leaders. The 34-year-old would already have surpassed the 2,000-hit mark if not for two years spent in the majors. He played for the Baltimore Orioles in 2016 and split the following year between the Orioles and the Philadelphia Phillies before returning home for 2018.

The Twins will have a six-game homestand starting Tuesday, with three games against the Kiwoom Heroes and three more against the Samsung Lions. Kim should be able to celebrate his milestone hit in front of home fans.

Park, a former Minnesota Twin, is in the midst of a bounceback season, as he leads the KBO with 14 home runs and 38 RBIs in 42 games.

Park, who joined the Wiz via free agency, had 20 homers and 76 RBIs in 118 games last year while playing for the Kiwoom Heroes. He may match those totals by the All-Star break in July this year.

Park has been a veritable RBI machine since turning his career around following a midseason trade from LG to the Heroes in 2011.

Park led the KBO in RBIs every year from 2012 to 2015, becoming the first player in league history to do so in four consecutive years. Park also set a single-season record with 146 RBIs in 2015.

Park spent the 2016 and 2017 seasons in the United States and returned home to drive in 112 runs in 2018. That made him the first KBO player to record 100 or more RBIs in five straight seasons.

This year, Park is on pace for his first 100-RBI season since that 2018 campaign.

Five players ahead of Park on the all-time RBI list are retired, and the sixth, Park Sok-min of the NC Dinos, remains suspended after violating COVID-19 health and safety protocols last year. Park Byung-ho should finish this year nestled inside the top 15.

The Wiz, defending Korean Series champions, are off to a sluggish start with a 19-24 record, which puts them in eighth place. This week, though, they will be playing the only two teams below them in the standings. They will visit the NC Dinos for the midweek series starting Tuesday, and will host the Hanwha Eagles for three more starting Friday.

The Dinos and the Eagles are tied for the worst record at 14-30. They are also the two worst pitching teams in the KBO, with the Eagles being the only club with a team ERA over 5.00 at 5.03. (Yonhap)