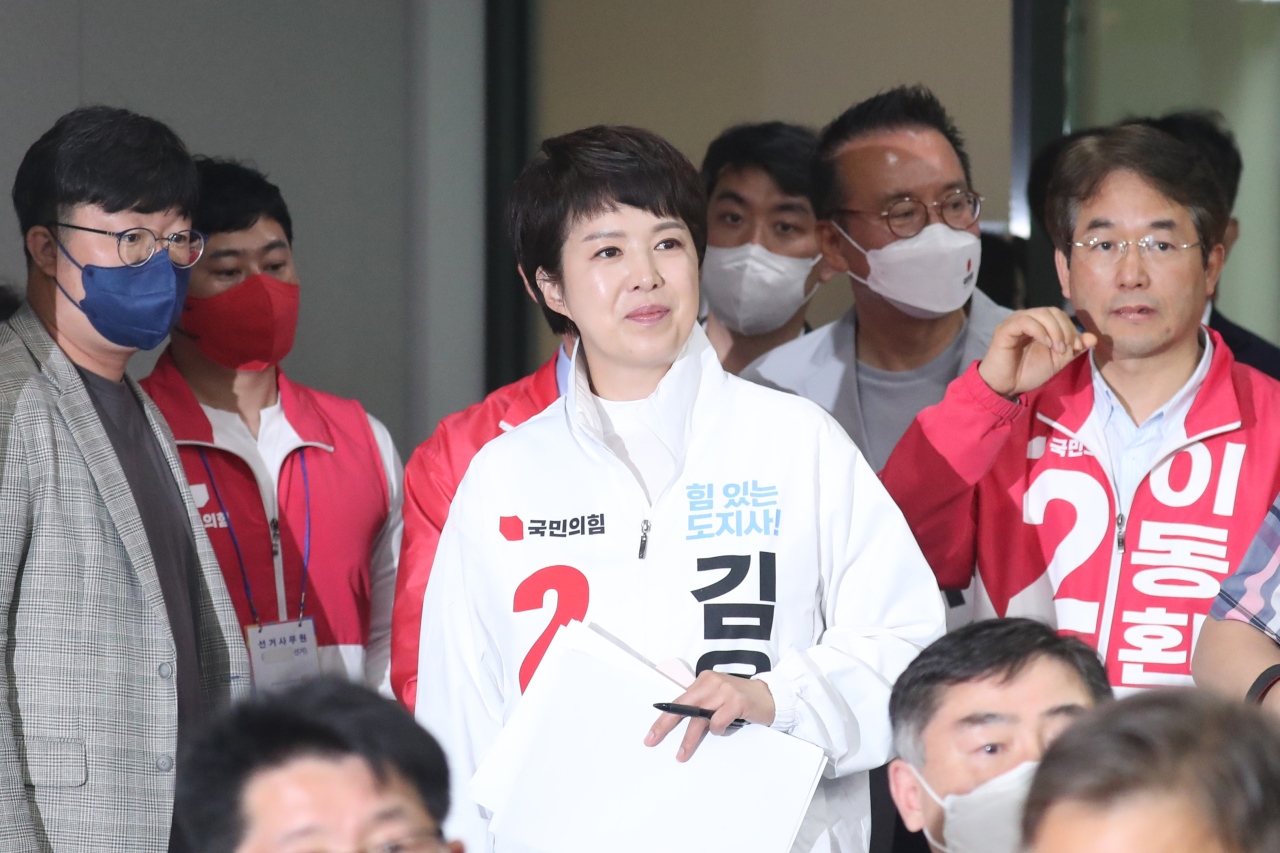 Kim Eun-hye of the People Power Party (center) is seen before delivering her key campaign pledges for northern Gyeonggi at a press conference held at Gyeonggi Provincial Office on Monday. (Yonhap)
In the upcoming June 1 local elections, a total of 126,668 foreign residents will be eligible to vote, according to the electoral rolls finalized Friday. The figure is an increase of some 20,000 from four years earlier, according to the National Election Commission.

Of them, 99,969 are Chinese nationals, accounting for nearly 79 percent of the total.

Amid a rise of anti-Chinese sentiment and resurgence of the right wing in South Korea, this dominance by the neighboring country is prompting second thoughts on foreigners’ suffrage.

First to bring up the issue this election cycle was former Rep. Kim Eun-hye of the conservative ruling People Power Party, who is running to be governor of Gyeonggi Province, home to the largest number of the group. As of June 2020, 593,300 foreign nationals were residing in the province, accounting for 35.5 percent of the total foreigner population in Korea.

“It is unfair that not a single Korean national can cast a ballot in China, when nearly 100,000 Chinese have the right to vote in Korea,” she wrote, stressing the “reciprocity principle” should be applied to voting rights of foreign nationals and real estate issues involving them.

Since 2016, South Korea allows foreign residents who meet certain requirements the right to participate in elections to pick heads of local governments and local council members. Currently, only those over the age of 18 who have obtained permanent residency for three years are allowed to vote.

Foreigners are not given suffrage in the presidential election or the general election for the National Assembly.

Kim’s rival in the Gyeonggi gubernatorial race, Kim Dong-yeon from the liberal Democratic Party of Korea, has taken the opposite stance, criticizing Kim for “inciting xenophobia with racist remarks.”

“Although reciprocity appears to be aimed at Chinese people, foreigners other than Chinese will eventually be deprived of their voting rights, according to Kim’s argument,” the candidate’s spokesman said in a statement on May 17.

Major advanced countries the US, Japan, Germany, France and the UK restrictively guarantee voting rights for foreigners in local elections, the aide added.

He refuted the ruling party candidate’s reciprocity principle argument, saying voting rights for foreign residents were granted in accordance with “the universally valid principles and standards of democracy that the right to elect a village representative should be guaranteed even for foreigners if they fulfill their duty to pay taxes.”