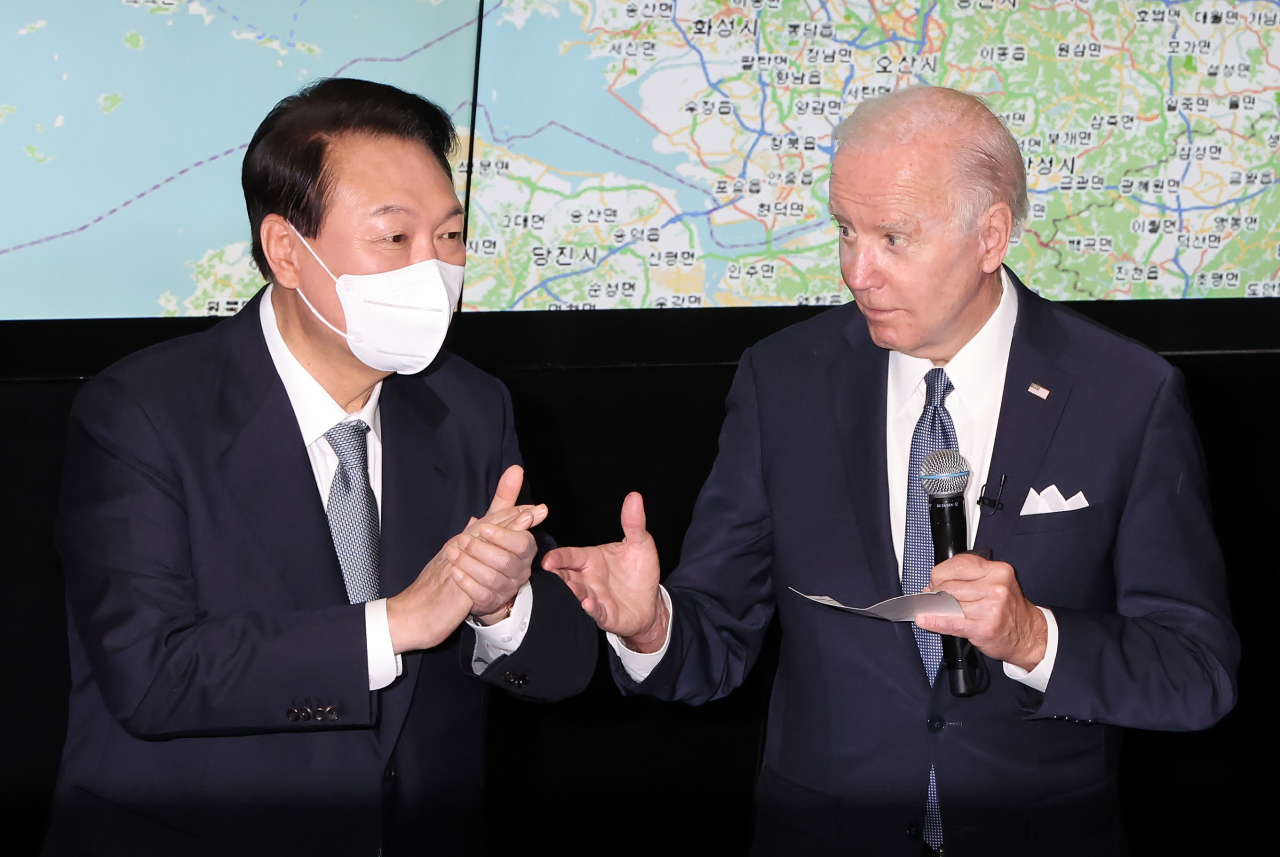 President Yoon Suk-yeol (left) and President Joe Biden at the Korean Air and Space Operations Center at the US Air Force Base in Osan on Sunday (Yonhap)
US President Joe Biden concluded his trip to South Korea after visiting a joint airspace control center on Sunday before leaving for Japan. During his three-day stay here, the two leaders reaffirmed their commitment to military and economic alliances and agreed to step up deterrence against North Korea.

Before ending his trip, Biden visited the Korean Air and Space Operations Center at the US Air Force Base in Osan, where the two nations’ militaries work to direct and control aerospace operations on the Korean Peninsula.

Yoon and Biden encouraged their soldiers who conduct joint Korea-US operations here at the base. The two leaders, who confirmed their commitment to a strong defense and practical extended deterrence principle in a joint statement the day before, also stressed a readiness posture against North Korea’s nuclear and missile tests.

Biden said, “All the American troops that are here and your families, thank you for what you do for our country and our allies.”

“Our alliance is formed through shared sacrifices of the Korean War. And several decades later, thanks to you, the Republic of Korea is a strong thriving democracy,” the US president said, adding the stability of the Korean Peninsula is not only for Korea but also for the world.

Yoon’s visit to the control center with Biden reflects the will of the two nations to respond strongly to North Korea’s increasingly sophisticated nuclear and missile provocations, the presidential office said in a written statement. The visit by the two leaders to the organization, which operates a Korean-style three-axis system of kill chain, Korean missile defense and massive punishment and retaliation, is “a symbolic scene” of a strong Korea-US security alliance.

Earlier in the day, Biden met with Hyundai Motor Group Chairman Chung Euisun. The Korean automaker announced on Sunday that it would build an electric vehicle production base, including a 6.3 trillion won ($4.9 billion) electric vehicle-only plant and battery cell plant in Georgia, in line with Biden’s visit to Korea.

Marking the end of his three-day journey with his visit to the airspace control center, Biden departed for Tokyo later in the day.

During his stay in Japan until Tuesday, the US president will attend the Quad Summit, a consultative group of four countries which include the US, Japan, Australia and India. Biden will also hold a US-Japan summit with Prime Minister Fumio Kishida.

President Yoon will declare the inauguration of the Indo-Pacific Economic Framework on Tuesday virtually and announce his intention to take a leading role in regional cooperation.

The main agenda of the three-day summit of the two allies was to strengthen their military and economic alliance, and step up deterrence against North Korea.

In a joint statement issued after the Korea-US summit on Saturday, the two leaders specified “nuclear, conventional and missile defense” as a means of “extended deterrence” that the US will provide to South Korea in case of emergencies.

This means that the two leaders have come up with a robust method of using nuclear capabilities as one of the extended deterrence measures the US provides to South Korea to deter the North. North Korea has recently rapidly raised the possibility of a preemptive nuclear attack.

North Korea has conducted 16 rounds of test-firing its missiles this year alone, and is reportedly preparing for a seventh underground nuclear test.

The two presidents also agreed to reactivate the high-level Extended Deterrence Strategy and Consultation Group at the earliest date. Both leaders committed to further strengthening deterrence by reinforcing a combined defense posture and reiterating their commitment to a conditions-based transition of wartime operational control.

When asked by a reporter whether there would be any preconditions for Biden’s meeting with North Korea’s Kim Jong-un at a press conference on Saturday, the US president said: “With regard to whether I would meet with the leader of North Korea, that’ll be depending on whether he is sincere and he is serious.”

He also offered a brief message to North Korean leader Kim Jong-un on the way out after meeting with Hyundai chief Chung on Sunday. When asked about his message for Kim by US reporters, Biden said, “Hello. Period.”

“We go together,” Biden told Yoon during a toast at the start of a state dinner on Saturday evening in response to Yoon’s statement that their relationship will deepen and their cooperation will be strengthened.

“(Our relationship) will develop into a high-tech alliance and a global comprehensive strategic alliance beyond a security alliance based on the universal values of liberal democracy, human rights and the rule of law,” Yoon said.

Yoon told Biden he would draw up a future vision of the Korea-US alliance with Biden.

During the summit, the two sides formalized South Korea’s participation in the IPEF, a US-led economic alliance.

At a joint press conference after the summit, Yoon said the two leaders decided to strengthen practical cooperation in new industries such as semiconductors and batteries, nuclear power, space development and cybersecurity.

Regarding the US’ IPEF, Yoon said the Indo-Pacific region is an essential region for Korea and the US. Korea and the US will work together to establish a norm-based order in the region, and “the first step is to participate in the IPEF,” he stated.

The two nations plan to elevate their strategic cooperation in economic and security fields to a higher level through cooperation in high-tech fields such as semiconductors, batteries, artificial intelligence and biotech.

The Korean presidential office kept its distance from some concerns that it might be used to contain China.

“There is not a single line in the full statement by the leaders of the two countries that excludes China from the supply chain,” said Wang Yun-jong, South Korea’s secretary of economic security, at a local press briefing after the joint press conference.

Regarding the IPEF, he said: “Rather than excluding specific countries, we are focusing on bringing supply chain stability among complementary countries.” He added that “there has not been a single discussion of excluding China from the supply chain at this summit.”