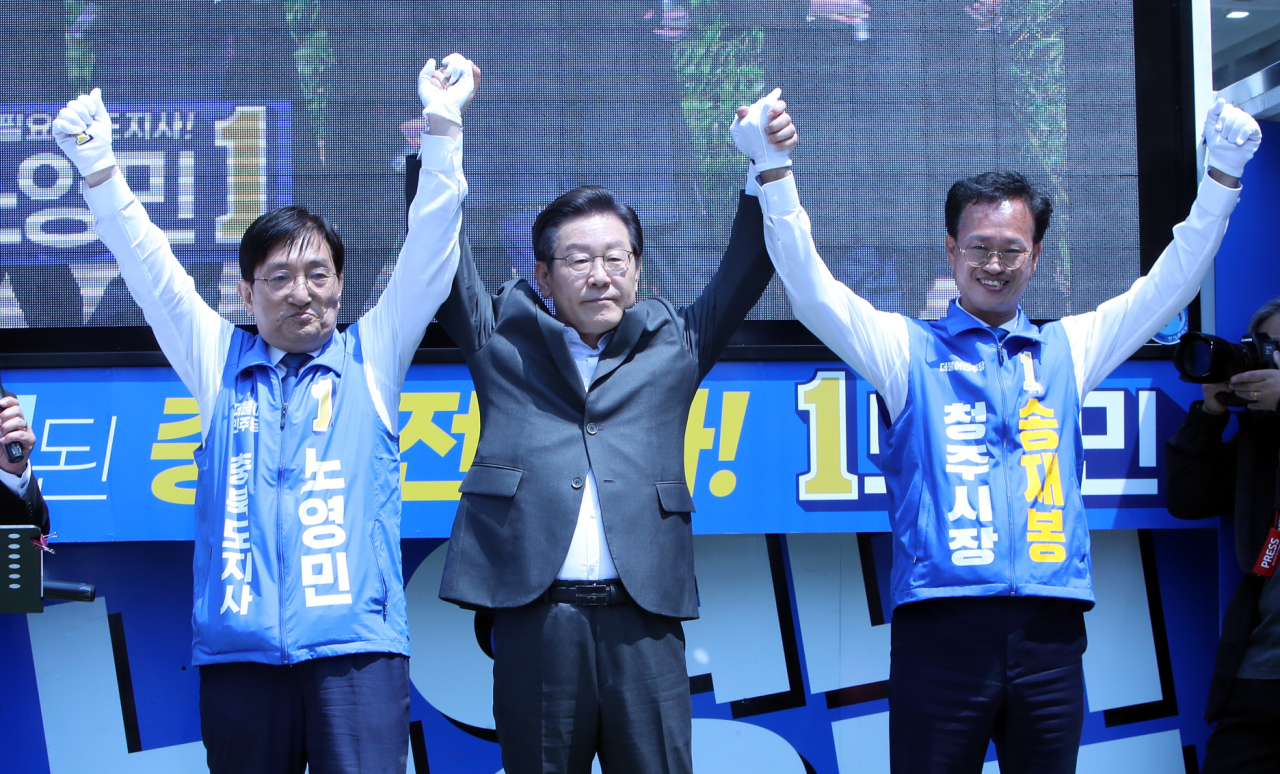 A survey of 880 voters of a constituency in Gyeyang-gu of Incheon from Thursday to Friday found Lee Jae-myung, chief of the Democratic Party’s local elections campaign committee and one of the central figures in the liberal party, trailing behind Yoon Hyeong-seon of the People Power Party by 3.7 percentage points.

It is the first time that Yoon surpassed Lee in an opinion survey. The two are running in a parliamentary by-election for the constituency in Incheon that is opening after Song Young-gil resigned to run for Seoul mayor.

Lee’s apparent slip in the party’s stronghold is seen as a sign that the main opposition may be facing a tougher battle in the local elections.

Lee is a central leadership figure with the party for the time being. He was the party’s presidential candidate, and is now leading the party’s local elections campaign committee.

But public sentiment toward the liberal party has quickly turned negative in recent weeks, as the party has faced growing criticism amid a series of sexual misconduct scandals and conflicts over moves of the recently inaugurated Yoon Suk-yeol administration.

One of the party’s main leaders has also faced growing criticism for starting internal feuds and making problematic comments in public.

Some supporters of the liberal party have publicly demanded the resignation of Park Ji-hyun, co-chair of the emergency steering committee of the main opposition party, for her overaggressive attacks on figures involved in the sexual misconduct scandals. Party supporters also demanded that Park resign for her denouncing of her detractors.

In light of recent developments, the Democratic Party lowered its expectations for the local elections, redefining its conditions for “success” and “victory.”

Lee said in a radio interview last week that he believes the party is facing a steep uphill battle in the local elections, taking back his earlier vow to lead the party to win at least nine out of 17 metropolitan mayoral and gubernatorial elections.

“We are in a situation where we would feel thankful to secure the Honam area,” Lee said, adding he believes it would be a success to win at least one region within the Greater Seoul area which also includes Incheon and Gyeonggi Province.

The People Power Party, on the other hand, has seen its support rise in recent weeks with the Yoon administration’s launch and the first summit between the presidents of South Korea and the US under the new administration.

The local elections take place just 22 days after Yoon’s inauguration, meaning public sentiment toward the Yoon administration will be directly reflected on the ballot. The People Power Party vowed to deliver the most successful local elections result the conservative bloc has ever seen.

Opinion surveys indicate that voters are increasingly looking to make their picks to help the Yoon administration get off to a successful start, rather than turning to the opposition to run checks on the government.