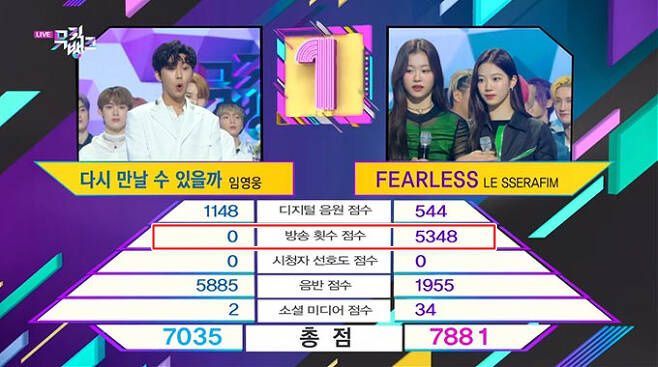 The aggregate scores of first place nominees Lim Young-woong (left) and Le Sserafim on KBS’ “Music Bank” on May 13. (Screen capture from KBS)
Public broadcaster KBS has come under fire over the scoring system of its music program “Music Bank” with some viewers raising the possibility of vote rigging despite explanations by the broadcaster.

On May 13, hugely popular trot singer Lim Young-woong’s “If We Ever Meet Again” and rookie girl group Le Sserafim’s “Fearless” were in contention for first place on “Music Bank.” The trophy went to Le Sserafim as the band scored 7,881 points, beating out Lim, who earned 7,035 points.

As soon as the result was unveiled, viewers, including Lim’s fans, took to the internet to complain about the “unfairness” of the score calculation and posted their grievances on KBS’ official website demanding an explanation.

The audience demanded KBS disclose details of Le Sserafim’s high broadcast score. In response to the controversy, the program’s chief producer said, “The points were counted from May 2 to May 8 and Lim Young-woong’s song ‘If We Ever Meet Again’ was not played on any of KBS’ television programs, radio shows and any kind digital content during the period.”

This explanation failed to appease some netizens who examined the playlists of KBS radio programs and argued that the song was, in fact, played several times during the period on the public broadcaster’s three radio stations.

KBS again attempted to clarify the matter. The broadcaster said, “There are seven selected radio programs that we count for the broadcast scores.” However, it refused to name the seven radio programs.