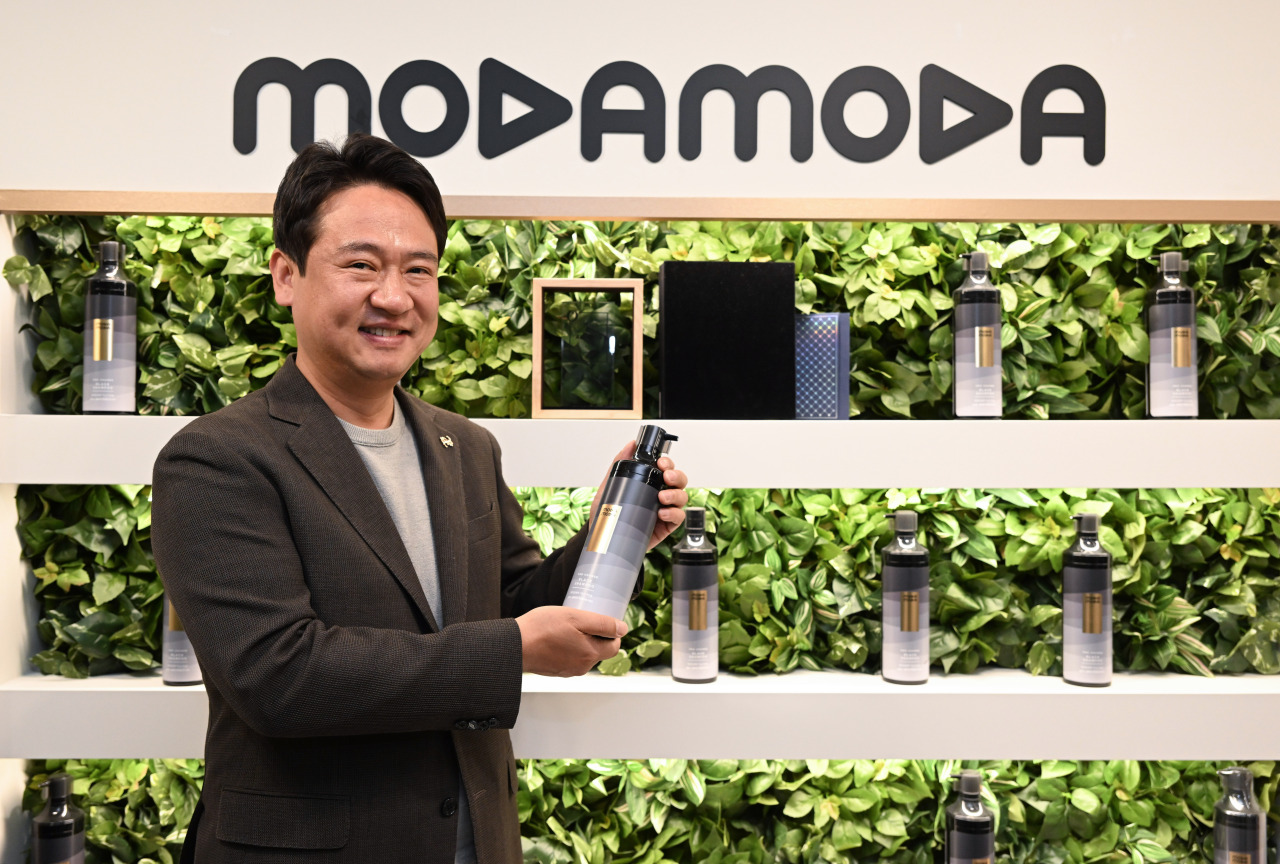 Bae Heung-jin, Moda Moda CEO, poses during an interview with The Korea Herald at the company headquarters in Songpa-gu on May 16. (Yim Se-jun/The Korea Herald)
Moda Moda, the South Korean producer of the world’s first coloring shampoo using the browning reaction in stale bananas, is seeking a breakthrough in overseas markets to sidestep cumbersome regulations at home.

The company is revamping overseas operations to extend its sales network connecting the US, China and Japan. Korean beauty products are increasingly popular in these countries, riding high on the popularity of K-content.

Unlike many other K-beauty brands that depend heavily on local retailers in their overseas push, Moda Moda has chosen a slower and harder path to become a truly global brand – focusing on brand strategy rather than sales alone.

“Most local brands fall into ‘K-beauty trap,’ that is, to focus on massive sales of products, rather than working on effective branding strategies,” said Bae Heung-jin, Moda Moda CEO, during a recent interview with The Korea Herald.

“However, to retail giants, we are just a good means to make money. Naturally, those who have taken shortcuts are thrown out of the global market – largely because they lose brand influence as duplicates quickly replace them.”

That’s why the company decided to launch its Pro-Change Black Shampoo last year first in the US, not Korea.

After receiving about $1 million in funding from Kickstarter, it set up a US branch in Delaware and a strategic office in San Francisco.

The shampoo sold more than one million bottles, making 30 billion won ($23.6 million) in the US just six months after its June launch there.

Bae said the product was considered a savior for many customers who had suffered from hair damage from frequent dyeing.

“We could’ve sold several hundred billion shampoos by depending on big US distributors. But instead, our Delaware branch started introducing our brand identity to customers and promoting the product step by step,” he said.

Following its successful debut in the US, the shampoo hit the Korean market last August and became an immediate success. Last year, its total sales exceeded 60 billion won both at home and abroad.

In Korea, however, the company faced regulatory hurdles with its pioneering technology, which led to a monthslong sales ban early this year. Taking advantage of the situation, both big and small rivals launched several replicas.

Amid an ongoing controversy over the use of 1,2,4-Trihydroxybenzene, or THB, in Moda Moda shampoo, Korean authorities in April decided to delay its final decision on allowing sales of the product by one year. Other countries like the US and Japan have no regulations on the use of THB.

“Our in-house experiment has already shown that THB is not toxic. On the other hand, our rivals still use hair dyes and tar in their coloring shampoo products, which could pose more harm for users,” the CEO said.

This year, the company plans to pour more resources into securing a firm footing in overseas markets under an ambitious goal of 300 billion won in sales around the world.

In the US, the company has joined hands with online shopping platforms like Ulta and QVC to further expand its presence there. In Japan, it is currently working on setting up sales operations.

It has recently opened its first branch in Shanghai to tap into the burgeoning beauty market. The company plans to hold seminars in China along with KAIST professor Lee Hae-shin, who is also co-developer of the shampoo, to discuss the economic value of polyphenol, the enzyme responsible for the browning in fruits, by inviting both Chinese and Korean academics.