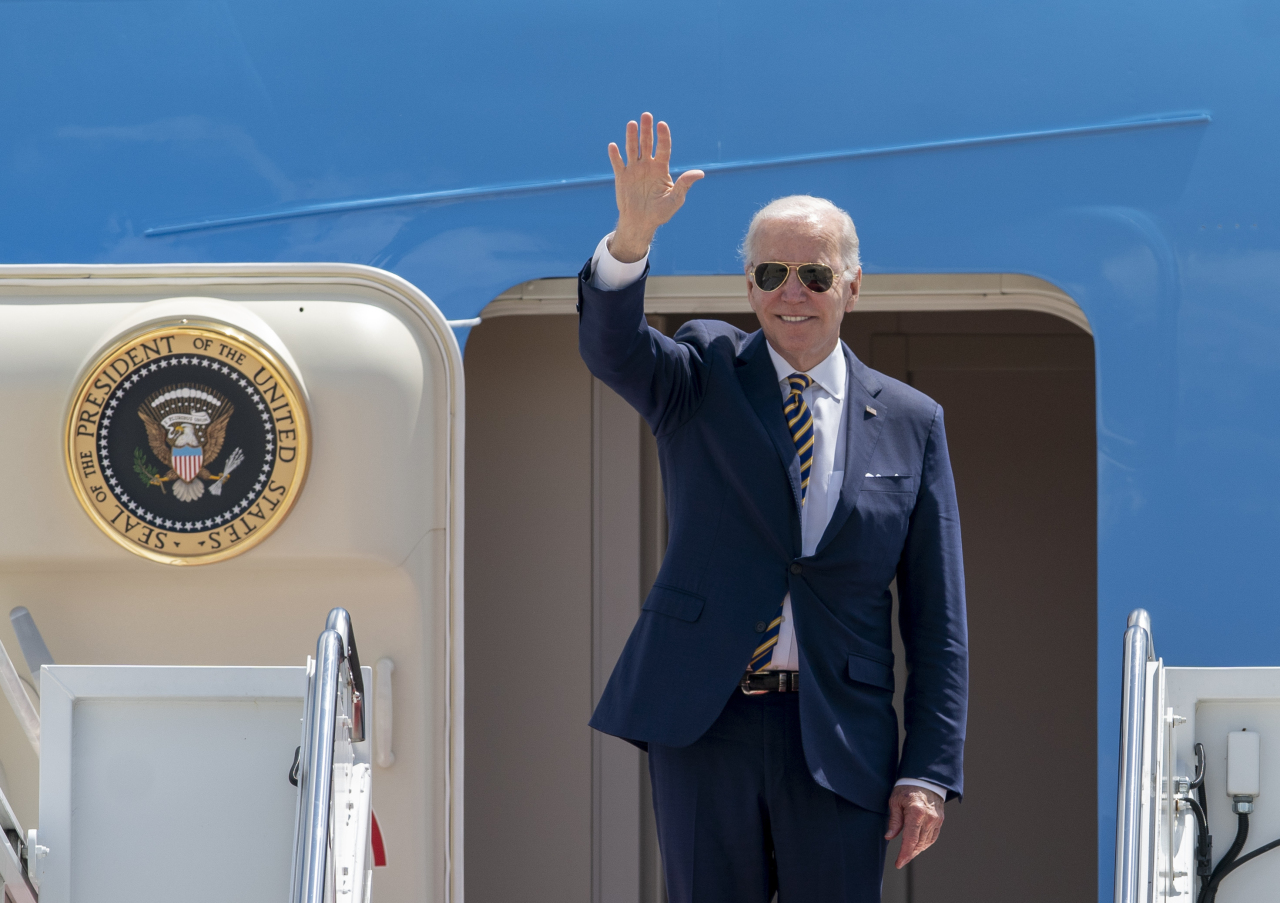 US President Joe Biden waves as he boards Air Force One for a trip to Korea and Japan at Joint Base Andrews, Maryland, on Thursday. (Yonhap)

US President Joe Biden will arrive in South Korea on Friday afternoon to begin his three-day visit focused on strengthening the Korea-US alliance.

After President Biden arrives at Osan Air Base in Pyeongtaek, Gyeonggi Province, he will move to the Pyeongtaek campus of Samsung Electronics to tour the world’s largest semiconductor production base.

President Yoon Suk-yeol will accompany him and Samsung Electronics Vice Chairman Lee Jae-yong will guide them through the facility. It is the first time that leaders of the two nations will visit a Samsung factory together.

They are expected to discuss how to create synergy between US chip design technologies and Korean manufacturing technologies. After the tour, the two leaders are likely to deliver a speech declaring their technology alliance.

On Saturday, Biden will visit the Seoul National Cemetery to pay respects to those buried there. Then, he will move to the presidential office in Yongsan and hold talks with Yoon.

The two leaders will hold a summit with a small number of people in the morning, followed by an expanded summit in the presidential office. They will announce the results of the talks at a joint press conference later in the day.

The talks will focus on dealing with North Korea’s nuclear weapons program, economic security and regional cooperation. Both countries expect this to serve as an opportunity to advance the Korea-US alliance into a “comprehensive strategic alliance.”

As North Korea’s seventh nuclear test and intercontinental ballistic missile test launch are known to be imminent, measures to strengthen deterrence against the North are expected to come up during the summit meeting.

Biden will participate in an official dinner hosted by President Yoon, scheduled to start at 7 pm. The event will be attended by 80 people, including the heads of 10 major business groups.

The US president will visit Osan Air Base on Sunday to encourage US and Korean troops. He will also meet with Hyundai Motor Group Chairman Chung Euisun to thank him for his investment in the state of Georgia.

Yoon is expected to accompany Biden in Osan, before he leaves for Japan later in the day.