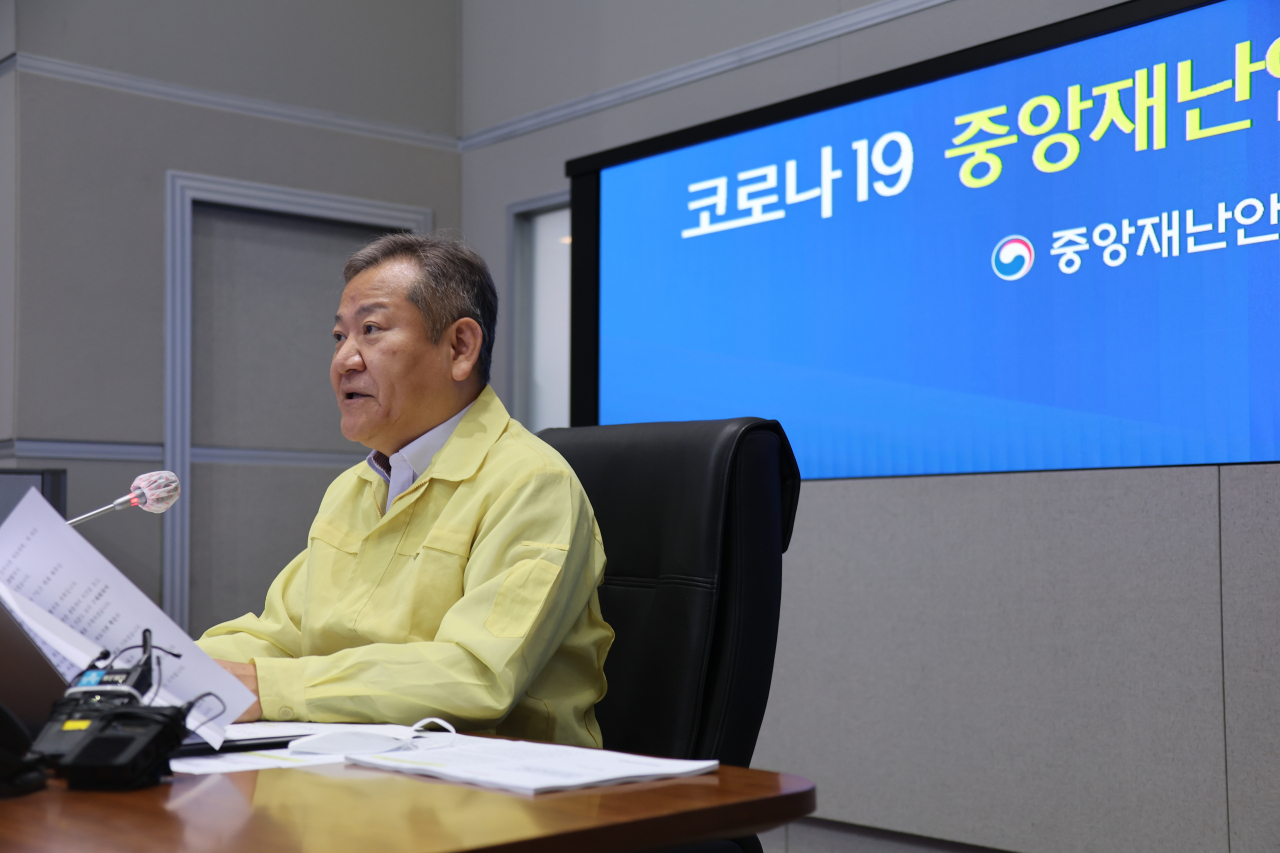 Interior Minister Lee Sang-min speaks during a government meeting on COVID-19 responses at the central government complex in Seoul on Friday. (Yonhap)

South Korea's new COVID-19 cases fell for a third consecutive day to stay below 30,000 on Friday, as the government pushed back the plan to relax more virus restrictions, citing the continuing omicron wave and possible spread of other variants.

The daily counts have steadily declined this week, from 35,113 on Tuesday to 28,130 on Thursday, apart from the Monday tally of 13,292. The infection numbers tend to fall sharply on Mondays due to fewer tests.

The highly transmissible omicron wave has peaked in South Korea after the daily count hit over 620,000 in mid-March.

The country added 43 deaths from COVID-19 on Friday, putting the total at 23,885, with the fatality rate standing at 0.13 percent.

The number of critically ill patients came to 251, down from the previous day's 274.

The modest decline in the virus curve has given a boost to the government's efforts to restore pre-pandemic normalcy, enabling it to lift most of the virus restrictions, such as the cap on private gatherings and business curfews.

The government, however, announced Friday it will push back the plan for the next relaxation steps, including the lifting of a seven-day quarantine mandate for COVID-19 patients, for another four weeks.

"Highly contagious new variants have been detected in the country, and concerns are being raised over deteriorating vaccine effects and immunity," Interior Minister Lee Sang-min said at a virus response meeting.

"We'll maintain the seven-day quarantine mandate and will reevaluate the situation after four weeks," Lee said.

The current measures will thus be in place until June 20.

Health authorities had set a four-week interim period for preparations before taking the next post-pandemic steps, centering on removing the quarantine mandate. The interim period was due to end Friday.

As of midnight Thursday, 44.56 million, or 86.8 percent of the population, had completed the full two-dose vaccinations, and 33.25 million, representing 64.8 percent, had received their first booster shots. A total of 3.70 million people had gotten their second booster shots, the KDCA said. (Yonhap)