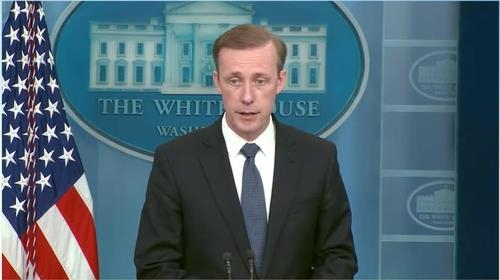 US National Security Advisor Jake Sullivan is seen answering questions in a press briefing at the White House on Wednesday in this image captured from the White House's website. (Yonhap)

The United States is committed to engaging with North Korea in serious dialogue and is willing to take "action for action" with North Korea toward the complete denuclearization of the Korean Peninsula, National Security Advisor Jake Sullivan said Thursday.

It marks a rare occasion a ranking US official has confirmed US willingness to reciprocate North Korea's denuclearization measures.

"(We) made no bones about the fact that since the very beginning of this administration, we have reached out to North Korea to say that we are prepared to sit down and talk without preconditions, to discuss a pathway forward, to make progress toward the ultimate goal of the denuclearization of the Korean Peninsula," Sullivan told reporters aboard Air Force One en route to South Korea.

Sullivan is accompanying President Joe Biden on his six-day trip to Asia that will also take him to Japan from Sunday (local time).

The top national security advisor noted Pyongyang remains unresponsive to US overtures, saying, "Thus far North Korea has not displayed any indication of willingness to engage in meaningful or constructive diplomacy."

Pyongyang has avoided denuclearization talks with the US since late 2019.

The North accuses Washington of having hostile intent toward the country, and says it will not engage in dialogue until the US first abandons its hostile policy.

Sullivan said the US will continue to remain open to dialogue but also maintain pressure on the reclusive country until the North returns to the dialogue table.

"And as long as they continue to refuse to do so, we will continue to stay on the course we are on, which is to impose pressure, to coordinate closely with our allies and to respond to provocations with clarity and decisiveness," said the White House official.

Sullivan also reiterated the possibility of North Korea staging additional provocations during or after Biden's first trip to Asia, but said the US is fully prepared to respond.

"We have been forthcoming in downgrading and releasing our intelligence and our analysis that there is a genuine possibility, a real risk of some kind of provocation while we are in the region, whether in South Korea or in Japan, that could take the form of a nuclear test," he told reporters.

"We are prepared for those eventualities. We are coordinated closely with both the ROK and Japan. We know what we will do to respond to that," he added, referring to South Korea by its official name, the Republic of Korea. (Yonhap)