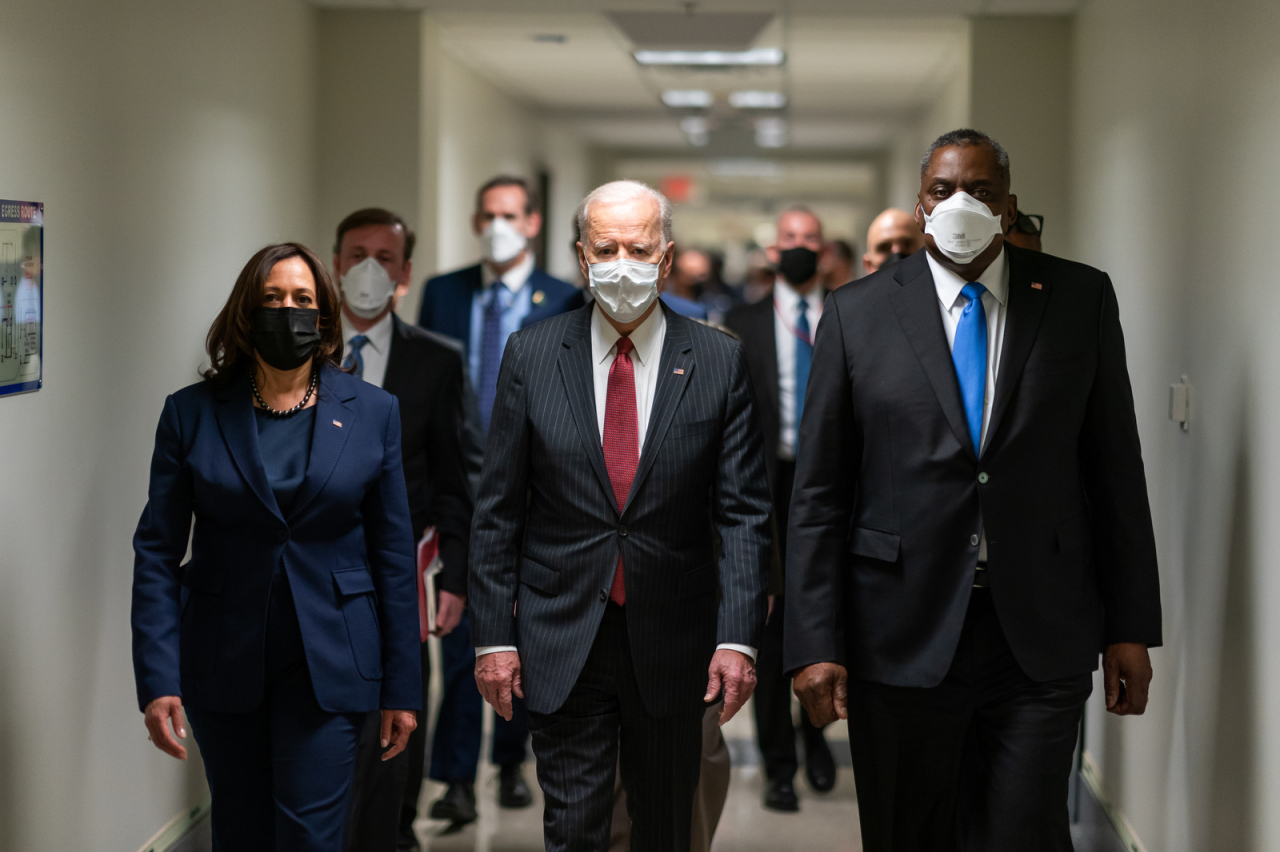 President Joe Biden and Vice President Kamala Harris, joined by Secretary of Defense Lloyd Austin, tour the Pentagon Wednesday, Feb. 10. 2021, in Arlington, Virginia. (File Photo - White House)
The White House said Wednesday that the US is ready to adjust its “short and longer-term military posture” regarding North Korea and handle “all contingencies,” including major weapons tests during the US president’s trip to South Korea and Japan.

US national security adviser Jake Sullivan reaffirmed the US defense commitment to the regional key allies and warned that North Korea could conduct long-range missile and nuclear tests on the occasion of President Joe Biden’s first emblematic trip to the Indo-Pacific region between May 20 to 24.

“We’ve indicated in quite clear terms that our intelligence does reflect the genuine possibility that there will be either further missile tests -- including a long-range missile test -- or a nuclear test or, frankly, both, in the days leading into, on, or after the President’s trip to the region,” Sullivan told a televised White House press briefing.

North Korea has not conducted major weapons tests during any US president’s visit to South Korea. But Sullivan emphasized that the Biden administration is ready to deal with any scenario.

Sullivan went on to say that he discussed North Korean issues with China’s top diplomat Yang Jiechi during the phone talks on Wednesday, which followed by their in-person meeting in March in Rome.

“We are preparing for all contingencies, including the possibility that such a provocation would occur while we are in Korea or in Japan. We are coordinating closely with our allies in both Korea and Japan on this,” said the US national security adviser.

Kim Tae-hyo, first deputy director of the presidential National Security Office, on Wednesday said South Korea and the US have devised “Plan B” which enables South Korean President Yoon Suk-yeol and Biden to immediately command and control the combined forces in case North Korea presses with missile and nuclear tests during Biden’s three-day visit to Seoul between Friday and Sunday.

US intelligence authorities have detected the signs of North Korea gearing up for an intercontinental ballistic missile launch near Pyongyang, while the South Korean presidential office on Wednesday publicly said the preparation appears to be “imminent.”

South Korea’s National Intelligence Service on Thursday told the National Assembly’s Intelligence Committee that North Korea has “completed preparations for a nuclear test and is gauging the timing,” according to lawmaker Ha Tae-keung, who attended the closed-door briefing.

Enhance military readiness
During a White House briefing on Wednesday, Sullivan clarified that the US would reinforce military readiness if it was needed to defend South Korea and Japan and to provide extended deterrence against North Korean missile and nuclear threats.

“And we are prepared, obviously, to make both short- and longer-term adjustments to our military posture as necessary to ensure that we are providing both defense and deterrence to our allies in the region and that we’re responding to any North Korean provocation.”

The Biden administration has enhanced military readiness in Asia as North Korea has heightened tensions by consecutively launching ballistic missiles including an ICBM.

The US Indo-Pacific Command in March said it has enhanced intelligence, surveillance, and reconnaissance capabilities and ballistic missile defenses on the Korean Peninsula. In April, the US nuclear-powered aircraft USS Abraham Lincoln operated in the international waters of the East Sea and conducted bilateral exercises with the Japan Maritime Self-Defense Force.

Sullivan’s remarks are also noteworthy as the US and South Korea will discuss a wide range of options to strengthen the viability of the US extended deterrence and their combined defense posture as the key agenda for the summit scheduled for Saturday.

Extended deterrence is the US’ commitment to deter or respond to adversaries’ coercions or nuclear and non-nuclear military attacks on US allies and partners. The US nuclear umbrella is one means the US offers to achieve extended deterrence.

First deputy director Kim on Wednesday underscored that the Yoon Suk-yeol government’s priority during the summit is to come up with an “action plan to make the US extended deterrence credible and effective.”

The regular operation of the high-level Extended Deterrence Strategy and Consultation Group or EDSCG which has been suspended since January 2018 and the resumption of the South Korea-US major regular military exercise will be discussed, Kim said.

A South Korean military official, who wished to remain anonymous due to the sensitivity of the issue, said Thursday that the two countries had considered plans, including the deployment of US strategic assets and trilateral military exercises among South Korea, Japan, and the US.

The US also views the enhancement of extended deterrence capabilities as the key means to contain threats from its adversaries in the Indo-Pacific region and invigorate alliances in support of US national security.

“Our extended deterrence relationships with both Japan and the Republic of Korea are instrumental to deterring threats in East Asia, including those emanating from the DPRK,” US Assistant Secretary of Defense for Space Policy John Plumb said Tuesday in a written statement presented to the House Armed Services Committee Strategic Forces Subcommittee.

Plumb underlined that the US will continue to hold extended deterrence dialogues with South Korea and Japan, as well as Australia.

“We look forward to taking steps to enhance and strengthen these extended deterrence relationships as we confront growing regional threats.”