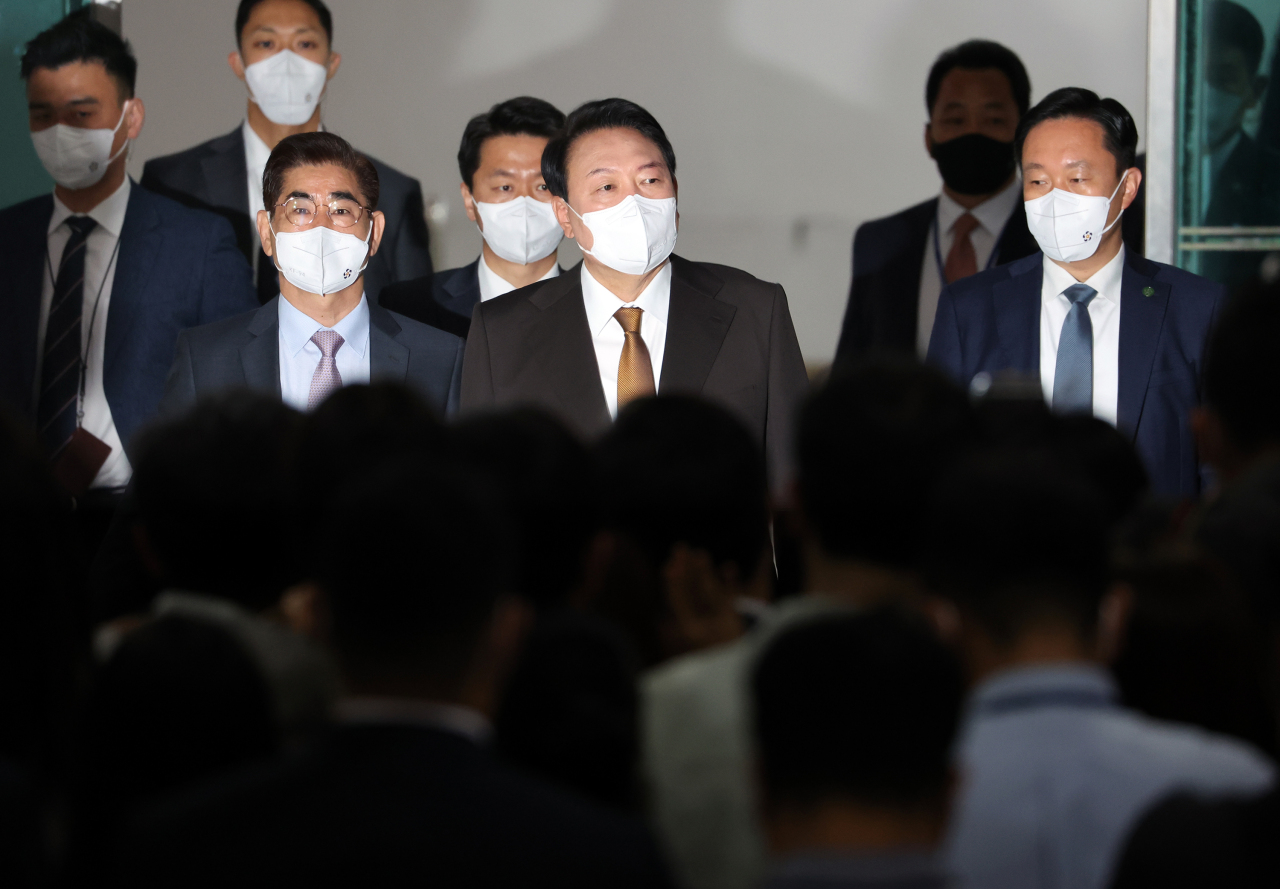 President Yoon Suk-yeol (Yonhap)
South Korea will expand its military and economic alliance with the US to include technology at the upcoming summit this weekend, seeking to join a US-led new coalition that will set new trade and supply chain rules, a senior security official said Wednesday.

US President Joe Biden will arrive in Korea on Friday afternoon and visit Samsung Electronics’ chip facilities in Pyeongtaek. The next day, he will hold a summit with President Yoon Suk-yeol and attend an official banquet along with various business leaders, including the heads of major corporations, in the evening.

Regarding the significance of this summit, Kim Tae-hyo, first deputy director of the National Security Office, told reporters, “The military alliance that has been maintained over the years based on a value alliance expanded to an economic alliance through the Korea-US FTA. We anticipate that the Korea-US technology alliance will be added at the summit.”

As a concrete plan for the Korea-US technology alliance, the Indo-Pacific Economic Framework led by the Biden administration will be launched on the occasion of his visit to Korea and Japan.

President Biden will discuss the issue of launching the IPEF in Japan after visiting Korea, and President Yoon plans to attend the meeting virtually.

The IPEF has a nature of checking against China, but Kim said, “There is no need to view the IPEF simply as a hostile decoupling between great powers. It’s not against China. There is already a Korea-China FTA, and a follow-up agreement (with China) is being discussed.”

Regarding the possibility of North Korea’s nuclear test around Biden’s visit to Korea, Kim said it is evaluated as relatively low. But preparations for a missile launch, including intercontinental ballistic missiles, are understood to be “imminent.”

His remarks come after CNN reported Pyongyang appears to be preparing for a possible intercontinental ballistic missile test within the next 48 to 96 hours, in time for US President Joe Biden’s visit to Seoul and Tokyo this weekend.

An official familiar with the matter told CNN that a government assessment shows that “things we have noticed in the past for a launch are the things we are noticing now.”

If a “large or small provocation occurs” during the Korea-US summit, Kim said, “We have a plan B in place that the two leaders will immediately take command of the ROK-US combined defense posture and command” even if it has to change the summit schedule.

So far, the North has conducted 16 rounds of test-firing its missiles, ICBMs that are assumed to be capable of hitting the mainland United States.

The reclusive regime also appears to be preparing for a seventh underground nuclear test at its Punggye-ri nuclear test site, according to assessments from Korean and US intelligence agencies. If carried out, the nuclear test would be the first in nearly five years, since the last test in 2017.

When asked if Biden plans to visit the Demilitarized Zone, Kim said, “Biden already visited (the DMZ) when he was vice president. We are preparing for a security event with a different concept in different places.”

Regarding the possibility of supporting vaccines for North Korea, he said, “The US has also expressed an interest in (helping) North Korea, but there has been no response so far.”

Biden is also considering a plan to meet with former President Moon Jae-in on Sunday before he leaves. But Kim said he does not know about the communication between the former administration and President Biden.

By Shin Ji-hye and Jo He-rim