[ The Korea Herald – Send E-mail ]
[Newsmaker] Cryptocurrency crashes take a mental toll on young investors
From depression to suicidal thoughts, crypto crashes could have serious consequences for youth who have pinned hopes on risky assets
By Yim Hyun-su
Published : May 18, 2022 - 15:21
Updated : May 19, 2022 - 15:35 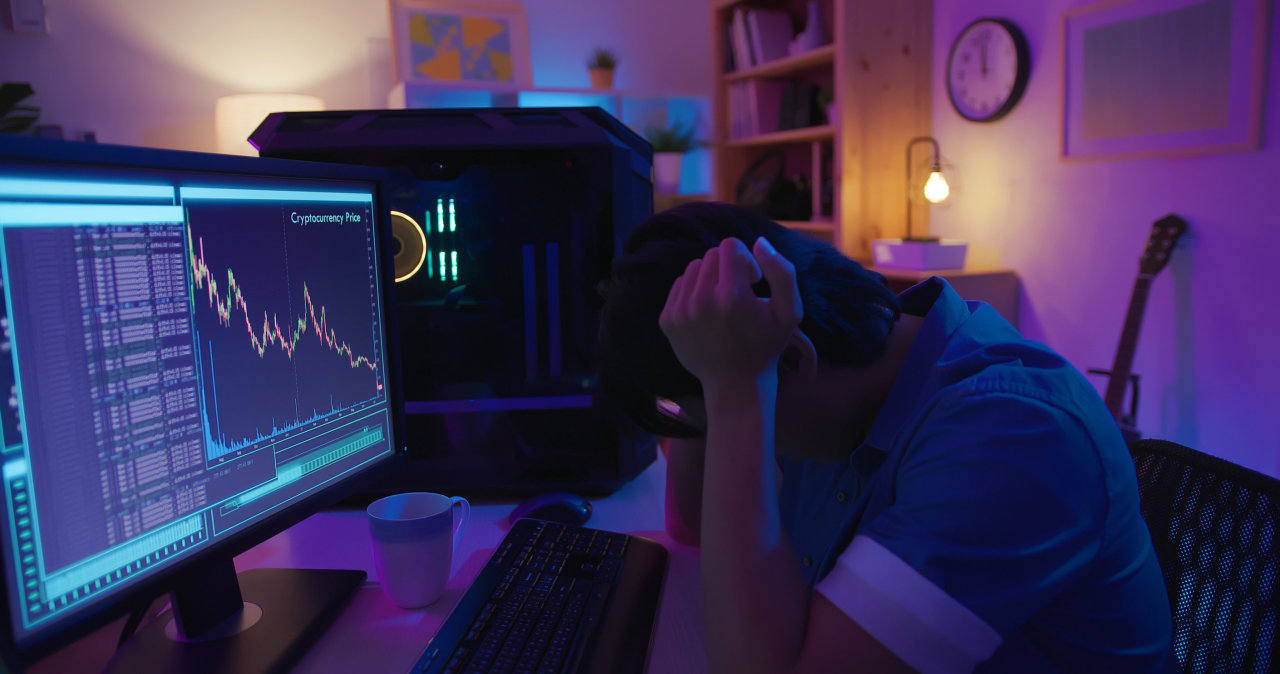 (123rf)
“Where did all the posts about Luna go? Have you guys all gone to Han River?”

This anonymous comment on the Bitcoin section of online community DCinside captures the depressing mood of online cryptocurrency communities in recent days.

The crash of Korean-made cryptocurrency terraUSD, also known as UST, and its sister token luna, has made headlines around the world as its impact was felt in the global cryptocurrency market.

“Going to Han River” – a rather dark phrase often used jokingly among stock and cryptocurrency investors when they see big losses – implies a suicide as an escape from the sad reality.

The keyword “Mapo Bridge” also surged in popularity on web portal Naver over the weekend, according to Naver‘s Data Lab, as the price of UST and luna collapsed.

As Terra saw nearly $45 billion evaporate from its market cap, according to reports by Bloomberg, a collective sigh was heard among investors across online spaces.

“I heard through the grapevine that an acquaintance of mine made an extreme decision (of committing suicide) after losing all of their savings through investing in luna,” one tweet read.

“Every time I hear about such sad news, I’m reminded of the quote ‘There is no such thing as free lunch,” another tweet read.

A video clip also went viral on Twitter in which Kwon Do-hyung, the Korean entrepreneur behind the company Terraform Labs, discussed how most cryptocurrencies would end up “dying.”

“95 percent [of coins] are going to die, but there’s also entertainment in watching companies die too,” he said during an interview with chess streamer Alexandra Botez, which drew ire from some TerraUSD and luna investors.


When stocks or cryptocurrency drastically crash, similar to how the price of luna went from 107,844 won on May 5 to 0.25 won on Tuesday according to digital currency platform Coinbase, investors suff a “sudden sense of loss,” said Kwak Geum-joo, a professor of psychology at Seoul National University.

“Imagine if your possessions had suddenly disappeared. In the case (of luna), it was gradual and over the course of a few days but investors did not see it coming. They did not have time to prepare psychologically for the loss of their possessions.”

Whether it is the death of a person who was close to you or losing your savings, the severity of the sense of loss can be devastating and manifest in various emotions -- ranging from sadness to anger.

One crypto streamer was summoned by police on Monday over charges of trespassing after visiting Terra creator Kwon’s home uninvited last week. He is accused of ringing the doorbell and running away after finding the location on the internet.

Anger appears to have played a role in his act as the streamer told the press that Kwon should apologize officially after being questioned by police.

“Kwon should publically apologize and announce plans (to compensate) using his assets or otherwise,” the man told the press outside Seoul Seongdong Police Station.

“I know people around me who have given up on their life,” said the streamer as he called on Kwon to take responsibility.

When faced with a sudden loss, humans try to find the cause, Professor Kwak explained.

“People want to find whether it was their own fault or someone else’s and then put the responsibility on the target. In this case, it’s the developer. If you had invested in stocks, for example, you could blame yourself for having done it. If you were talked into investment by a bank, the blame could be on the bank clerk,” Kwak said.


The appeal of risky investment


In a meeting with the National Policy Committee on Tuesday, Koh Seung-beom, chairman of the Financial Services Commission, said the prices and transaction trends of luna and TerraUSD are being “closely watched” and measures to protect investors are being mulled.

In the United States, Treasury Secretary Janet Yellen called for stablecoin regulation by the end of this year following the Terra crash.

“A stablecoin known as TerraUSD experienced a run and declined in value. I think that this simply illustrates that this is a rapidly growing product and there are rapidly growing risks,” Yellen said during a recent hearing before Congress.

But despite warnings from experts, the cryptocurrency market is booming. And the boom in South Korea is in part propelled by the country’s “compressed” economic growth, said professor Kwak.

“South Korea achieved its economic development in 45 years. The United Kingdom took 200 years, the United States around 150 years and Japan 90 years. Against this backdrop, South Koreans are more interested in speculation -- purchasing an asset in hopes that it will become more valuable in the near future.

“In this country, you can see people with land or buildings in Gangnam get drastically richer within one generation. The success story could’ve been your uncle or someone you know. And with cryptocurrency investment, you hear about friends you know become richer overnight. In addition, young people do not feel they can buy a home despite working hard. In a sense, cryptocurrency investment highlights an aspect of South Korean society.”