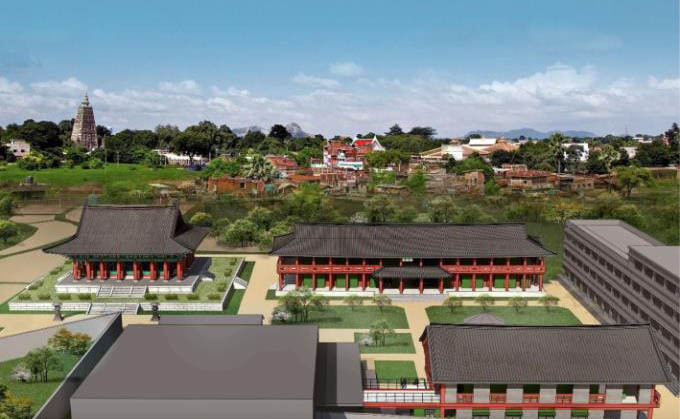 Bunhwangsa, a Korean Buddhist temple, will open in Bodh Gaya, India on Saturday with a delegation of 150 Korean Buddhists from the Jogye Order – South Korea’s largest Buddhist sect -- attending the opening ceremony.

Bodh Gaya in northeastern India’s Bihar state is one of Buddhism’s four holiest sites. It is where Sakyamuni Buddha attained enlightenment under a Bodhi tree according to Buddhist texts.

The project to build a Korean-style temple in Bodh Gaya was launched in 2019 when two female Buddhists, Salmae and Yeonchui, donated 5 billion won ($3.9 million) to the cause. This was followed by the donation of a 6,600-square meter plot of land in Bodh Gaya worth 3 billion won by members of Tongdosa, one of the three largest Buddhist temples in Korea, located in Yangsan, South Gyeongsang Province.

The opening ceremony will take place on Saturday with some 150 Buddhist monks and practitioners led by Most Ven. Wonhaeng, the president of the Jogye Order. The delegation is also the largest group from Korea to complete a pilgrimage in India since the outbreak of COVID-19.

The completed temple will have a total floor area of 3,305 square meters. It will include a Buddha hall, meditation hall, guest quarters, and a health clinic for local residents.

Located about 200 meters from the Mahabodhi Pagoda, the temple will be named Bunhwangsa. “Bunhwang” refers to a beautiful lotus flower that stays untainted, despite blooming in mud. There is a temple with the same name in Gyeongju, North Gyeongsang Province, the ancient capital of the Silla Kingdom (57 BC – AD 935).

Bunhwangsa in Gyeongju was commissioned by Queen Seondeok (reign 632 - 647), as an act of fervent devotion to repulse foreign invaders and bring prosperity and peace to her kingdom. Similarly, the name Bunhwangsa for the temple in India was chosen by the principal donors for a special reason. It embodies the donors’ desire to overcome difficulties at home and abroad that Korea faces today, an official from the Jogye Order said.

Bunhwangsa in Bodh Gaya will serve as a refuge for Korean Buddhists and those seeking a spiritual awakening while on pilgrimage, the official added. Because of its status as a site of enlightenment, many major Buddhist traditions around the world are represented by a temple or monastery built in their own unique styles in Bodh Gaya. It has been a long cherished aspiration of Korean Buddhists to establish one in Bodh Gaya, the official said.

The temple is also part of the Jogye Order’s “One Million Vows Assembly” initiative, aimed at boosting its dwindling congregation amid decreases in both the general and Buddhist population in South Korea.