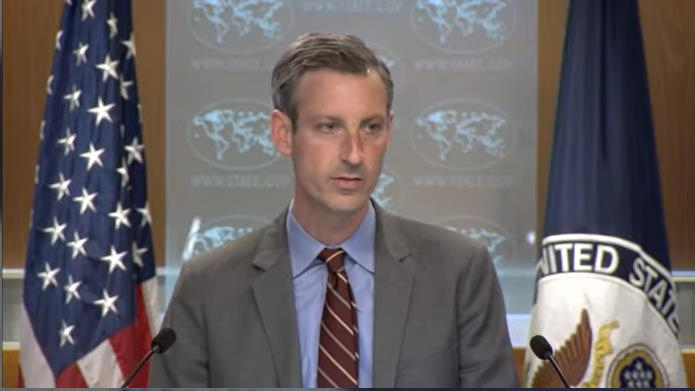 Ned Price, spokesperson for the U.S. Department of State, is seen answering questions in a daily press briefing in Washington on May 17, 2022 in this image captured from the department's website. (Yonhap)

The United States is deeply concerned about the COVID-19 outbreak in North Korea and supports providing humanitarian assistance, including COVID-19 vaccines, to the impoverished country, a state department spokesperson said Tuesday.

Ned Price, however, noted Pyongyang may still go ahead with its widely anticipated nuclear test.

"Unfortunately, to date the DPRK has refused all vaccine donations from COVAX," the department press secretary said when asked in a daily press briefing if the US would support the international vaccine-sharing program decided to provide vaccines to the North.

"I say it is unfortunate because we are deeply concerned about the apparent COVID outbreak within the DPRK, how it might affect the North Korean people, and the United States continues to support the provision of vaccines to the DPRK," added Price.

A state department spokesperson earlier told Yonhap that the US had no plans to share COVID-19 vaccines with North Korea from its own supplies but that it would support any effort by US and international groups to assist the North.

Price reiterated that the North Korean regime refuses to accept such assistance.

"As I said before, however, it is the DPRK that has consistently refused all vaccine donations," he said.

He also accused Pyongyang of neglecting the needs of its people.

"There's another great irony, or perhaps even a tragedy, in that even as the DPRK continues to refuse the donation of apparently much needed COVID vaccines, they continue to invest untold sums in ballistic missile and nuclear weapons programs that do nothing to alleviate the humanitarian plight of the North Korean people," said Price.

"The DPRK leadership continues to enrich themselves, to take care of their cronies while the people of the North, of the DPRK suffer, apparently now with the added burden, COVID," he added.

Pyongyang has staged 16 rounds of missile launches this year, including seven in January alone that marked the largest number of missile tests the country has conducted in any single month.

Price argued the North may also go ahead with its anticipated nuclear test.

"We have never seen the DPRK regime prioritize the humanitarian concerns of their own people over these destabilizing programs that pose a threat to peace and security in the Indo-Pacific and beyond. So I do not think there is any expectation of that," he said when asked about the possibility of North Korea postponing its nuclear test due to the new coronavirus outbreak.

The state department earlier said the North may be preparing to conduct a nuclear test as early as this month, which, if conducted, would mark the seven of its kind.