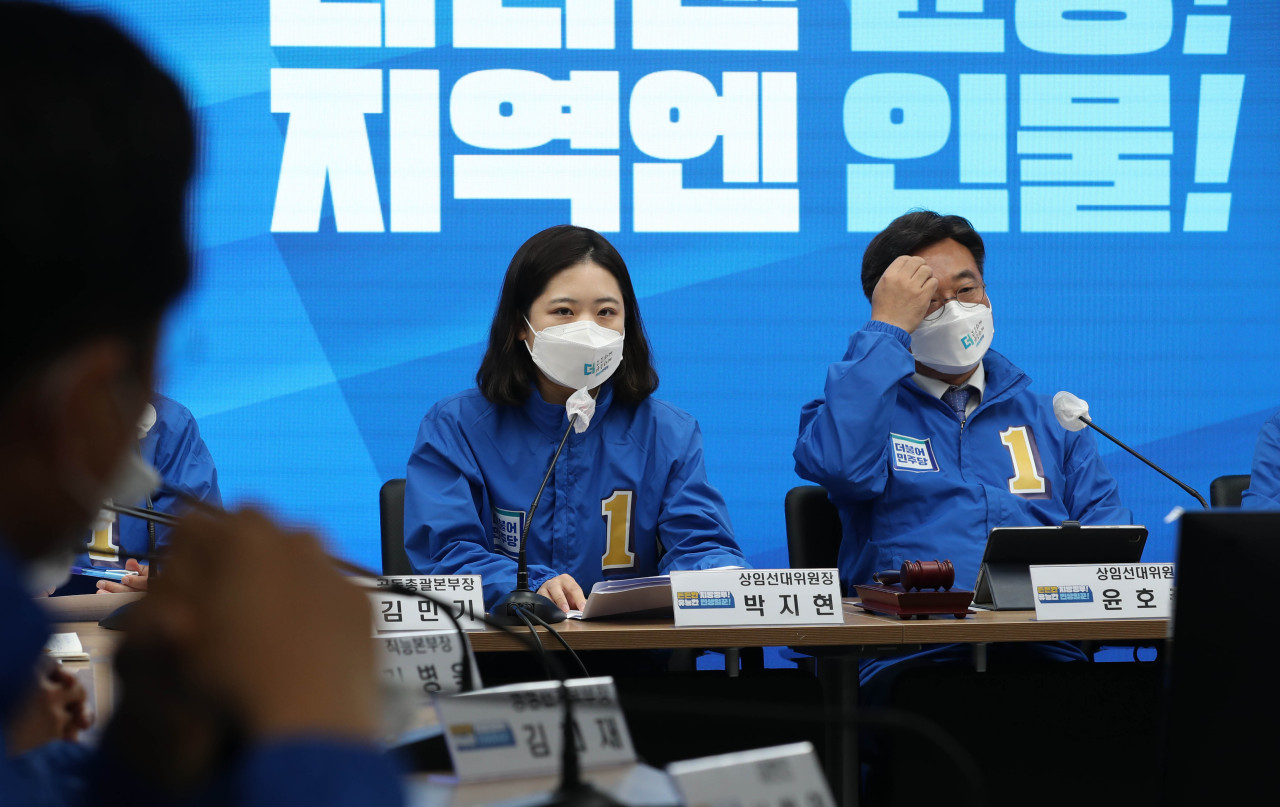 Park Ji-hyun, co-chair of the emergency steering committee for the Democratic Party of Korea, speaks during a central election campaign committee meeting held at the party’s headquarters in Yeouido, western Seoul, Monday. (Joint Press Corps)
South Korea’s main opposition Democratic Party of Korea is yet again dealing with a sexual harassment controversy as it readies for an important election in less than three weeks.

Legislators with the Democratic Party on Monday approved Rep. Park Wan-joo’s expulsion from the party over allegations that he sexually harassed a female staff member late last year. The party requested the National Assembly to penalize Park, which could cost him the lawmaker seat.

Park was reportedly under internal investigation from the party until recently after reports of sexual harassment were filed against him in April. The lawmaker has denied all allegations raised against him since the case first came to light.

Choe responded to accusations by saying that he was “merely joking.” However, claims that Choe had made inappropriate comments in the past were additionally reported. The party is preparing to find ways to penalize Choe for his misconduct, officials said.

The liberal party is also discussing penalizing Rep. Kim Won-I for allegations of inflicting secondary offense toward sexual assualt victims under his watch. A staff member was reportedly denounced for publicly revealing sexual assault against lower-level staff members in Kim’s office. Kim allegedly avoided the difficulties the staffer faced as a result of leaking the information.

The Democratic Party on Thursday started an investigation on Kim while firing the offenders in the sexual assault case.

The three cases altogether inflict a damaging blow to the Democratic Party in the face of the local elections, as the party is already tainted with an image of being a group of sexual predators from previous incidents.

Ahn Hee-jung, former governor of South Chungcheong Province, is serving a 3 1/2 year prison sentence for repeatedly raping his former aide while serving in the gubernatorial post.

The party apologized for sexual misconduct cases being repeated among its members, vowing to carry out investigations and penalize those involved irrespective of the upcoming local elections’ expected outcome.

“We have announced to have no tolerance on sex crimes and have tried our best to stop sexual misconduct within the party, but problems have occurred again,” said Park Ji-hyun, co-chair of the emergency steering committee for the Democratic Party, in a press briefing Thursday.

“We will carry out investigations and penalizations regardless of their impact on the local elections while actively pursuing improvements in the party’s bylaws and policies to put an end to hierarchy-stemmed sexual harassment,” Park said at the briefing.

The expected loss in public support could undermine the party’s nominees’ chances in the local elections. The Democratic Party is already behind the ruling People Power Party in many opinion surveys for many key mayoral and gubernatorial elections.

The recent series of sexual misconduct cases could drive the ratings for the liberal party even lower and bring crushing defeat, as some opinion surveys already reflected the change in public opinion from recent scandals.

The recent scandals are especially hurtful for the Democratic Party, as it emphasized gender equality and support for women’s rights as key themes in its political moves as a means to win the votes of young women and stay close to liberal-minded voters.

The People Power Party heavily denounced the liberal party for maintaining double standards, using the scandals as momentum to increase support for itself and aid the start of the Yoon Suk-yeol administration.

“People shunned the Democratic Party in the mayoral by-elections and the presidential election because it made insincere apologies, undermined victims’ rights and caused secondary offense by protecting their own,” Rep. Her Eun-A, a spokesperson for the People Power Party, said in a statement Sunday.

“The Democratic Party should reflect on whether it can really discuss women’s rights and call itself a feminist political party while violating women’s rights like just now,” Her stated.

The scandals could help Yoon successfully appoint some of his nominees, who are under fire from the Democratic Party. The Democratic Party is looking for ways to win back public trust and save its face in the local elections.

Some Democratic Party members have already called for their party to grant approval for Prime Minister nominee Han Duck-soo without any conditions. It’s a move that could help the Democratic Party appeal to voters, by showing it is ready to cooperate and work closely with the people.

“I believe we should give unconditional approval to appoint Prime Minister Han Duck-soo,” Rep. Jung Sung-ho of the Democratic Party said in a Facebook post Thursday.

“We should trust the people and let them decide on the outcome of nominating a prime minister and ministers that do not meet our standards,” Jung wrote.

The Democratic Party is expected to officially reach a conclusion on what to do with the confirmation procedures for Han and remaining ministerial nominees in a meeting within this week. Yet possibilities remain for the party to decide against approving Han’s appointment, as many of its legislators remain firmly opposed on the matter.