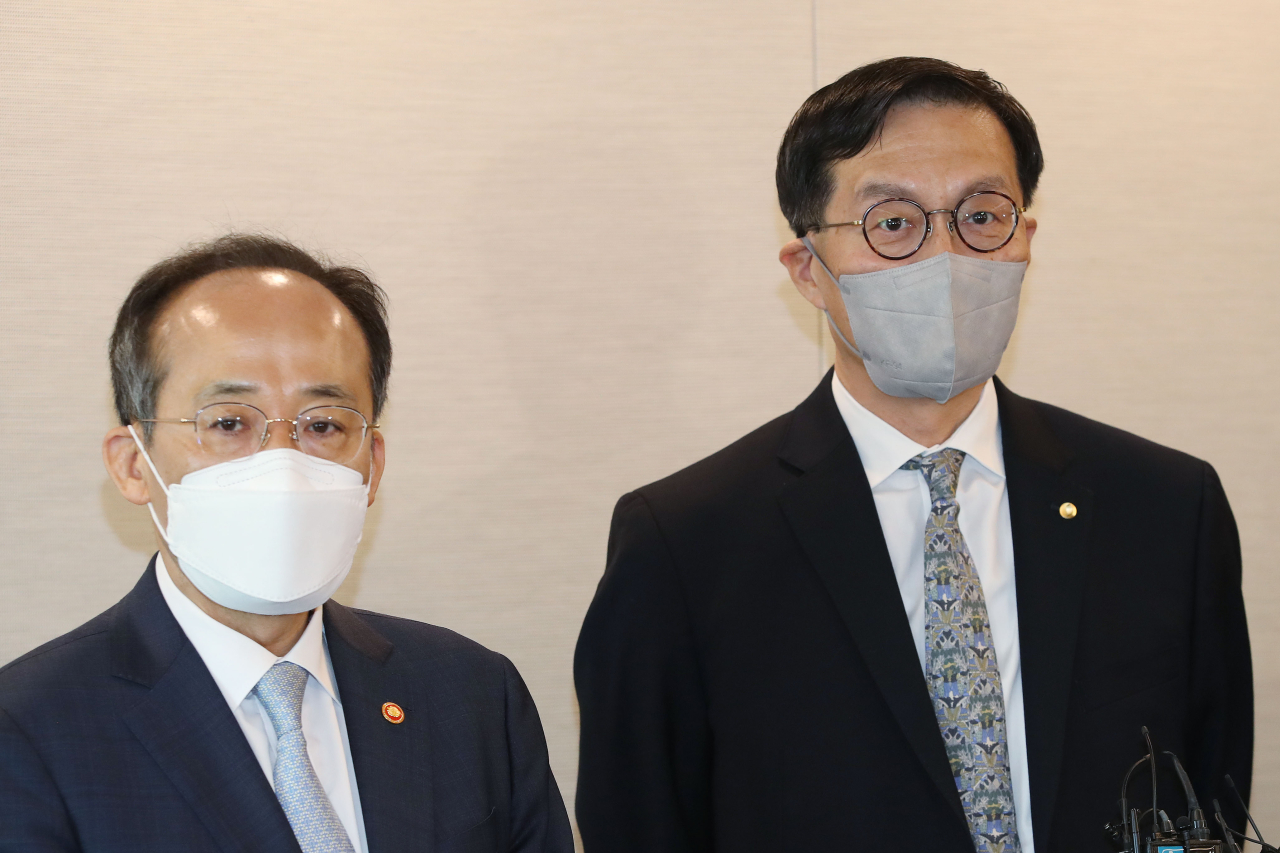 Finance Minister Choo Kyung-ho, left, and Bank of Korea Gov. Rhee Chang-yong pose for a photo at the Korea Press Center in central Seoul on Monday. (Yonhap)
South Korea has yet to arrive at a stage where the option of a “big step” or half a percentage point rate hike can be completely ruled out, with the possibility of higher inflationary pressure looming over the economy, the nation’s central bank chief said Monday.

Following his breakfast meeting with Finance Minister Choo Kyung-ho, Bank of Korea Gov. Rhee Chang-yong told reporters the uncertainties surrounding Korea’s inflation is keeping the central bank from taking the option of a 50-basis-point rate hike off the table.

“The economic situation as of April didn’t necessarily call for a big-step rate hike, but the BOK will make its decision based on a comprehensive review of data, including forecasts, from now on,” Rhee said.

Despite US Federal Reserve Chairman Jerome Powell’s recent remarks saying that the Fed isn’t considering raising the interest rate by 75 basis points, Rhee pointed to the uncertainties surrounding the existing data as a key reason to keep the half a percentage point rate hike as an option.

The Fed on May 4 raised its interest rate by half a percentage point -- the biggest rate hike in 22 years -- which followed a quarter-point hike in March. Markets project the rate-setting Federal Open Market Committee to hike another half-point in June and continue to raise benchmark rates through the end of the year.

“We will assess the situation at this month’s monetary policy meeting and look closely at the economic situation in July and August, alongside any changes in inflationary pressure,” he added. The BOK’s next rate-setting meeting is scheduled May 26.

However, a ranking BOK official who requested anonymity told reporters on Monday afternoon that Rhee’s comments merely mean that the central bank is considering all possibilities in steering the direction of its monetary policy. The official downplayed Rhee‘s comments and said that the BOK chief was just trying to highlight uncertainties surrounding inflation.

On concerns of a higher US interest rate to Korea’s base rate leading to an outflow of capital and weaker won, Rhee said that the inflationary pressure in the US has been higher than in South Korea, so the BOK must consider the country’s growth pace and inflation, rather than making policy moves solely based on the rate gap.

Rhee also downplayed the effects of the US Fed’s rate hikes on the Korean market, saying that more than two 50 basis point rate hikes are already reflected in the local market. With the US’ consumer price growth surpassing 8 percent in March, the rate hikes were “largely expected,” he explained.

In April, the BOK raised its base rate by a quarter-percentage point to 1.5 percent, marking the fourth rate hike since August last year, when it ended more than a year of a record low interest rate. The move was made in an effort to hit a brake on the nation’s snowballing household debt and curb inflation.

Regarding the issue of reviving the South Korea-US currency swap deal, Choo refused to comment on whether the topic will be discussed with Rhee ahead of Monday‘s meeting. A $60 billion currency swap deal between the BOK and the Fed was signed in March 2020 to combat risks stemming from the COVID-19 pandemic, and was extended three times before expiring on Dec. 31 last year.

The Korean won has been recently losing value against the US greenback, with the Fed’s rate hikes leading to a strong dollar trend. The won hit a 13-year low of 1,288.60 won against the dollar on Thursday.

The nation’s fiscal and monetary policy chiefs agreed to bring about stronger policy coordination and solid communication between the Ministry of Economy and Finance and the central bank to counter high inflation and the nation’s household debt issues.