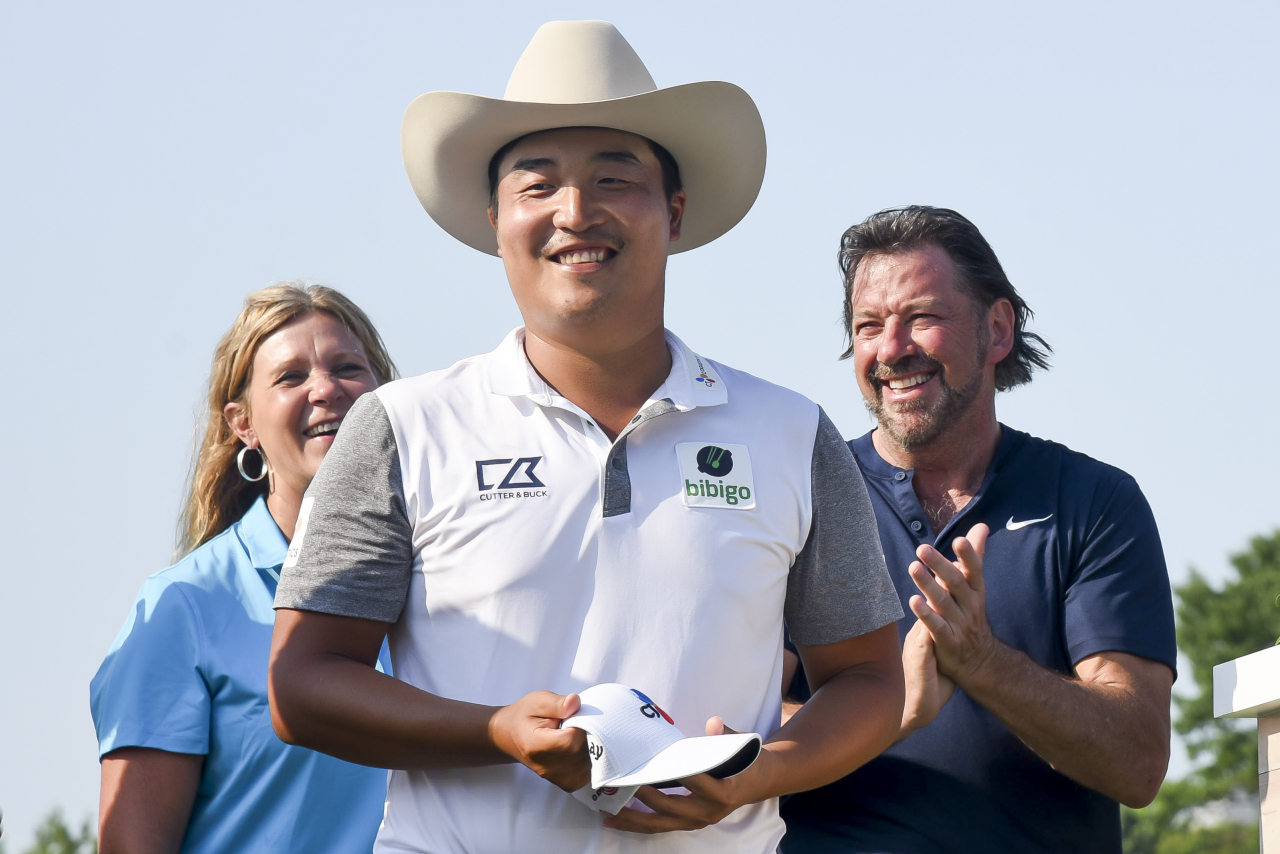 In this Associated Press photo, Lee Kyoung-hoon of South Korea celebrates in a cowboy hat after winning the AT&T Byron Nelson at TPC Craig Ranch in McKinney, Texas, on Sunday. (AP)

Almost exactly one year later, on Sunday, Lee defended his trophy at TPC Craig Ranch in McKinney, Texas. This time, Lee did so with the newest member of his family, the 10-month-old daughter Celine Yu-na, and also his mother and father on hand.

"It's an amazing feeling. It still feels like a dream," Lee, 30, said at his press conference after winning his second straight AT& Byron Nelson. Lee shot a bogey-free final round of nine-under 63 to win the 72-hole competition at 26-under 262, one ahead of former world No. 1 and Texas native, Jordan Spieth.

"I've been living with my parents for a few months now, and I hadn't played well in front of them until now," Lee added. "That was weighing on my mind. I am really happy to win this in front of the whole family here. I think we'll go to a Korean restaurant and have some beer and good meat (to celebrate)."

Lee's day featured seven birdies and an eagle at the par-five 12th. He is the first South Korean player to successfully defend a PGA Tour title.

Lee started the day four strokes off the lead but made an early statement by burying a 51-foot birdie putt on the second hole.

He scored four more birdies on the front nine and said the eagle at the par-five 12th was the turning point.

Lee's second shot with a 4-iron rolled to about four feet from the cup, and he calmly sank that putt to take the sole possession of the lead at 24-under.

"I had a good start with the long birdie putt at the second, and after making the eagle at No. 12, I thought maybe I'd have a chance to win," said Lee, who sprinted to his right immediately after the second shot on the 12th to see where the ball would land in the windy conditions. "That eagle gave me a lot of confidence."

Lee needed just 24 putts to get around his final 18 holes. Lee said he'd changed his putter last week, and added the new stick makes it easier for him to line up properly.

Lee also reunited with his former caddie, Dan Parratt, after the Masters, and brought his old swing and mental coaches back into the fold.

"I hadn't been playing well, and so I went back to my old instructors for advice," Lee said. "I switched caddies after the Masters in April for a fresh start."

The leaderboard coming into the final round was crowded with some big names: Spieth, a 13-time tour winner with three majors; Hideki Matsuyama, the 2021 Masters champion; and Justin Thomas, Lee's playing partner on Sunday with 14 tour titles. In the first two rounds, Lee played with Spieth and Scottie Scheffler, former and current world No. 1s.

"I was trailing some big names by a few shots, and I didn't expect myself to win," Lee admitted. "I was trying to learn from those guys. It's fun to compete with top-notch players, and that helps me play better, too. I was also hoping to create some positive momentum before the major championship next week."

Lee was referring to the PGA Championship, which tees off Thursday at Southern Hills Country Club in Tulsa, Oklahoma. Lee has yet to make a cut at a major in five appearances so far.

"Last year, I missed the cut at the PGA Championship. So my first goal next week is to play well, hopefully make the cut, and then also keep up the momentum," Lee said. "Hopefully, this season will be better than last year."

Lee didn't have any top-10 finish this season in 16 tournaments before AT&T Byron Nelson. He said he feels comfortable at TPC Craig Ranch, adding, "It's very welcoming here."

"It's an honor to be mentioned in the same breath as those names," Lee said. "Hopefully, people will remember my name." (Yonhap)