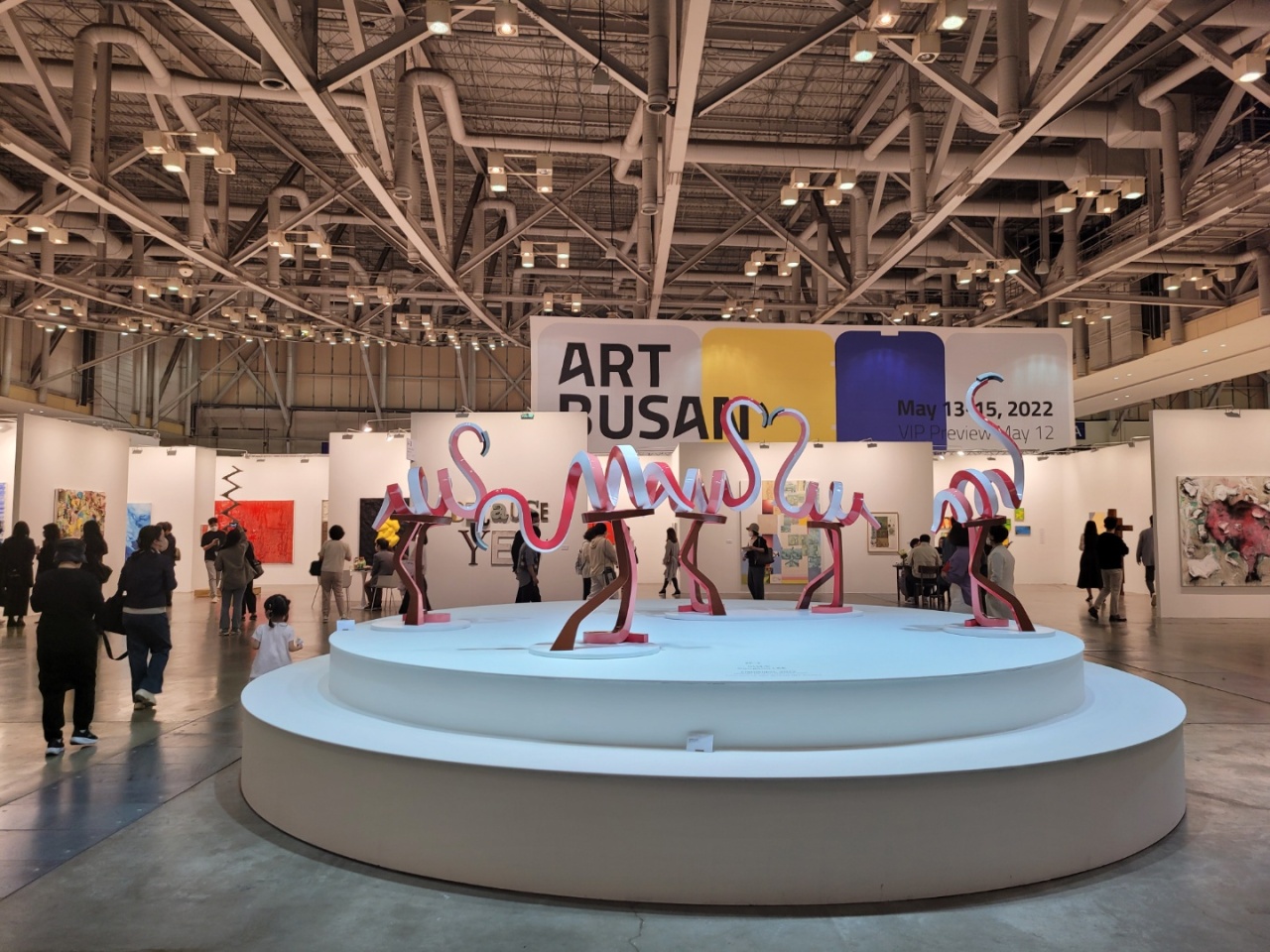 Art Busan 2022 runs until Sunday at Bexco Exhibition Center in Busan. The fair kicked off with a VIP-only day on Thursday. (Park Yuna/The Korea Herald)

BUSAN -- South Korea’s thriving art market has turned its focus to the southwest, as Art Busan 2022 held VIP opening sessions on Thursday and Friday, attracting people from across the country.

“It seems the collecting culture is maturing,” said an official from Gallery Hyundai. “I saw people hesitating before choosing works last year, but now it seems many collectors know what they want.”

At the entrance to the booth of the gallery -- which is one of the oldest art galleries in the country with 52-year history -- is “One Through Zero (The Ten Numbers)” by Robert Indiana, who is also famous for the iconic “LOVE” image. Artists whose works are on display at the booth include Lee Kun-yong, Kang Ik-joong and German painter Sabine Mortiz.

It is the 11th edition of the art fair, which has grown into the second largest annual art event. Sales hit a record high of 35 billion won last year, behind only Kiaf SEOUL, which reported sales of 65 billion won.

“We are expecting to break another record this year as more galleries joined the fair, also in terms of quality of works presented this year,” Chae Seung-min from Art Busan told The Korea Herald.

Among the works shown at the fair are “Abstraktes Bild” by German artist Gerhard Richter and “Tete d‘homme et nu assis” by Spanish artist Pablo Picasso, both with price tags of around 5 billion won.

American pop artist Roy Lichtenstein’s painting “Purple Range” did not make it to the fair. It had been expected to be the most expensive work at Art Busan 2022, but it sold before coming to the fair, according to Gray, a gallery based in Chicago and New York.

“We have sold many works already, but we are expecting many more visitors coming to the fair this weekend. Art Busan particularly sees visitors flocking over the weekend,” said Woo Chung-woo, director of the Hakgojae Gallery. The gallery has brought “Internet Dweller: mpbdcg.ten.sspv” to the fair, created by Paik Nam-june, Korean-born artist dubbed as the founder of media art.

Kukje Gallery, one of leading galleries in the country, has presented works by emerging or prestigious Korean artists such as Yoo Young-kook, Ha Chong-hyun, Park Jina and Yang Hae-gyu, which were sold quickly on the first day.

While art fairs have been a popular destination for fans to see celebrity art-lovers, not many have been seen or shared photos on social media this year.

“It seems some celebrities are holding off their appearance either at the fair or social media as it is right after the funeral of Kang Soo-youn. It was a huge thing to the film industry,” a gallerist who declined to be named, told The Korea Herald.

In 2021, South Korea’s art market was worth a record 922.3 billion won, based on transactions made at art fairs, auction markets and galleries’ sales, according to Korea Arts Management Service.

Joined by 133 galleries from 21 countries, the art fair will run through Sunday, closing at 6 p.m. at Bexco Exhibition Center in Busan.