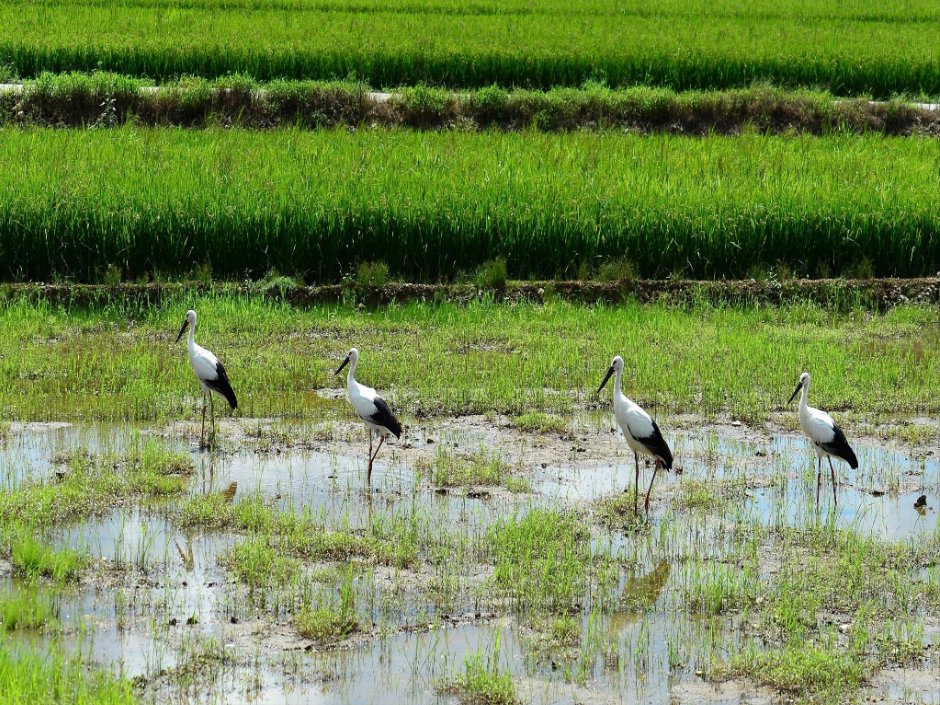 Four storks are seen in a field in Yesan, South Chungcheong Province, Sept. 3, 2021. (Stork Monitoring Database)
Oriental white storks are returning to Korea after more than four decades, with fourth-generation chicks being hatched in the wild.

This year, 12 pairs of oriental white storks are nesting in Korea this season and about 30 young storks have hatched including three fourth-generation chicks.

While they were once commonly found across Korea, the domestic population drastically dropped after the 1950-1953 Korean War. The birds faced extinction as industrialization starting in the mid 1960s destroyed their natural habitats.

In April 1971, the last couple was found nestling in North Chungcheong Province, but shortly after, the male stork was shot dead by a poacher. The species went extinct in 1994 when the bereaved female stork died in captivity.

Oriental storks, designated as Korea’s National Monument No. 199, are classified as an endangered species by the Ministry of Environment and the International Union for Conservation of Nature (IUCN). There are fewer than 3,000 oriental storks living worldwide. 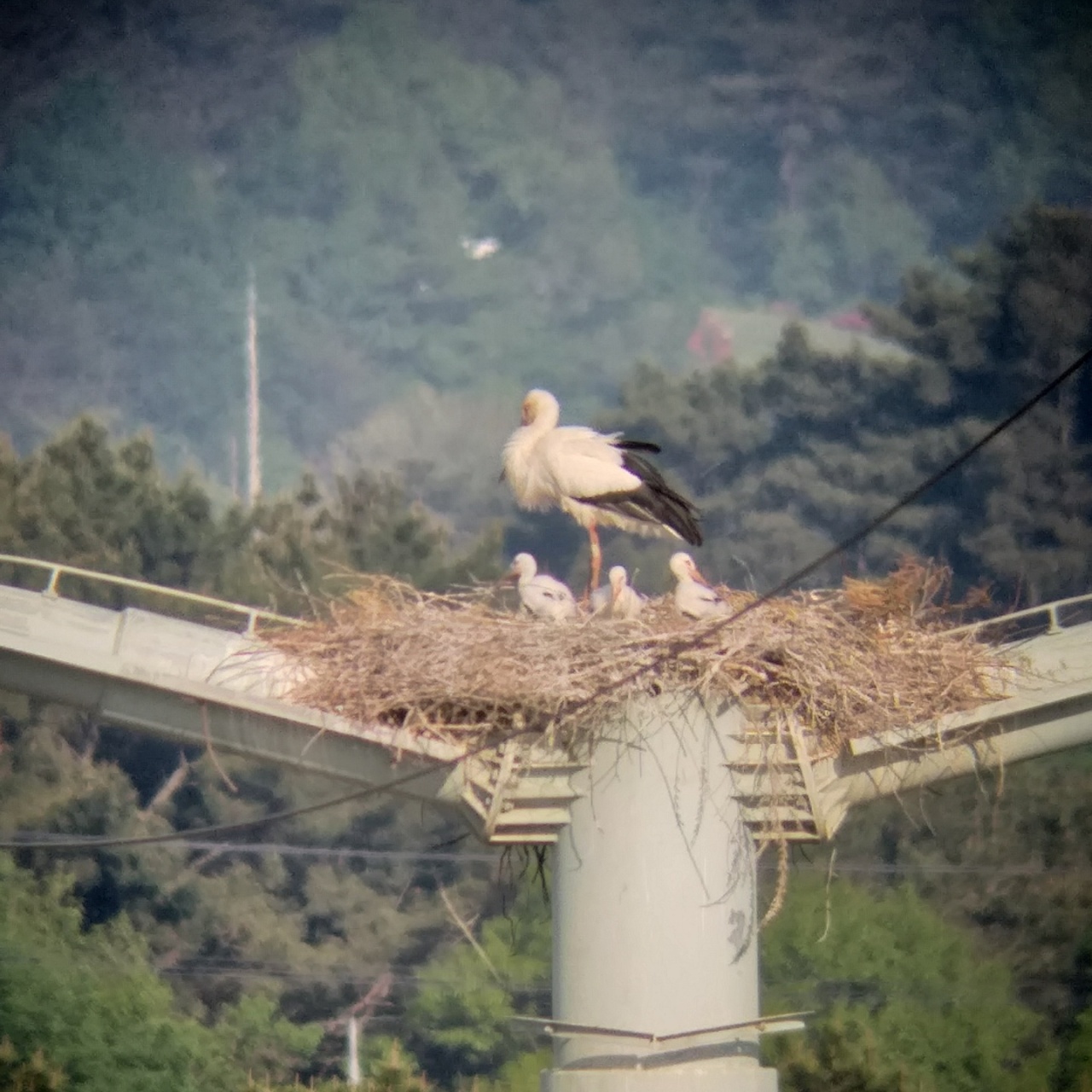 An adult stork and three newly hatched chicks stay in a nest on top of a transmission tower in Taean, South Chungcheong Province, May 10. (Yesan Stork Park)
In the past, storks -- called “hwang-sae” in Korean -- were common resident birds in the Korean Peninsula. People thought the storks were a symbol of wealth and longevity, bringing good luck and protecting villages.

An old proverb in Korean says: “If a crow-tit walks like a stork, it will break its legs.” It means if you overdo something, you will bring hardship on yourself.

Oriental storks are large-sized birds, with a body length of 110 to 150 centimeters. They used to be called “han-sae,” which literally means “big bird.”

They are relatively larger than European white storks and have a long pointed black beak rather than a red one.

Storks in Western folklore are also auspicious symbols. This symbolism was popularized in the 19th century through a Hans Christian Andersen story called “The Storks,” in which storks bring babies to new parents in a basket. 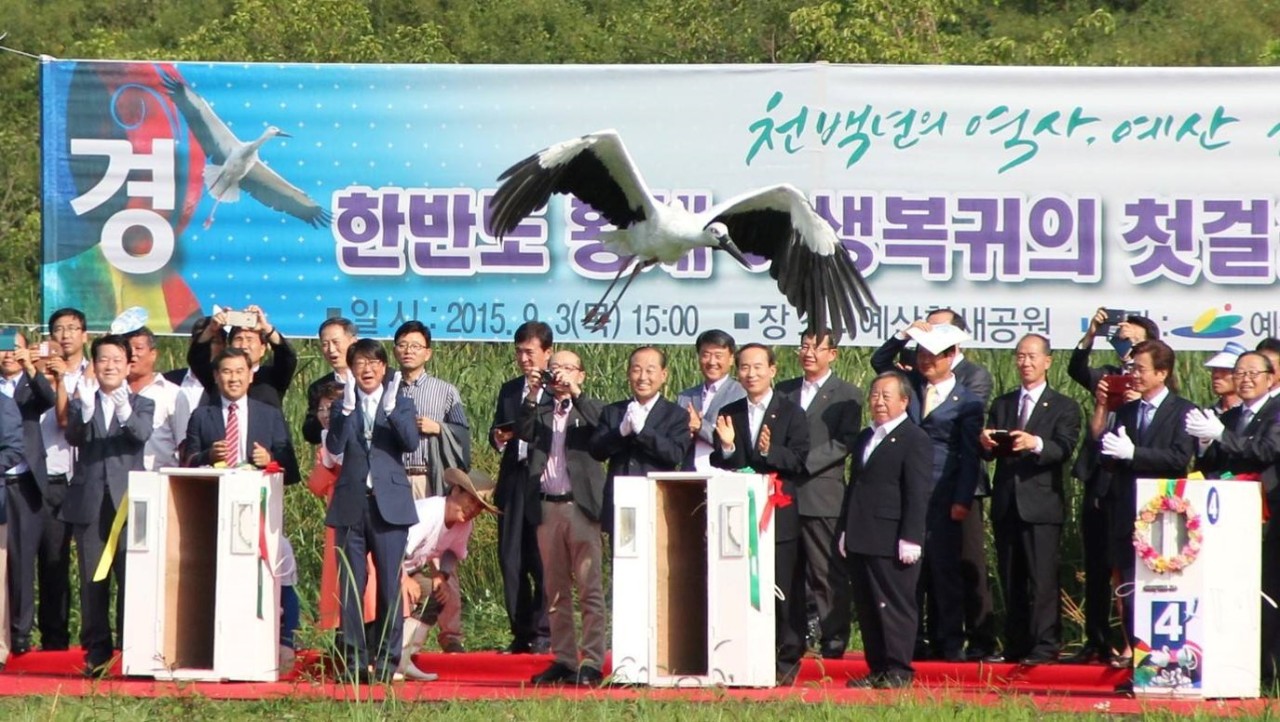 People clap and cheer as a released stork flies away into the wild at a releasing ceremony at the Yesan Stork Park, South Chungcheong Province, Sept. 3, 2015. (Yesan Stork Park)
Making its long-awaited return

In 1996, the Eco Institute for Oriental Stork, based in North Chungcheong Province, began a restoration project in an attempt to revive animals in the country. The center succeeded in breeding storks using imported species from Japan, Russia and Germany.

The first pack of storks – six adult storks and two young ones – was released into the wild in 2015.

For the past seven years, a research team at the Yesan Stork Park in South Chungcheong Province has released 155 storks, and about 58 percent of them have survived.

“We consider the survival rate as ‘satisfactory,’ because more than half of the released animals have survived. Usually the figure goes back and forth between 53 to 58 percent,” said Kim Su-kyung, a senior researcher at the reintroduction research team, to The Korea Herald.

She added that there is a steady increase in the number of young storks hatching in the wild. Nineteen were hatched in 2020, 25 in 2021, and 30 chicks in 2022. All twelve pairs have nested in South Chungcheong Province, according to the team.

“One of the reasons South Chungcheong Province, and Yesan in particular, was chosen as a restoration site is because there were previous records of storks breeding in this region. There is even a monument commemorating this place as the breeding site,” Kim said.

The region still has favorable conditions for storks to live and breed, such as vast farmland or rice fields that serve as wetland and mountains nearby that provide branches for their nests.

“The resident storks in Korea were familiar birds to our ancestors, as they had settled in none other than rice paddy fields. Sitting at the top of the food chain, the oriental stork is not only a carnivorous indicator that reflects the health of an entire ecosystem, but also a symbolic indicator that connects to our agricultural society,” explained the researcher.

Thus eco-friendly farming methods help storks adapt to their habitat by increasing the number of organisms that inhabit the rice field. Some farmers have dedicated paddies currently not used for rice production to create yearlong “flooded rice paddies.” 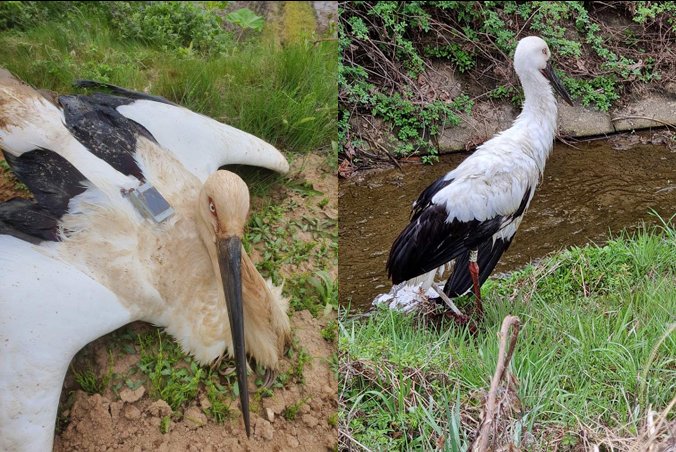 Although the restoration project is on track, a number of human activities still threaten storks from settling in the wild.

It was the very first stork which was released into the wild in 2015. The stork was named Dae-hwang after the first syllable of the official name of the Republic of Korea, “Daehanminguk.”

“There was no sign of skeletal problems, but the stork could not stand straight. It reacted when we prescribed an antidote, but unfortunately it did not survive,” said Kim Ri-hyun, a wild animal rehabilitator at the rescue center.

Dae-hwang leaves behind its partner and four chicks.

Another stork was sent to the rescue center after it was caught in a snare in April. The stork lost one leg and will not be able to return to the wild.

“It is impossible for any bird to survive without a leg, which is an important body part for walking, flying and hunting. The research center decided to take in the injured stork after the treatment,” she added. 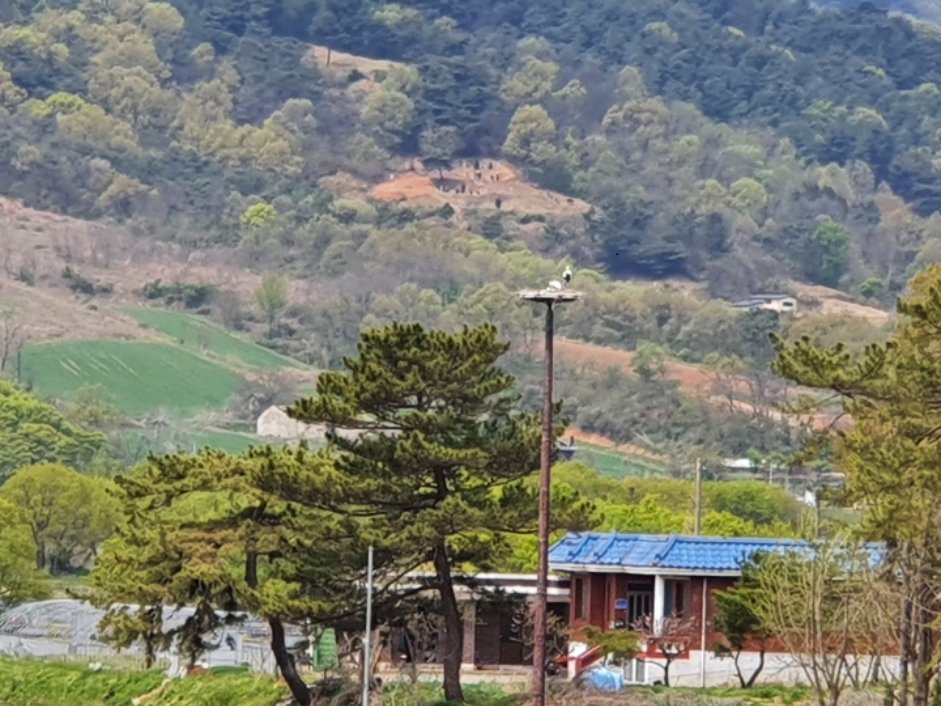 “The core value of the restoration project is to improve storks‘ habitats, and therefore revive the whole ecosystem where both humans and wildlife can flourish,” said Kim Su-kyung of the research center.

Recently, the center has installed supplementary devices around the rice field to save other living aquatic creatures. A “frog ladder,” for example, helps frogs and other organisms to jump up the paddies preventing certain deaths from roadside drains.

“Releasing storks is a simple task, I think. But what we ultimately seek is to restore the whole ecological system to the level where we can see abundant living organisms like in the old days. I hope our efforts to reintroduce the storks consequently enrich the biodiversity and revitalize eco-friendly agriculture as well,” Kim said.

Against this backdrop, Yesan, in cooperation with the Korea Rural Community Corporation is launching an eco-friendly complex project with 19.3 billion won ($14.9 million) for the next five years.

The goal is to promote a green agricultural society where storks and local farmers can coexist. Major business plans include: developing adequate wetlands for storks, installing green facilities, and building tourist trails around villages.

The number of farms which have received certification marks for environment-friendly agricultural products has been steadily decreasing in South Chungcheong Province.

They fell by more than half from 9,603 in 2011 to 4,311 in 2020, according to the National Agricultural Products Quality Management Service.

“The graying agricultural population is one reason for the downturn. Also the fact that there is not much difference in price between eco-friendly rice and chemically-sprayed rice discourages the farmers,” Kim explained.

“But what we want is a landscape with storks. We cannot continue on this restoration forever. I hope one day in the future, humans and storks can live in harmony just like other wild birds.”