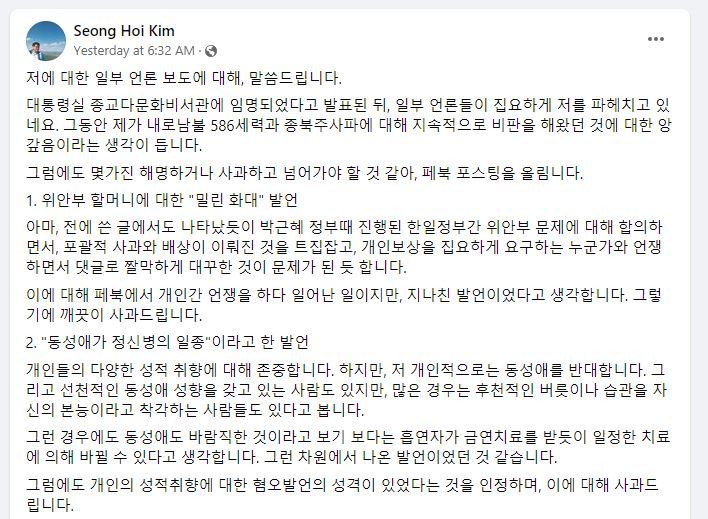 Screen capture of the Facebook post on Wednesday from Kim Seong-hoe, the newly appointed secretary for religion and multiculturalism for President Yoon Suk-yeol. (Screen Capture)
A secretary for recently inaugurated President Yoon Suk-yeol is under fire for his past comments on sexual slavery victims and sexual minorities, where he called homosexuality a “treatable” mental illness and labeled victims of sexual slavery under Japanese colonial rule as prostitutes.

Kim Seong-hoe, the presidential secretary for religion and multiculturalism for Yoon, said in a Facebook post Wednesday that he “sincerely” apologizes for some of the problematic comments he made in the past after his appointment was announced Friday last week.

“I sincerely apologize for the comments on sexual slavery and homosexuality in the past,” he said in the post. “I also express deep regret at how some media outlets have lost their balance and made inappropriate press reports.”

Kim said in a Facebook post in June 2019 that he does not endorse homosexuality and considers it as “a sort of mental illness.” He was banned from the social media platform for some time due to Facebook’s regulation on hate speech.

In the Wednesday post, he stood by his comment that he does not endorse or support homosexuality and that he still believes it could be cured from some forms of medical treatment like “how smokers receive cessation therapies.” He added that he respects diversity in sexual orientation.

“I respect the diversity in sexual orientation that individuals have, but I am personally against homosexuality,” he said in the Wednesday post.

“And while there are those with innate homosexual tendencies, I think in many cases people mistakenly think of it as basic instinct, even though they acquired it as a habit.”

Kim also apologized for essentially labeling victims of sexual slavery during the Japanese colonial rule as prostitutes in a Facebook comment written in September the same year, saying he has crossed the line in carrying out a verbal dispute over social media in the past.

“Are you saying that the government has to step up and collect the payment for sexual service in due?” Kim said then, arguing against an argument that denounced the Park Geun-hye administration on its compromise with Japan on compensation for the sexual slavery victims.

“Although this happened during a personal-level debate over Facebook, I do believe it crossed the line, so I sincerely apologize on this issue,” he wrote Wednesday.

Kim was found to have made hate speech against the sexual slavery victims in March 2021. He claimed that half of the women in the Joseon Dynasty were essentially sexual slaves, arguing Korea should recognize its history before raising criticism against Japan for its misdeeds during the colonial rule.

He defended his remarks in a Facebook post Thursday, saying that he should not be criticized for asking people to “reflect on (Korea’s) embarrassing history.”

While defending himself, Kim claimed that he is attacked for consistently raising criticisms against the “586 Generation and pro-North Korea forces.”

The 586 Generation refers to those born in the 1960s who rallied against dictator rule in the 1980s and who are now mostly in their 50s. The generation accounts for a large portion of the Democratic Party’s leadership and voter base. Kim’s comments show he is a loyal member of the conservative bloc.

Before being appointed as the presidential secretary, Kim had served as the head of the Center for Multicultural Korea, a local civic group made to support the lives of multicultural families in South Korea.

The presidential office said Thursday it will keep an eye on the situation for the time being, adding it has no particular response on problems concerning Kim.