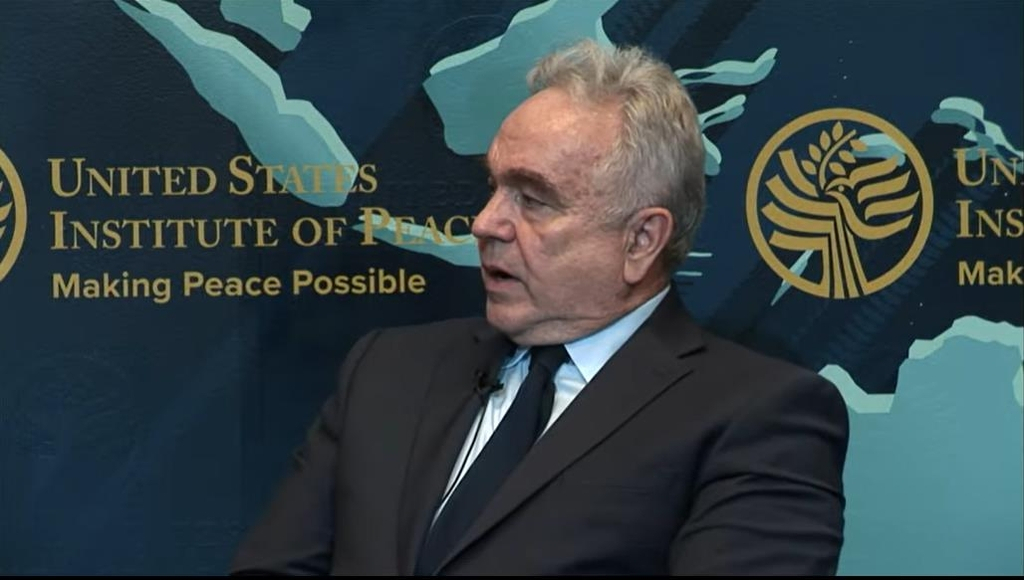 Kurt Campbell, deputy assistant to the president and National Security Council policy coordinator for the Indo-Pacific, is seen speaking in a seminar hosted by the US Institute of Peace in Washington on Wednesday in this image captured from the state-run think tank's website. (Think tank's website)

He also said the new South Korean government of Yoon Suk-yeol is determined to work closely with the US.

"I will also just note that we have a new partner, a new president in South Korea that is determined, working with the United States, to be very clearly engaged in deterring and sending a strong message of partnership between Seoul and Washington," Campbell said in a seminar hosted by the US Institute of Peace, a state-run think tank based in Washington.

"And on that basis, I think we are prepared for any kind of diplomacy or engagement with North Korea," he added.

The remarks come as US President Joe Biden is set to embark on a three-day trip to Seoul next Friday for a bilateral summit with Yoon, who took office on Tuesday (Seoul time). Biden is also scheduled to visit Tokyo following his trip to South Korea.

Campbell noted the US has tried to reach out to North Korea on "numerous occasions."

Pyongyang remains unresponsive to US overtures, multiple US officials have noted.

North Korea, instead, staged more than a dozen rounds of missile tests this year.

The US Department of State has said the North may be preparing to conduct a nuclear test as early as this month.

The UN Security Council was set to hold an emergency meeting later in the day in New York at a request from the US to discuss North Korea's recent missile launches that the US says included at least three intercontinental ballistic missile tests.

Campbell said trade will also be a major topic for discussion between Seoul and Washington during Biden's visit to South Korea.

"I believe that one of the things that is increasingly clear to at least our leadership in the United States is that when you talk about what are topics that countries will raise with us, economic and commercial issues are on the table, and we have to have good answers for that," he said when asked about possible topics of discussion between South Korea and the US

"They are important. They're critical for us to lay out what some of our political constraints are, but also what our ambitions for how we want to continue a strong engagement around standard-setting, technology, innovative commercial ties between us and the region (are)," he added. (Yonhap)