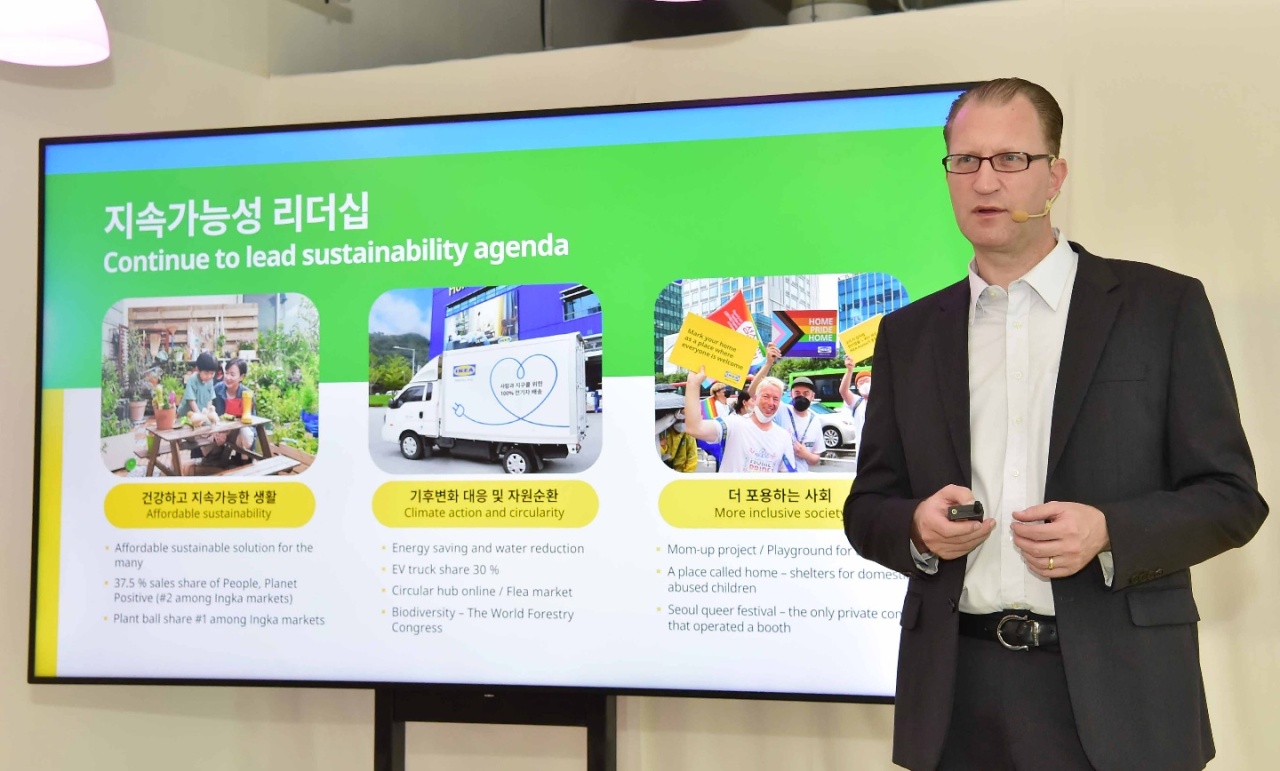 Fredrik Johansson, retail manager at Ikea Korea, speaks at a media conference held at Ikea Gwangmyeong in Gyeonggi Province on Wednesday. (Ikea Korea)
Ikea Korea saw its sales falling this fiscal year for the first time since its entry in 2014, the company said Wednesday, citing the lift of social regulations as a key reason for Koreans' reduced spending on home furnishing products.

During a media conference, the South Korean branch of the Swedish furniture giant said it had recorded sales of 618 billion won ($444 million) between September 2021 and August 2022, marking a 10 percent decrease from the previous fiscal year.

Ikea Korea has shown growth every year since its launch in Korea in 2014. In fiscal year 2021, its revenue had been its all-time highest, with 683.6 billion won in sales.

“This (decline in revenue) could be attributed to what South Koreans would refer to as revenge movement. People wanted to travel, and do things they have not been able to do for a long time,” said Fredrik Johansson, retail manager at Ikea Korea.

According to IKEA Korea, 66 million online and offline visitors had visited Ikea Korea in fiscal year 2022, showing a decrease of about 5 percent from 70 million a year prior.

“Another external factor that had a huge impact on our business is that there were very few housing transactions in South Korea,” added Johansson.

Based on the tally by the Ministry of Land, Infrastructure and Transport, the number of housing transactions in the first six months of this year marked 31,000, down 46 percent from the same period last year.

In response to the declines in revenues and customers, Ikea Korea said it will expand online customer services and promote diverse eco-friendly campaigns as a part of its business plan for fiscal year 2023.

The plans include upgrading its channels where customers can pay and consult on products through a chat system and online video calls.

“We aim to inspire our customers with new ways to furnish our homes, considering that the pandemic has changed our perception of our residences,” said Martina Seldel, commercial manager of Ikea Korea.

Ikea Korea further released its sustainability plans, which included increasing plant-based options in its food offerings by 42 percent and increasing the number of deliveries made by electric trucks by 60 percent during the fiscal year of 2023.

The company is also promoting "Sustainable Living Shops," which sells furniture designed to reduce one's climate footprint, along with "Circular hub," which facilitates the sales of preowned products to make a bigger contribution to a circular economy.