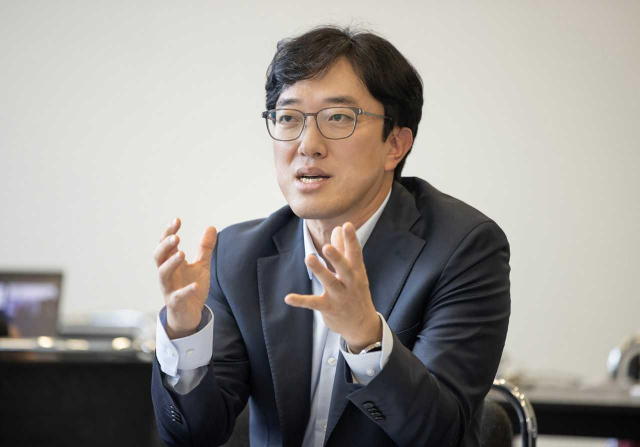 BERLIN – Samsung Electronics will focus on upgrading foldable phones and enhancing their user experience for now, despite their extensive study on diverse smartphone form factors such as rollable and slide types, according to a senior executive who oversees research and development for mobile devices.

“Technically, we are studying all form factors. But now our top priority is upgrading the current foldable phones,” Choi Won-joon, executive vice president and R＆D head of the mobile business division, told reporters at Samsung’s IFA exhibition hall on Friday.

“Something new or something different is not enough. What’s more important is offering new value for users. We will be able to introduce new products only when we have confidence in the value."

Having taken a cue from demand for larger screen phones like its Galaxy Note, Samsung launched the Galaxy Z Fold, the industry’s first foldable smartphone, back in 2019. Since then, the Fold and its Flip variant have seen steady growth in sales.

This year, the world’s largest smartphone maker showed confidence in exceeding the 10 million mark in sales for the latest Z Fold 4 and Z Flip 4, speeding up the mass market adoption of the new smartphone segment.

In the longer term, Samsung predicts the market for foldable phones to surge to 75 million unit sales by 2025, when foldable types make up almost half of its new premium phone sales.

Over eight years of hard work, Choi said his team had to tackle unprecedented challenges like bolstering the durability of the foldable screen and making the phone waterproof despite the connecting hinge of the dual screens, on top of reducing its weight while enlarging screen size.

He stressed that they are still balancing tradeoffs in upgrading the phones, and one of the latest challenges is adding a stylus pen.

From the Z Fold 3 that was launched last year, users can use Samsung’s S Pen on the larger unfolded screen. But many users are asking for a stylus storage slot, while others complain the phone is too heavy at the same time.

“It is a process of constant tradeoffs to find an optimal solution,” Choi said, adding that though they tried to come up with a slimmer pen, it hurt the natural writing experience.

“In the end, it is a strategic decision rather than an issue of technology. We are still deliberating over the true competitiveness of foldable phones.”

Adding to making the phones lighter and slimmer, Choi said creating a new software ecosystem exclusively designed for foldable phones is a key challenge to bolster the mass appeal of the still-new devices.

Samsung said the latest foldable phones, released last month, have seen their first-week sales more than double compared to the previous models, possibly due to upgraded features like a longer battery life and a larger screen.