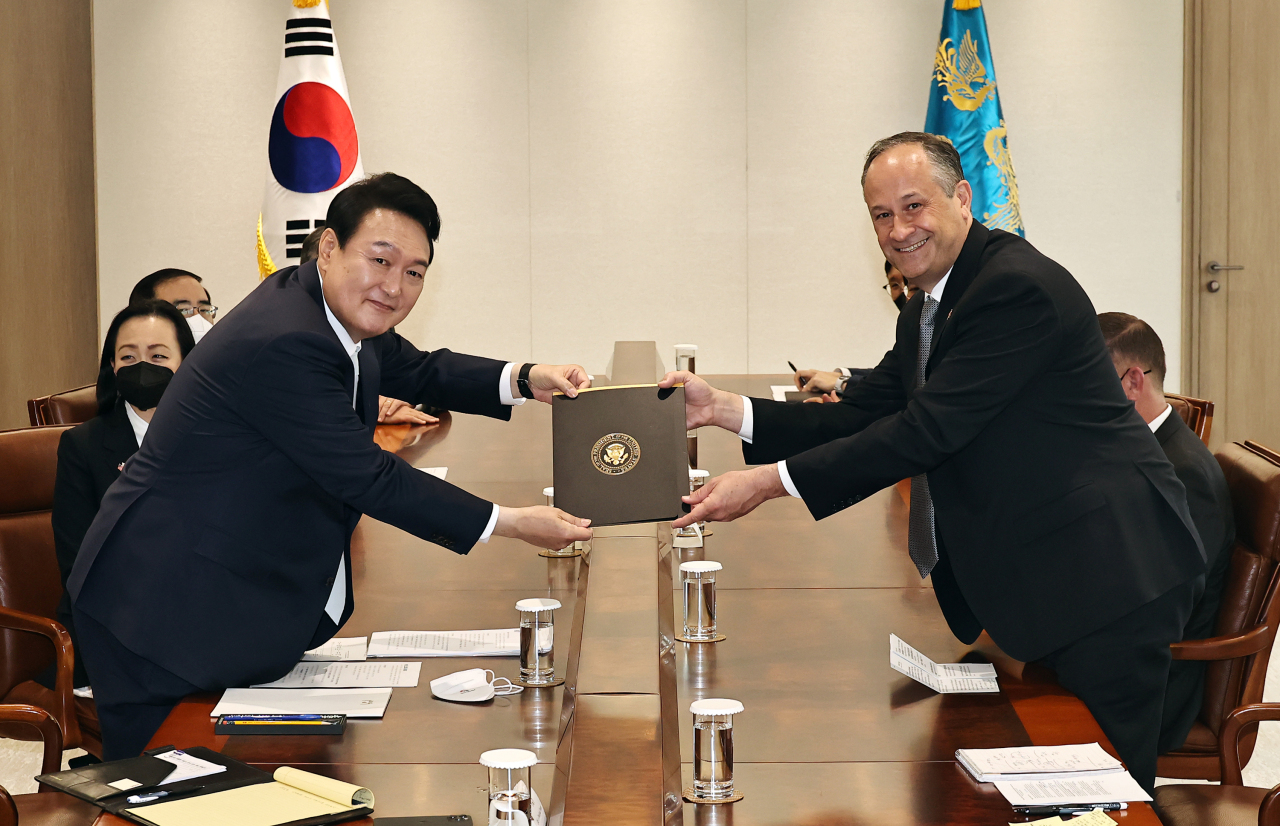 South Korean President Yoon Suk-yeol receives a personal letter from US President Joe Biden that was delivered by US second gentleman Douglas Emhoff at the new presidential office in Yongsan-gu, Seoul, Tuesday. Emhoff, who led a special delegation to South Korea, also joined the presidential inauguration ceremony held at the National Assembly earlier in the morning. (Yonhap)
President Yoon Suk-yeol on Tuesday made his diplomatic debut following his inauguration ceremony, holding a summit meeting and greeting delegates from key neighbors.

Following the ceremony, Yoon met with Emhoff and other members of the delegation from the US, which included Secretary of Labor Martin Walsh, Reps. Ami Bera and Marilyn Strickland, as well as Lee Min-jin, the author of ”Pachinko.“

Upon meeting Yoon, Emhoff said he was honored to become the first diplomatic guest at the new presidential house in Yongsan-gu. He also made note of the opening ceremony of the previous Cheong Wa Dae presidential compound, which was shown during the inauguration ceremony.

Emhoff then delivered a congratulatory letter from Biden to Yoon, which spoke of Biden’s will to work closely with Yoon for the next five years, according to the US second gentleman.

Emhoff said he, as a representative of the Biden-Harris administration, also hopes that the two administrations could build a mutual vision for a stronger alliance.

Yoon said the strong alliance between the two countries has helped South Korea prosper and he expects the alliance will continue to flourish.

The meeting served as a prelude to US President Joe Biden’s trip to South Korea between May 20-22, during which the first Yoon-Biden summit will be held.

Right after the meeting with Emhoff, Yoon met with Japan’s Foreign Minister Yoshimasa Hayashi. It’s the first time that a Japanese foreign minister has come to Seoul since Taro Kono’s visit in June 2018.

Hayashi too delivered a congratulatory letter from Prime Minister Fumio Kishida before a closed meeting that started at around 2:10 p.m.

Yoon welcomed Hayashi, saying that he “looks forward to working with Hayashi in the future to improve the relationship between the two countries” and that he expects to see Kishida soon.

Some suggested the meeting between Yoon and Hayashi meant that the two countries would take more actions down the road to revive their relationship, at least more than their predecessors did during the previous administration.

Upon sending the special envoy, Kishida too expressed his hope for a recovery of diplomatic relations, stressing the importance of cooperation between Seoul and Tokyo as well as the existing trilateral alliance involving Washington.

Kishida reportedly noted on Monday that “difficult challenges exist between South Korea and Japan, but (we) can’t leave (the bilateral relationship) as it is.”

On Tuesday, Japanese Chief Cabinet Secretary Hirokazu Matsuno also noted that healthy South Korea-Japan relations were required to secure peace, stability and prosperity in the region and beyond.

After the meeting with Hayashi, Yoon met with delegates from the UAE, which included Khaldoon Khalifa al-Mubarak, chairman of the Executive Affairs Authority of Abu Dhabi.

During the meeting, Mubarak said Sheikh Mohammed bin Zayed al-Nahyan, Abu Dhabi’s crown prince and de facto ruler of the Emirates, also hoped to meet Yoon in the near future. Mubarak also extended an invitation from UAE President Sheikh Khalifa bin Zayed al-Nahyan to the Middle Eastern country. Should Yoon travel to the UAE, he will become the first South Korean president to do so.

The meeting that came next was with Chinese Vice President Wang Qishan, who is widely known as one of the closest aides to Chinese President Xi Jinping.

Wang’s trip is also seen as the Chinese government’s decision to counter Seoul-Washington relations in the region.

Ambassador Jang Ha-sung also previously mentioned that the Chinese government’s decision to send Wang -- whose authority is higher than that of the usual envoys sent to presidential inaugurations in South Korea -- signals China’s efforts to strengthen ties with South Korea.

On Tuesday, Yoon wrapped up his diplomatic debut with his first bilateral summit with Singaporean President Yacob at the Shilla Hotel.