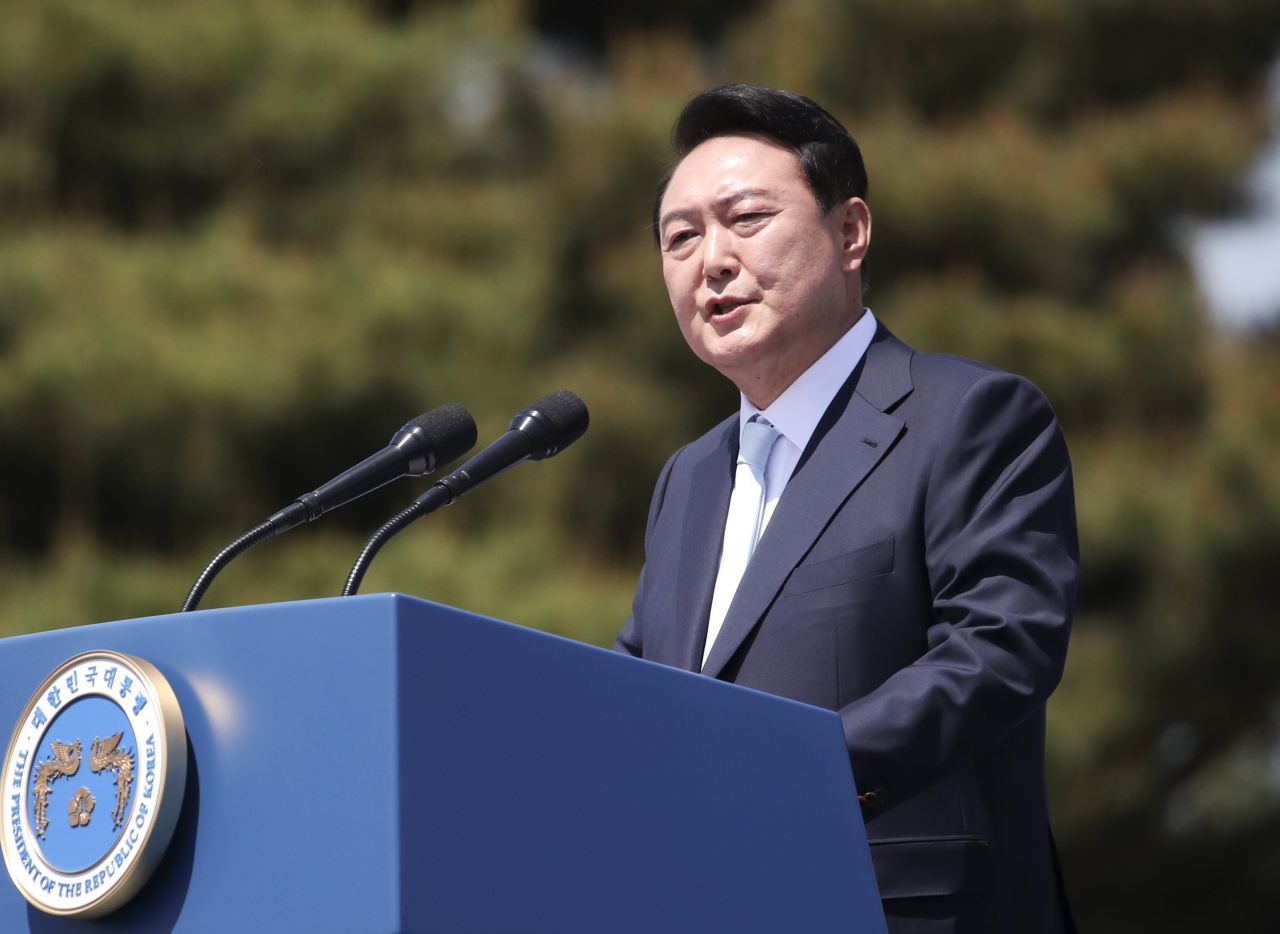 South Korea`s new President Yoon Suk-yeol (Yonhap)
Yoon Suk-yeol was officially sworn in as the 20th president of South Korea on Tuesday, kicking off his five-year term with the inauguration ceremony at 11 a.m. at the National Assembly in the nation’s capital.

He has some distinct features that make him a unique leader in a number of ways. Here are five facts about the country’s new leader.


Yoon’s presidency has brought about a noticeable change to South Korea already -- It is starting at a new location.

Cheong Wa Dae has been used as a working and living quarters of the president since South Korean government was established in 1948. It is where Yoon’s predecessor Moon Jae-in worked and stayed until just the previous day.

The only time it was not used as the permanent home and office of the South Korean president was during the 1950-53 Korean War, when then-President Syngman Rhee’s administration was driven out of Seoul by North Korean military, and was forced to set up office in the provisional capital of Busan.

Yoon will be commuting from his private home in southern Seoul to the new office every morning, while his choice of the new presidential residence -– formerly the official residence of the foreign minister –- undergoes renovations.


South Korean presidency has been held by lawmakers, military generals and lawyers, but Yoon is the first former state prosecutor to become the nation’s leader.

After passing the national law exam in 1991, he started the prosecutor career in Daegu in 1994 and stayed with the prosecution for 27 years.

When he left the organization in March 2021, he did so as the prosecutor general. He joined politics soon afterwards, registering himself as a presidential candidate for the People Power Party.

He is the first South Korean since the 1980s to have held exactly one job before becoming the president.


Yoon has four dogs and three cats, owning more pets than any other of his predecessors.

It is not hard to find animal lovers among South Korean presidents of the past: just look at Yoon‘s predecessor Moon Jae-in, who brought two dogs and a cat to Cheong Wa Dae when he began his term. In fact, a small controversy occurred a few months ago about the two Pungsan dogs gifted to Moon by North Korean leader Kim Jong-un. Technically any gifted a president receives on the line of the job belongs to the state, but Yoon suggested that the outgoing Moon should keep the dogs after retirement.

But what stands about Yoon is that he belongs to a much smaller group of presidents with no children. The only other childless South Korean president was Park Geun-hye, who was also the only female and only unmarried person among the country’s leaders.


While Seoul National University has been an indisputably the most prestigious higher education institute in the country, Yoon is only the second SNU graduate to be elected the nation’s leader. The only other SNU graduate Kim Young-sam majored in philosophy, making Yoon the first graduate of the famed SNU School of Law to ever become the president.

Yoon is the only one of South Korean leaders to have been born in the nation’s capital Seoul. As of now, Gyeongsang region has supplied the most presidents, with the leaders elected from 2002 to 2017 all being from Gyeongsang Provinces -- Lee Myung-bak was born in Osaka, Japan but he is widely considered to be from the Southeast, as his family relocated to Pohang, North Gyeongsang Province, shortly after his birth.

Born in 1960, he is also the first president to be born after the Korean War.


The 20th presidential election was the only one in history in which the winner was decided by a margin of less than 1 percent. A meager 0.73 percent -- 247,077 votes -- separated him and the runner-up Lee Jae-myung.

This was due to the two candidates getting 95.5 percent of the total votes cast. So while Yoon won by the smallest margin, he also secured the most votes of any presidential candidate in history, getting 16,394,815.

Yoon and Lee got so many votes that, despite losing, Lee attracted more votes than any previous winner of apresidential election.