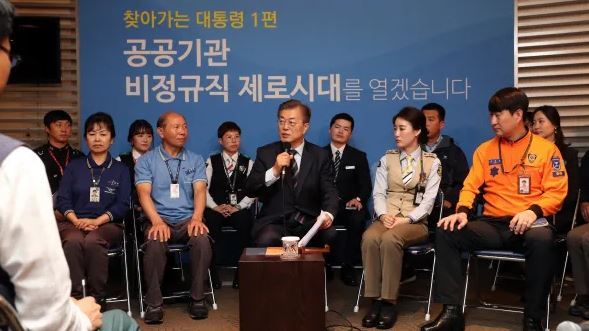 President Moon Jae-in speaks during his meeting with workers of the Incheon International Airport Corp. on May 12, 2017. (Cheong Wa Dae Press Corps)
SEJONG -- More than 100,000 temporary jobs in the public sector have been converted into regular jobs during the Moon Jae-in administration, whose term expires Monday midnight, state data showed.

According to Alio, a system for publicizing management information of 370 public agencies, 101,720 nonregular jobs were converted into regular jobs between May 2017 and May 2022. The outgoing president had pledged to have “zero irregular jobs” in state-funded agencies.

The new permanent positions accounted for some 24.5 percent of the total payroll in the public sector.

The number of temporary workers rehired as regular workers by each agency was subject to a government evaluation of their performance.

Including the list above, the number of agencies, which saw 1,000 or more conversions over the past five years came to 18. In contrast, 25 of the 370 agencies did not convert even one temporary position.

Moon’s zero temporary job policy instigated conflict between labor and management, and among employees who were hired as regular workers at the public agencies in the first place after a series of hiring processes and exams.

Some jobseekers have raised the issue of fairness in the hiring process in the public sector.