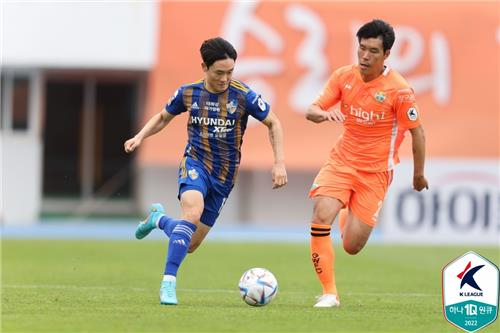 Um Won-sang of Ulsan Hyundai FC (L) tries to dribble past Kim Young-bin of Gangwon FC during the clubs' K League 1 match at Gangneung Stadium in Gangneung, 240 kilometers east of Seoul, on Sunday, in this photo provided by the Korea Professional Football League. (KPFL)

With less than a third of the K League 1 season in the books, it may be too early to say Ulsan Hyundai FC will run away with the title and everyone else will be playing for second place.

It just seems that way, though. Ulsan bounced back from their first loss of the season Thursday by beating Gangwon FC 3-1 on Sunday. At 26 points, they have opened up a seven-point cushion on three clubs directly below them.

Pohang, Jeju and Incheon all have 19 points, but Pohang lead the trio in the first tiebreaking category, goals scored, with 14. Jeju have netted 13 and Incheon have scored 12 so far.

Jeonbuk, the five-time defending champions, have joined the aforementioned trio to form a crowded middle class. The victory over Incheon gave Jeonbuk 18 points and extended their undefeated run to six games.

Gimcheon sit three points back of Jeonbuk to round out the top six.

Ulsan lead Pohang by seven points. And that's the same number of points that separate Pohang and eighth-place Daegu FC. Pohang cannot catch Ulsan but can fall to as low as fifth place this weekend.

There were some noteworthy individual performances Sunday.

Jeju United striker Joo Min-kyu, the reigning scoring champion, threw his hat into the ring for this year's Golden Boot by scoring a hat trick against Gimcheon Sangmu FC. It was the first hat trick by any player in this K League 1 season.

Joo now has six goals to trail co-leaders, Stefan Mugosa of Incheon and Cho Gue-sung of Gimcheon Sangmu, by two. Neither Mugosa nor Cho found the back of the net Sunday.

In Ulsan's victory, speedy midfielder Um Won-sang was involved in all three of the team's goals, despite coming off the bench in the 25th minute.

Um assisted on Leonardo's goal in the 27th minute. Seven minutes later, Um scored one for himself by converting a feed from Seol Young-woo. Um then collected his second assist at the end of the first half, with Leonardo once again as the beneficiary.

Daegu FC snapped their five-match winless skid as Cesinha and Zeca each had a goal and an assist in a 3-0 win over Suwon Samsung Bluewings.

The convincing win at DGB Daegu Bank Park in Daegu, 300 kilometers southeast of Seoul, foiled the homecoming for Suwon head coach Lee Byung-geun, who had been at Daegu's helm the past couple of years.

Lee has been brought in as a potential savior for Suwon during what is shaping up to be a lost season. At 10 points, they sit second-to-last in the 12-team league, ahead only of Seongnam with five points.

They won their first match on Lee's watch Thursday to halt their seven-match winless slide but couldn't build on that victory three days later. (Yonhap)