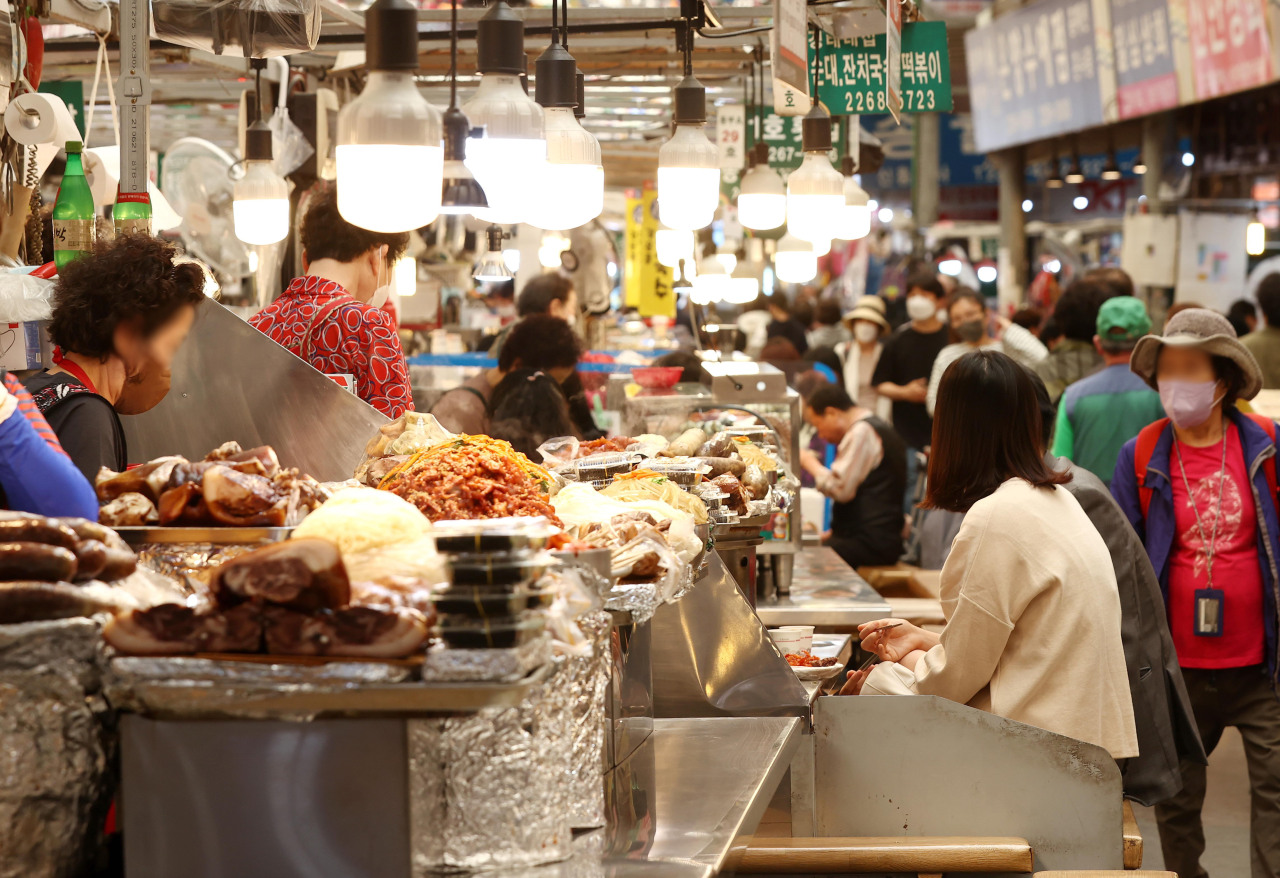 Small shops selling snacks and food are seen at Gwangjang market in Seoul in this April 28 photo. (Yonhap)
The incoming Yoon Suk-yeol government is set to reveal an extra budget later this week as the president-elect had promised to support the self-employed and small businesses that COVID-19 hit the hardest. Yoon takes office Tuesday.

“The budget will be rolled out at the earliest day possible once the new government takes over,” said Choo Kyung-ho, Yoon’s finance minister nominee who will double as deputy prime minister.

The Yoon government is expected to use at least 33 trillion won ($25 billion) for the pandemic relief. That would follow a 16 trillion-won supplementary budget that the National Assembly approved in February as the Moon Jae-in government’s last round of pandemic aid.

But Yoon’s pandemic relief package, worth at least 33 trillion won, could far exceed the previous Moon government’s cumulative 35 trillion won in relief given out over the last two years, as the Yoon government could be forced to back another extra relief budget.

Critics have raised concerns over whether Asia’s fourth-largest economy is serious about taming runaway inflation at home and averting debt risks.

Consumer prices jumped 4.8 percent on-year in April, the highest gain in 13 years since October 2008. The government debt is forecast to reach 1,075 trillion won this year, marking the first time to surpass the 1,000 trillion-won mark as the level has shown no signs of easing down since 2017, when Moon took over.

The debt-to-GDP ratio is expected to reach a record high of 50.1 percent this year while the fiscal deficit is likely to grow to 70.8 trillion won, about 3.3 percent of the GDP.

“The rising debt level is alarming. This affects us all so we have to think about the impact the one-off COVID payouts would leave behind,” said Sung Tae-yoon, an economics professor at Yonsei University.

The cash aid runs against the Bank of Korea’s plan to potentially raise its benchmark rate at least three more times starting as early as May to bring down inflation.

BOK Gov. Rhee Chang-yong has highlighted “normalizing” the loose monetary policy the Korea government has long left untouched since the pandemic. The former IMF economist referred to rising fuel costs globally, which were to blame for soaring living costs here.

Despite the worries, Yoon’s office reiterated that COVID-hit businesses receiving pandemic relief this week would be “fully compensated” for the pandemic damage. Those businesses have long complained that the government aid has so far been inadequate because only a fraction of the damage done was compensated for.

The Yoon government is also planning to extend such support to those who are “overlooked” in getting the government aid. Taxi and bus drivers, for example, are one of the groups that has not seen the same level of support they are entitled to, Yoon’s office said, adding cash payouts would be made to them.

Meanwhile, low-income households would be offered coupons to help them cut down on their living costs, Yoon’s office added, saying extra money made by postponing all noncritical government spending would be used. The office has said little on what it intends to do about inflation and rising debt levels.