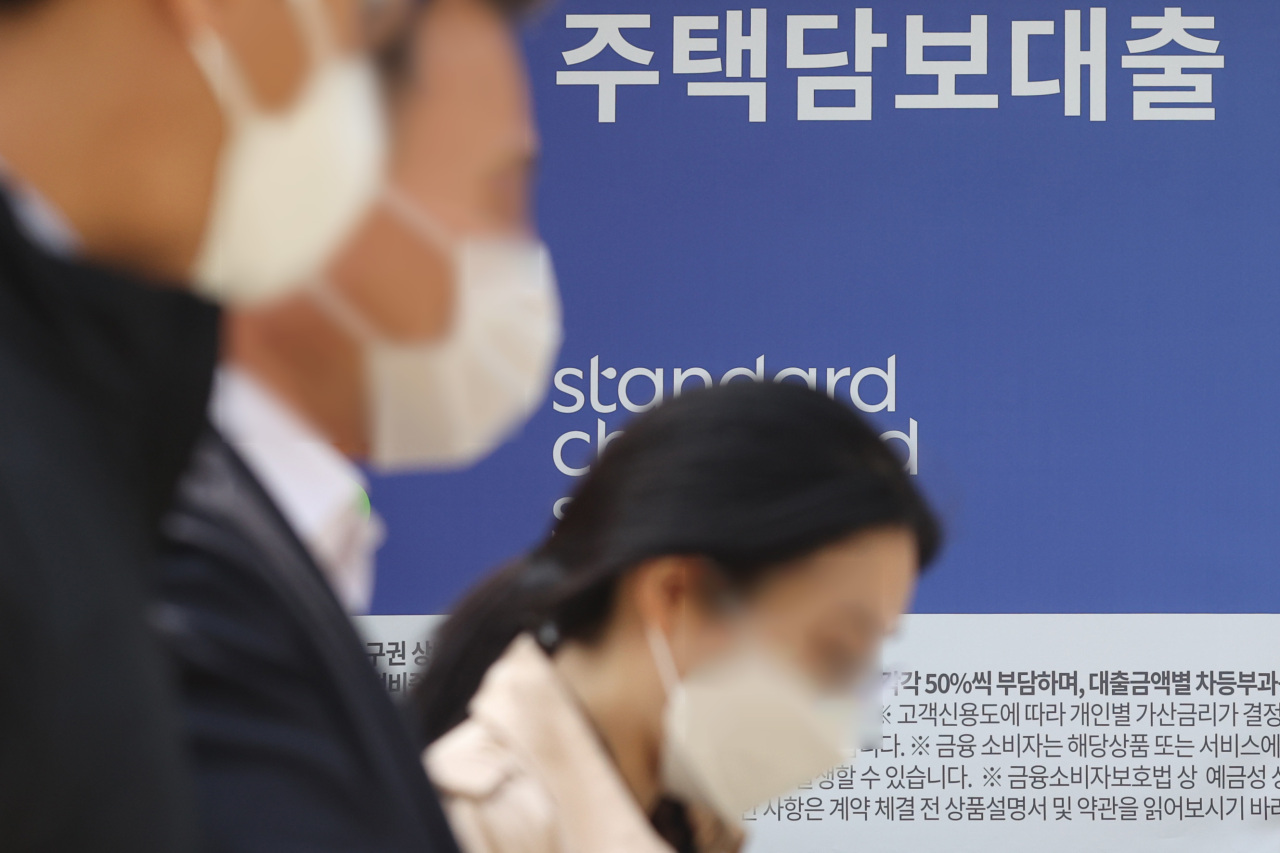 A promotion pamphlet for mortgage products is seen at a commercial bank branch in Seoul on April 18. (Yonhap)
SEJONG -- South Korea saw the ratio of collective debt -- held by the government, household and corporate sector -- to its gross domestic product climb sharply over the past few years since 2017, and even during the pandemic.

Further, the nation’s collective debt-to-GDP ratio was found to have continued to rise amid the COVID-19 pandemic, while the G20 countries on average saw a decline in the figure, a local research institute said Wednesday, citing the Bank for International Settlements.

According to the Korea Economic Research Institute, the nation’s collective debt-to-GDP ratio surged by 48.5 percentage points from 217.8 percent in 2017 to 266.3 percent in the third quarter of 2021.

This outstripped the average growth of 19.6 percentage points, posted in the G20 nations over the corresponding period.

Compared to 2020, the G20 nations saw the ratio fall sharply by 23.8 percentage points as of the third quarter of 2021. But Korea posted a continuous increase of 8.1 percent during the pandemic.

As a result, Korea’s 266.3 percent has become comparable to the G20 average of 267.7 percent, though Korea had relatively low collective debt-to GDP ratio in the 2010s.

This outpaced a 3 percentage point increase, held by the G20 nations, over the same period. Among the group of 20 advanced and emerging countries, Korea was one of only two economies alongside China which posted growth of over 10 percent.

Korea’s corporate sector also recorded an increase by 21.2 percentage points in the ratio to 113.7 percent as of the third quarter of 2021.

The KERI cast worries over a situation where household real income has declined in the wake of rising consumer prices since last year, while household debt is mounting.

Statistics Korea data showed that household real income fell by 1 percent on-year in the first quarter and 3.1 percent in the second quarter of 2021. This marked the first negative growth in four years.

KERI researcher Lim said the risk of household debt would expand amid a scenario in which the Bank of Korea would move to conduct additional hikes in the benchmark interest rate to tame consumer prices.

He predicted that a possible higher burden of interest rates on household loans, in addition to slashed real income, would have negative impacts on the overall economy.

“A continuous debt growth at an excessive pace might bring about fiscal and financial crisis,” he said. “(The government) should seek to reduce the household and corporate debt via deregulations, which would be linked to income growth (of the both sectors).”