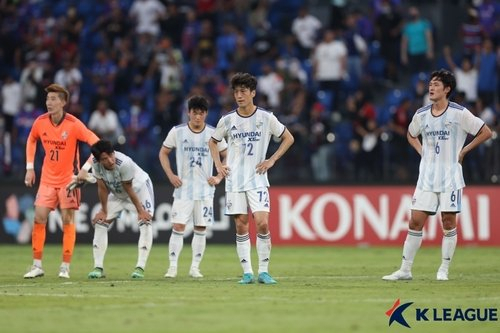 Ulsan Hyundai FC players react to their 2-1 loss to Johor Darum Ta'zim in the clubs' Group I match at the Asian Football Confederation Champions League at Sultan Ibrahim Stadium in Johor Bahru, Malaysia, on Monday, in this photo provided by the Korea Professional Football League. (Yonhap)

Despite being at the top of the tables, Ulsan Hyundai FC will return to K League action this week licking their wounds.

The K League 1 campaign will resume for all 12 teams on Thursday, the Children's Day holiday, after nearly a monthlong spring break. The league pressed pause while Ulsan and two other clubs, Jeonbuk Hyundai Motors and Daegu FC, played in the group stage of the Asian Football Confederation (AFC) Champions League.

Jeonbuk and Daegu qualified for the round of 16, but Ulsan, the 2020 AFC champions, were eliminated after finishing third in Group I.

Ulsan lost twice in six matches of the group stage after going undefeated in the first nine K League matches this season with seven wins and two draws. Ulsan managed just seven goals in six contests in the AFC tournament, compared to 15 goals in nine matches to lead the South Korean league.

Perhaps studying the K League 1 tables will make Ulsan players feel better about themselves. With 23 points, they sit five points clear of Incheon United for the top spot. With seven wins and two draws, Ulsan are the only unbeaten team in the league this season.

They will have a great shot at extending that streak when they face Suwon Samsung Bluewings at 4:30 p.m. Thursday at Suwon World Cup Stadium in Suwon, some 45 kilometers south of Seoul. This will be the first meeting of the two in 2022.

Suwon have been going in the opposite direction from Ulsan, with zero win in their last seven contests dragging them down to 11th place. The slide cost head coach Park Kun-ha his job, and Lee Byung-geun took the reins on April 18.

With seven points, Suwon are just two ahead of Seongnam FC for last place and automatic relegation to the K League 2. Suwon have never fallen to the second division since the promotion-relegation system was put in place in 2013.

Incheon United, the biggest surprise of the season so far, will try to keep pace with Ulsan when they visit Suwon FC on Thursday. Suwon FC have conceded the second-most goals this season with 15, and they will have to contain Incheon's striker Stefan Mugosa, who has scored seven of the club's 10 goals and has won the first two Player of the Month awards this season.

Jeonbuk, the five-time defending champions, have put a slow start behind them with three consecutive wins, and they will face FC Seoul on Thursday. Jeonbuk have beaten FC Seoul five straight times, dating back to June 2020, and have put up nine wins and a draw in their past 10 meetings.