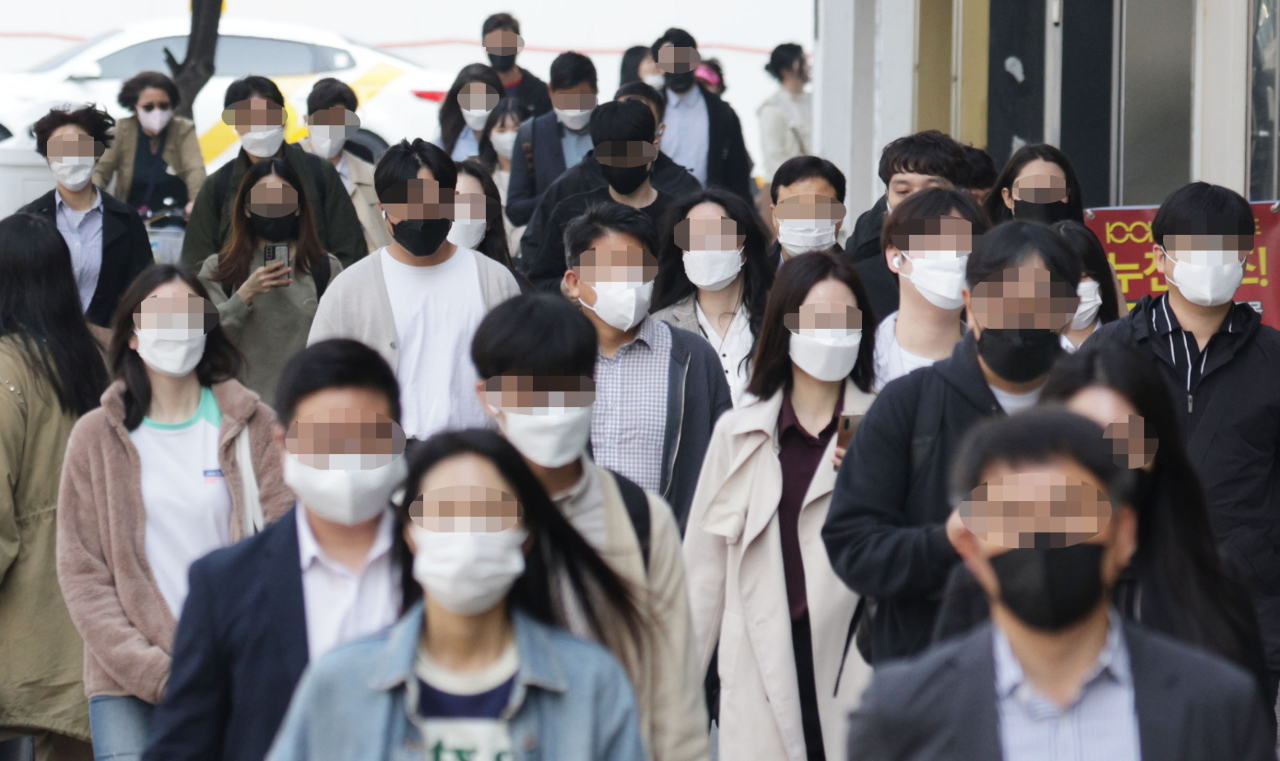 Commuters wearing masks walk on a street nearby the Yeouido subway station, Seoul, Monday. (Yonhap)
People seemed reluctant to take off their masks, although the country’s outdoor mask mandate was lifted on Monday. For various reasons, it was difficult to find people not wearing masks than those wearing them.

“It is rather inconvenient to take off a face mask outside and put it back on when entering an indoor space,” said a 32-year-old female graduate student surnamed Cho in Seoul when asked why she still wore a mask outside, even though the mask rule had been scrapped.

Chung, a 39-year-old man who works in Gyeonggi Province, said, “I have not seen a single person who is not wearing a mask.” Chung added, “I think people are not taking off their masks as they still feel unsafe.”

Some also said they decided not to take off their masks, given that many people are still wearing them.

Starting Monday, South Korea’s outdoor mask mandate has been lifted for the first time in some 18 months since the government introduced the antivirus measure in October 2020.

According to the Korea Centers for Disease Control and Prevention (KCDC), masks are no longer be required in most public outdoor settings, including weddings, physical education classes at school, outdoor subway station platforms and amusement parks.

Wearing masks, however, is still recommended when it is difficult to keep a 1-meter distance from other people at gatherings, as well as settings where more than 50 people can be seated.

People with COVID-19 symptoms and those who are at higher risk of developing COVID-19 are suggested to wear masks as well.

In the meantime, wearing a face mask in enclosed spaces will continue to be mandatory. Public transportation services such as buses, subways and trains, are part of the indoor mask mandate.

The government decided to ease the country’s mask rule on Friday last week amid the weakening pandemic.

On Monday as well, the government’s daily COVID-19 cases continued to drop to reach 20,084, bringing the total caseload to 17,295,733, according to the KCDC. It is the first time that the daily figure came to the 20,000s since early February.

The country added 83 COVID-19 deaths Monday, increasing the death toll to 22,958. The fatality rate stood at 0.13 percent. The number of critically ill patients reached 461, down 32 from the previous day’s 493.