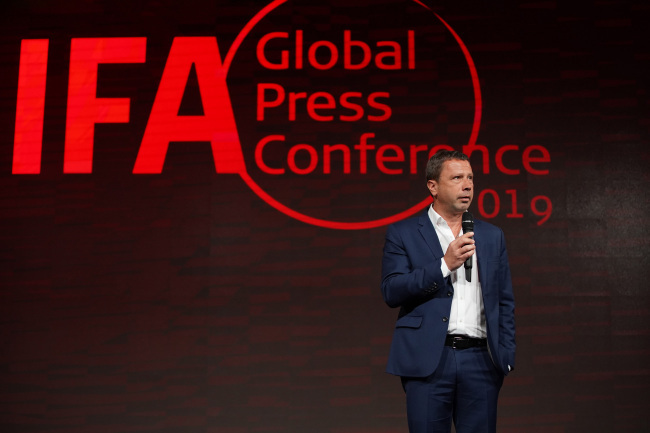 IFA Executive Director Jens Heithecker during IFA 2019 (Herald DB)
Organizers of Europe’s biggest consumer electronics show, Internationale Funkausstellung Berlin, said Thursday it plans to ban companies from Russia and Belarus from the event this year in the German capital, as it pledged to go ahead with in-person exhibitions for the first time in three years.

The comment signals IFA’s decision against Russian firms as being similar to that of the Mobile World Congress in 2022 in Barcelona, Spain. GSMA, the organizer of MWC 2022 in early March, also restricted the attendance of Russian technology firms, as Russia’s invasion of Ukraine unfolded.

“It is crystal clear, as long as we have this situation, we will not allow exhibitors from Russia and Belarus to IFA,” Jens Heithecker, executive vice president of Messe Berlin Group and the IFA executive director, said in a press conference with reporters in the Asia-Pacific region, adding the IFA organizer will follow German rules in regards to such actions.

This came a day after Heithecker announced plans to resume in-person exhibitions at IFA 2022 after a two-year hiatus. The full-scale event dedicated to consumer electronics and home appliances will take place Sept. 2-6.

Among the announced attendees is Lotte Hi-Mart, a South Korean retailer of electronic goods. IFA will also team up with Korean organizations such as the Korea Electronics Association and Korea ICT Association for its startup program called IFA Next.

Consumer electronics giants in Korea such as Samsung Electronics and LG Electronics have yet to announce their attendance for IFA 2022.