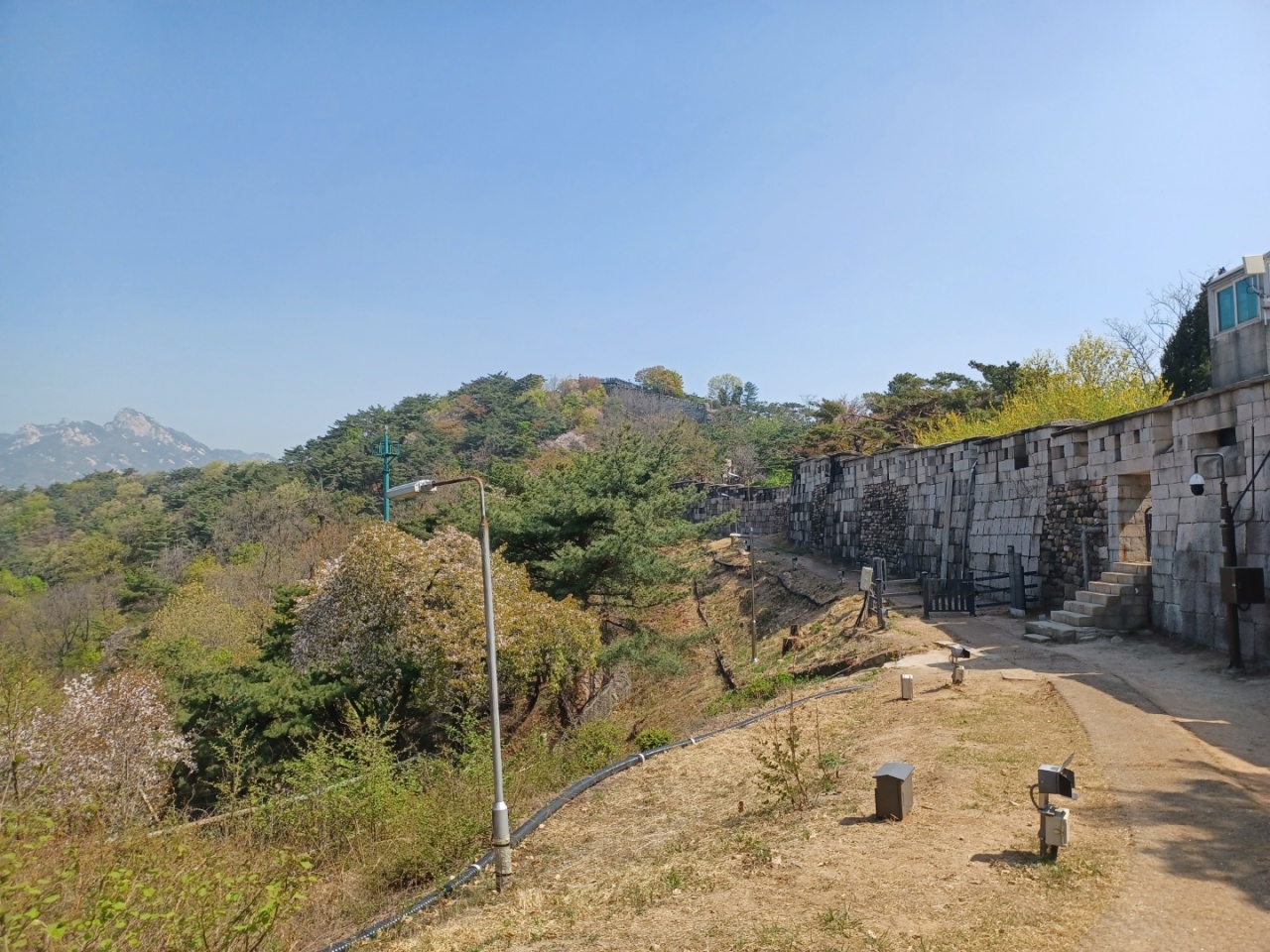 The connecting passage from Cheongundae Information Center to Gokjang, a crescent-shaped structure that protrudes from the main fortress wall. (Lee Si-jin/The Korea Herald) 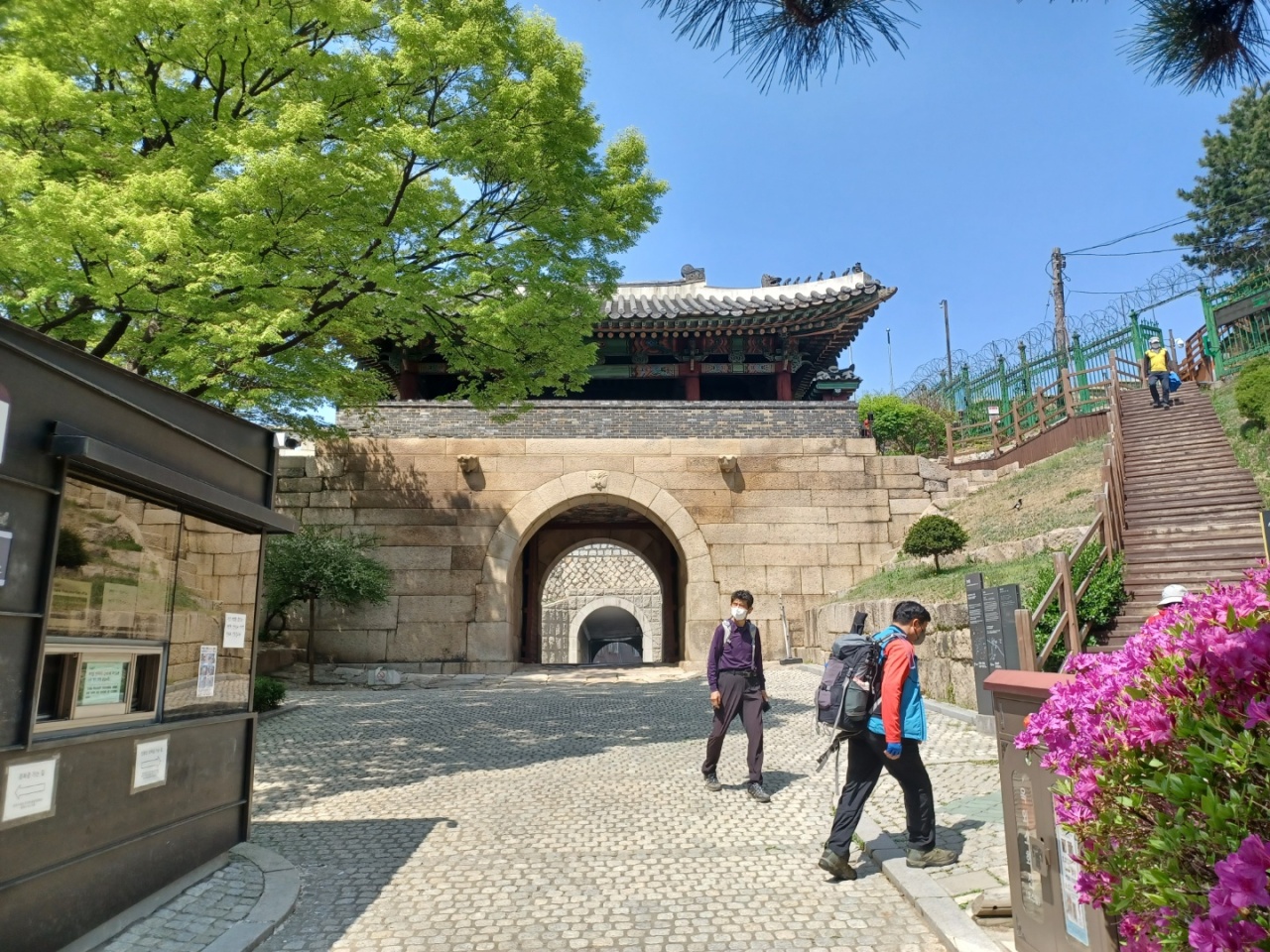 The Changuimun Gate in Jongno-gu, central Seoul (Lee Si-jin/The Korea Herald)
As the trees start to dress in green and the warm breeze brings a spring-like atmosphere, mountain lovers are in search of mountains to scale. These passionate trekkers will be surprised by the new mountain trail which opened to the public for the first time in 54 years.

The hilly path of Bugaksan was used as an escape route for the North Korean commandos, who had failed in their attempt to assassinate then-South Korean President Park Chung-hee. Among them, North Korean infiltrator Kim Shin-jo was captured alive.

Since then, the mountain had been closed to the public.

Though the northern part of Bugaksan was opened in 2020, the southern side of Bugaksan remained a mystery to the public -- until the government announced the opening of part of the mountain that lies behind Cheong Wa Dae.

On April 6, the entire 5.2-kilometer trail on Bugaksan opened to the public.

The mountain and the Fortress Wall of Seoul, known as Hanyangdoseong, can be seen after passing through one of the five information centers at Malbawi, Sukjeongmun, Gokjang, Cheongundae and Changuimun.

Easily accessed from Gwanghwamun Station on Line No.5 and various bus stops, the Changuimun Information Center is considered the ideal starting point to enjoy Bugaksan trail. 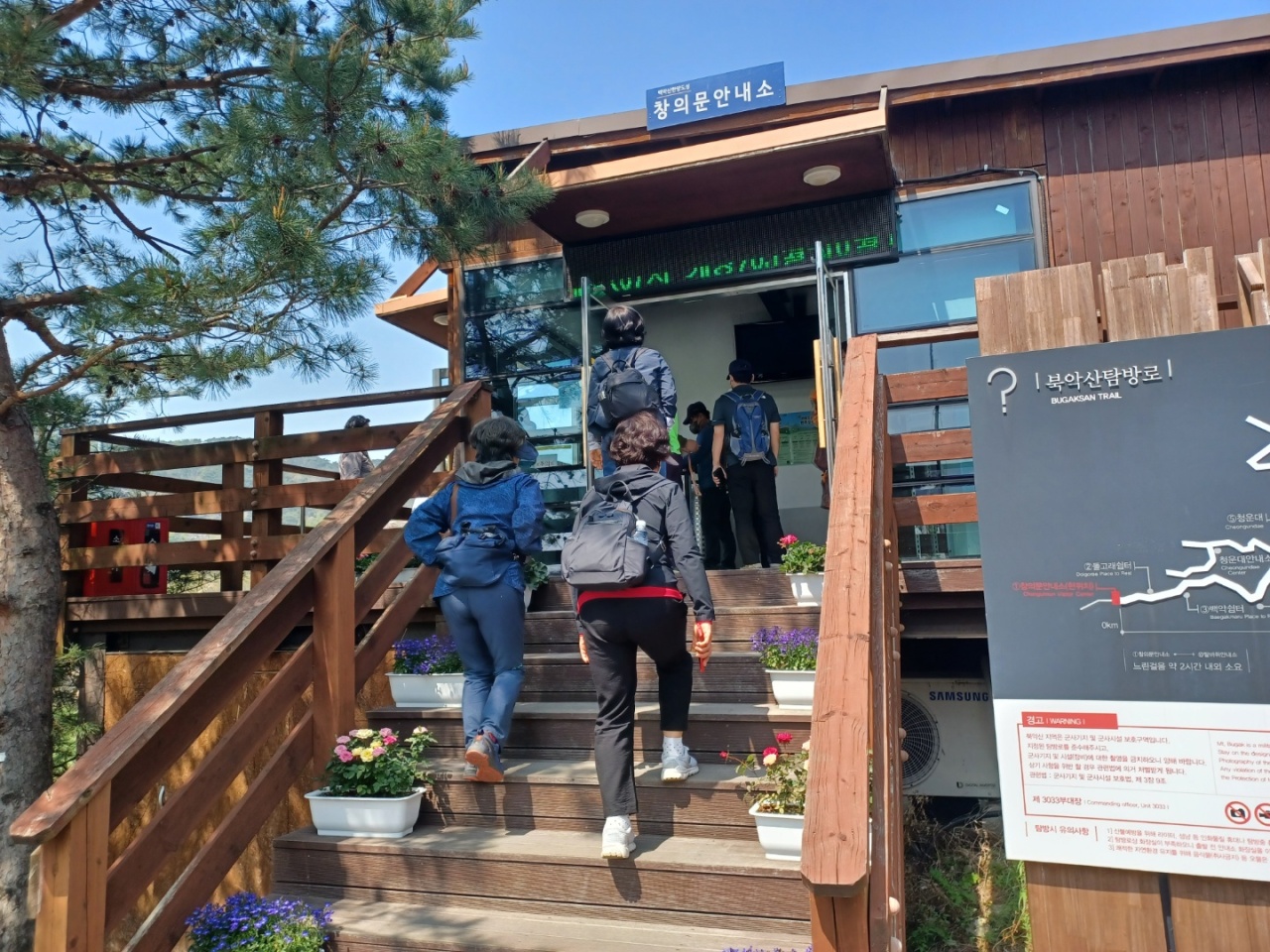 The Changuimun Information Center (Lee Si-jin/The Korea Herald)
Climbing the wooden stairs on the right side of Changuimun Gate, the green-colored iron fence covered with barbed wires let visitors know that the mountain was a military-controlled zone until a few years ago.

Once visitors set foot in the information center, they are asked to wear entrance passes while on the Bugaksan trail.

“There are still many people who bring their ID cards or passports, but they are no longer required, as the government stopped ID checks starting on April 5, 2019. Prior reservations are also not required,” a Bugaksan official at Changuimun Information Center told The Korea Herald on April 21.

“A special way to enjoy the beautiful Bugaksan trail is to walk with a guide, who explains the rich history of the mountain twice a day at 10 a.m. and 2 p.m,” the official added.

Though the mountain welcomes visitors with a flat road for two to three minutes, it soon tests their strength and patience with seemingly unending steep stone steps and wooden stairs.

After passing two rest areas -– the Dolphin Rest Area and Beagak Rest Area -- and an intense 20- to 30-minute climb of stairs, visitors can see a huge pine tree surrounded by a low stone fence. This tree signals that the mountain’s peak is near. 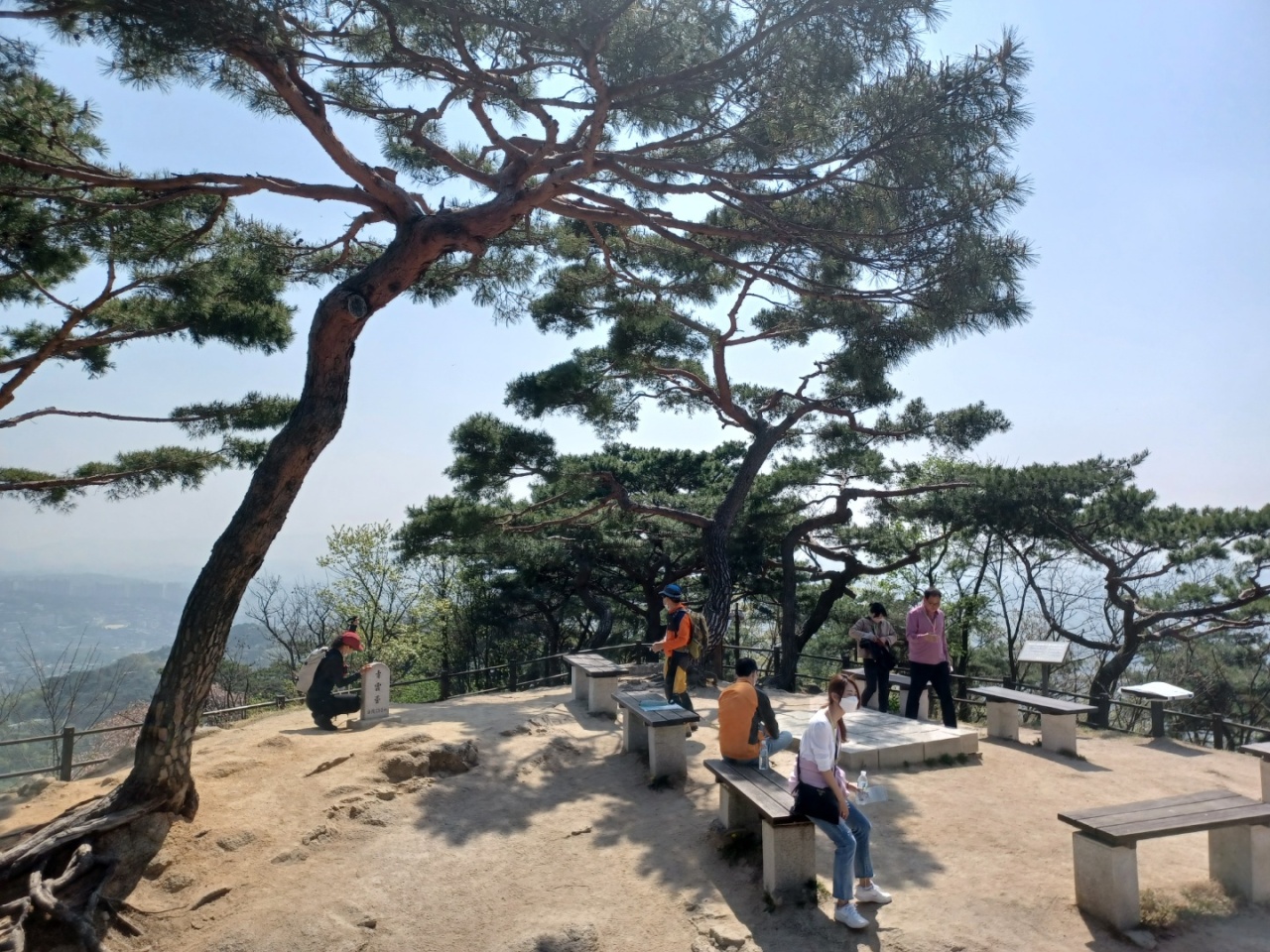 Visitors enjoy their time at the Cheongundae Peak on April 21. (Lee Si-jin/The Korea Herald)
The “Jan. 21 Incident Pine Tree” still holds traces of the vicious battle between South Korean soldiers and North Korean infiltrators, with 15 bullets embedded in it.

“Climbing small mountains in Seoul has been a way to take a break from urban life and a way to enjoy outdoor exercise with my family during the COVID-19 pandemic. But I think the historical sites and evidence from the not-too-distant past are what make Bugaksan trail more special,” a 48-year-old retail company worker surnamed Lee said, while taking a short break near the pine tree with his 12-year-old son. 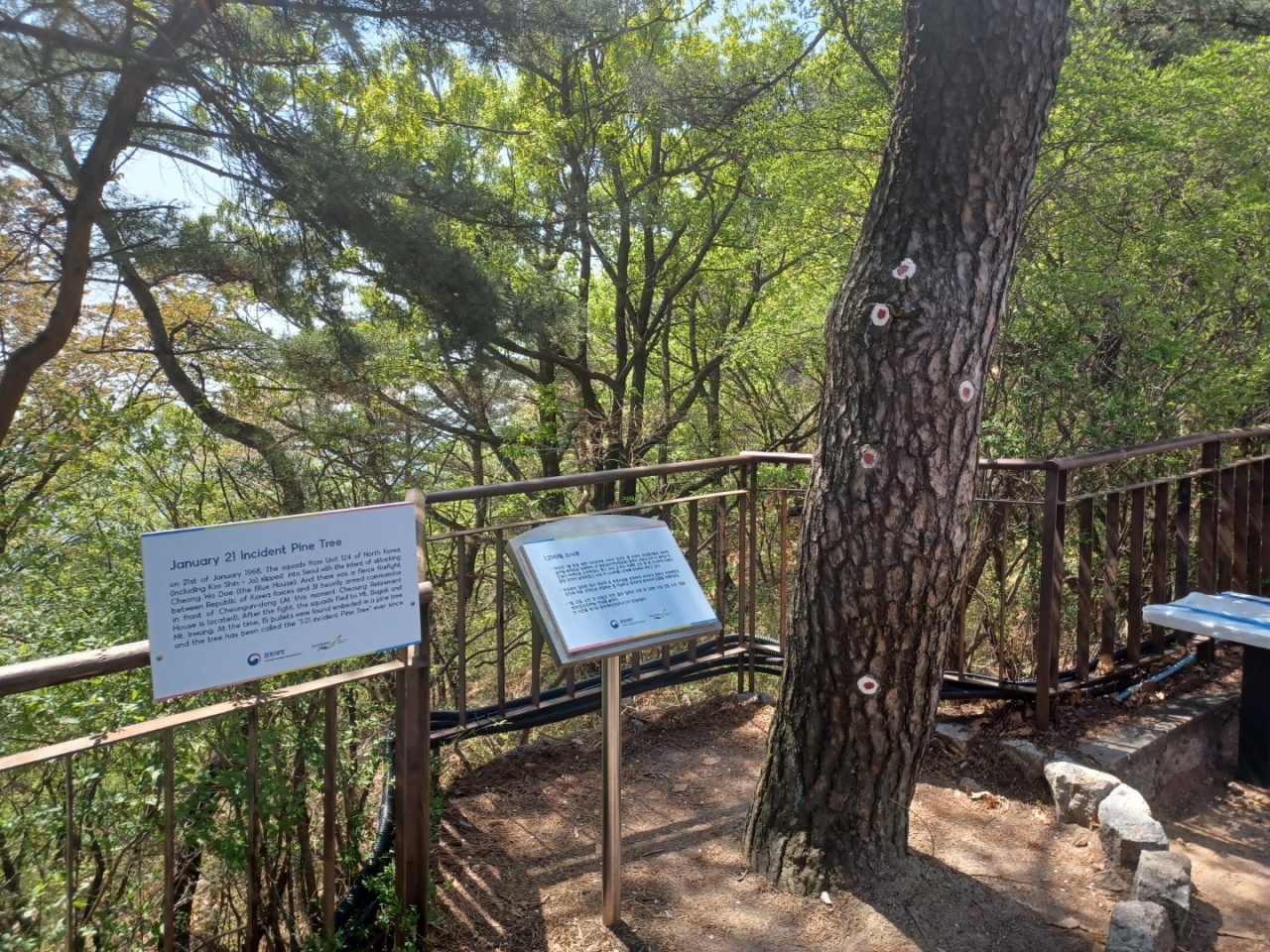 The Jan. 21 Incident Pine Tree shows evidence of the fierce firefight between South Korean forces and North Korean infiltrators on Jan. 21, 1968. (Lee Si-jin/The Korea Herald)
While many excited visitors take out their smartphones to photograph the beautiful scenery of the mountain, an official recommends that you not shoot from certain angles.

“Officials from the Korean Cultural Heritage Foundation, Seoul Metropolitan Government and Jongno-gu are present at various sites of Bugaksan to prevent forest fires. But they also caution visitors not to take pictures of the CCTV cameras for security reasons,” a Bugaksan official said.

Walking on the bumpy road for three to five minutes along the straight stone wall, the wooden benches signal Cheongundae Peak, the apex of Bugaksan.

While some take Instagram photos posing next to a stone named Cheongundae, others look around and enjoy the panoramic view of Seoul, Bukhansan and Hanyangdoseong. Hanyangdoseong is the boundary that demarcated Hanyang, the capital of the Joseon Kingdom. 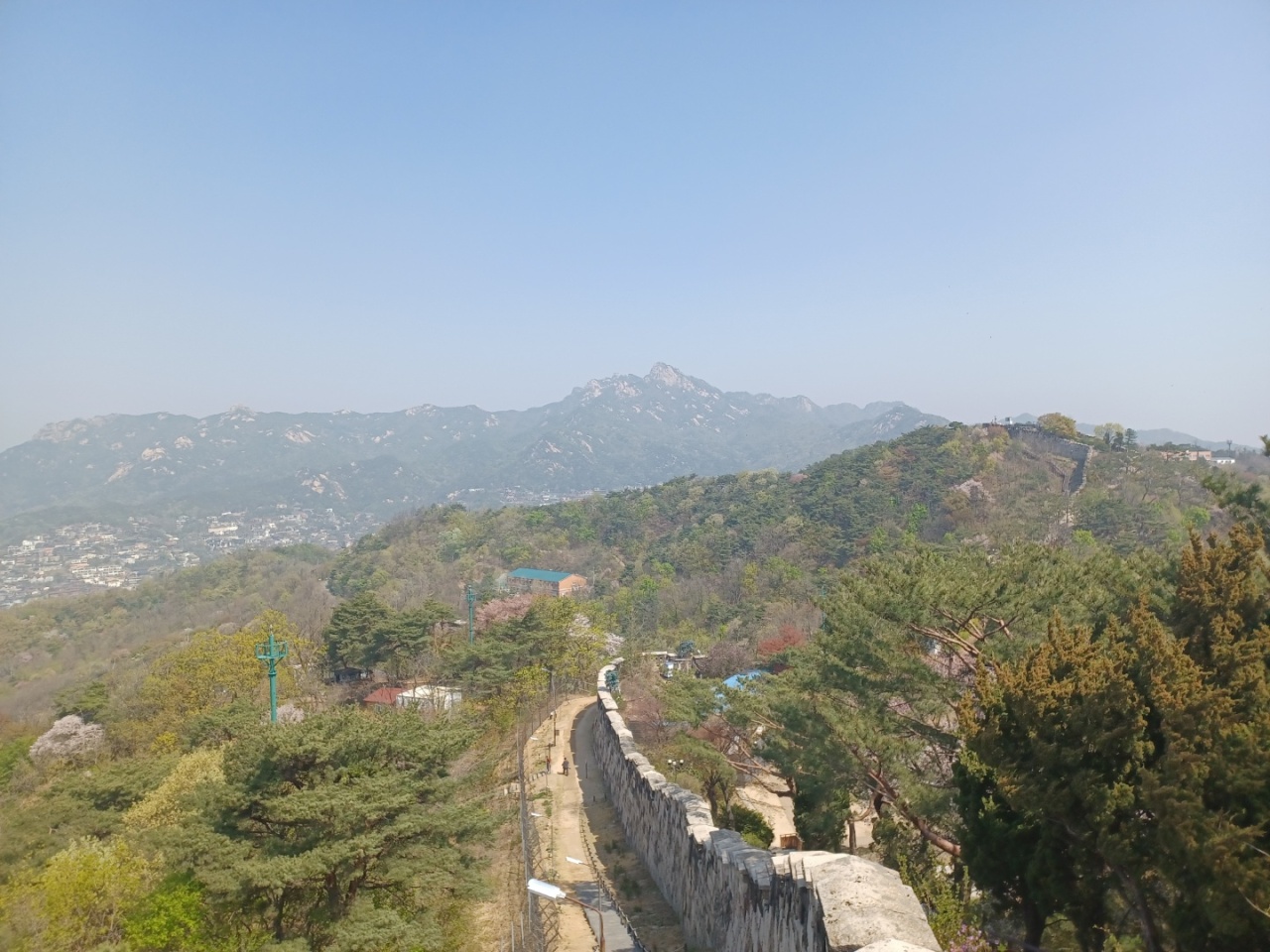 A panoramic view from the Cheongundae Peak includes a stone fortress wall and peaks of Bukhansan on April 21. (Lee Si-jin/The Korea Herald)
“After it opened to the public for the first time in 54 years, I think the mountain is visited by people of all ages, ranging from teenagers to people in their 60s to 70s. Maybe Bugaksan holds special meanings for many people,” a housewife in her late 40s surnamed Kim said.

Kim believed that young people might take Bugaksan to be a newly trending mountain course, while people from older generations might want to experience the rich history that the mountain has held for a long time.

On the path to the Cheongundae Information Center and the northern part of Bugaksan, one can see warning signs, a training ground for military dogs and border posts. They are reminders that the trails were restricted zones for security reasons. 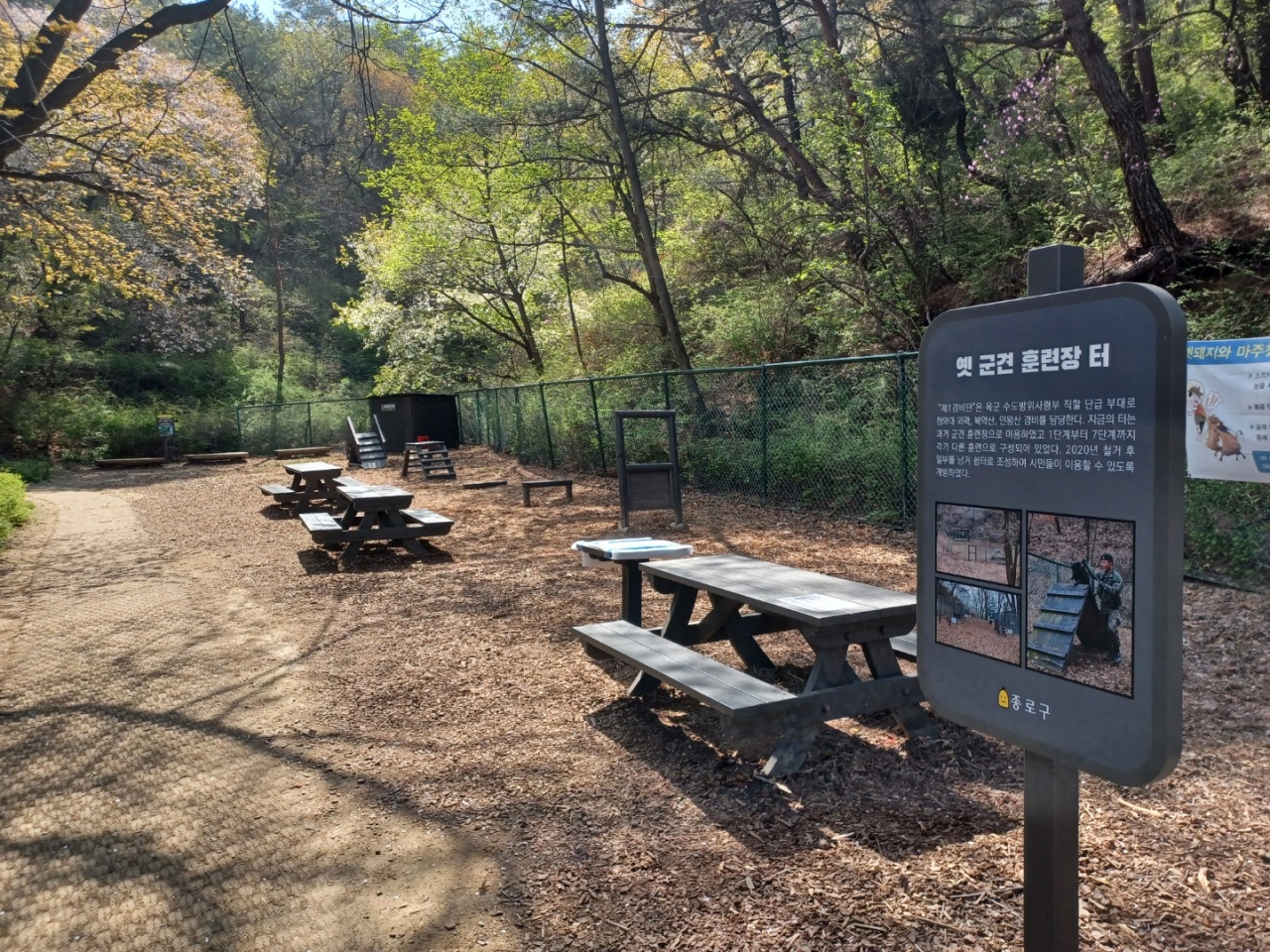 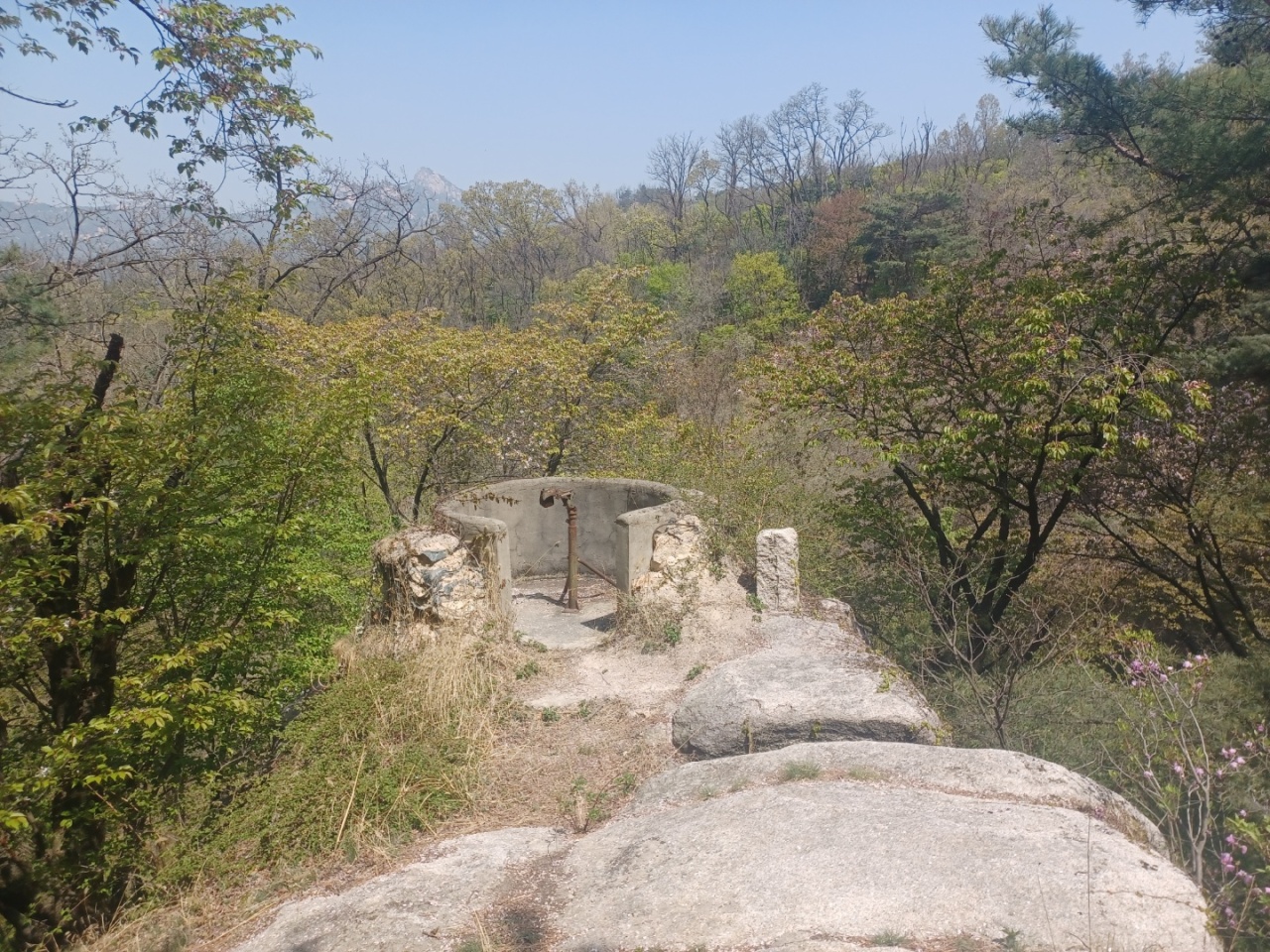 Listening to the rhythmical sound made by the spikes of climbing sticks hitting stones while families and friends talk under the bright sun, one can feel that spring is in the air.

The stone walls aside, the road in the woods presents a different taste of Bugaksan with lightly swaying flowers, waving tree branches dressed in green and twittering birds.

After a 15-minute walk on the trail outside of Cheongundae Information Center, the dirt road and wooden stairs suddenly change into a paved road, signaling the return to the more familiar landscape of Seoul with speeding cars and tall buildings.