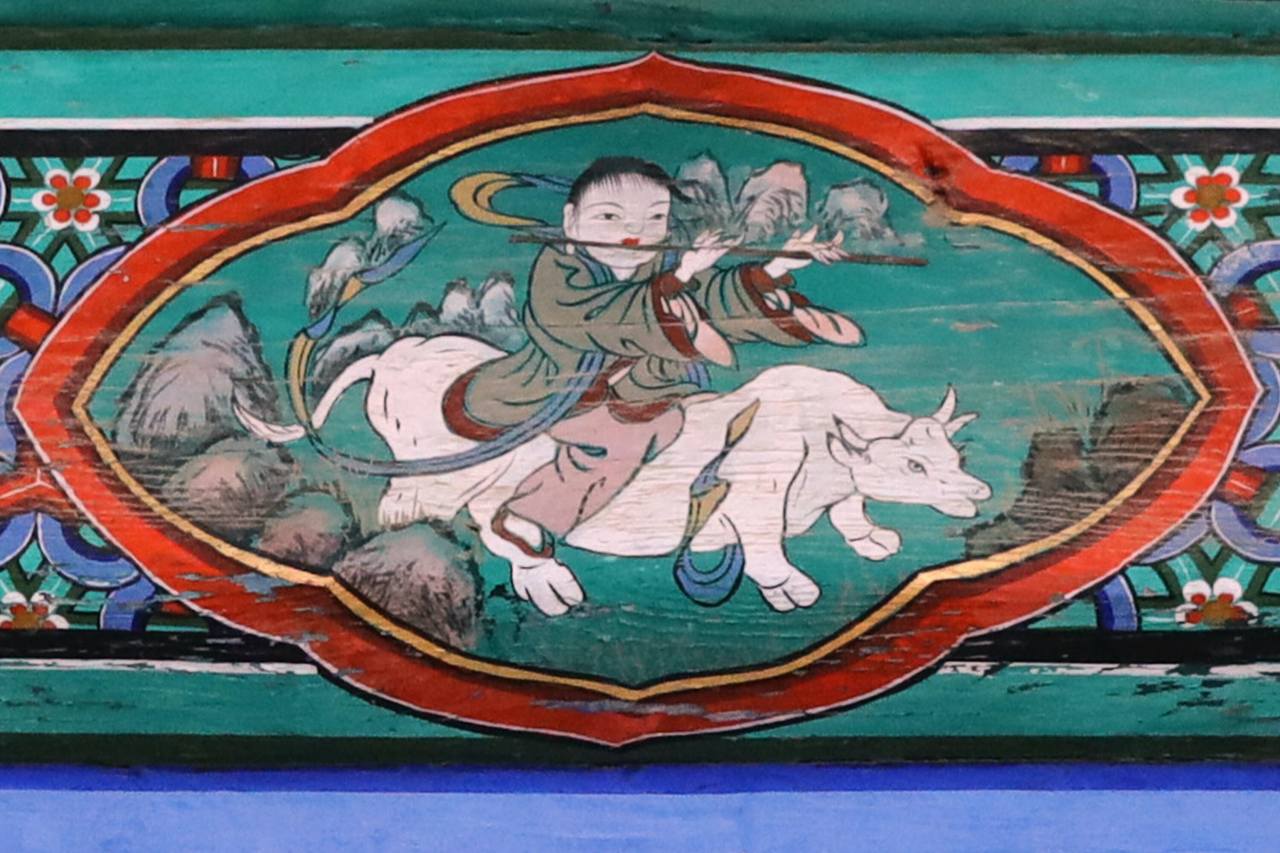 A boy rides an ox in this Buddhist painting at Haeinsa, a temple located in Gayasan National Park, South Gyeongsang Province, depicting the state of managing a wandering mind. Photo © Hyungwon Kang
Cattle have long been an important part of Korean culture as members of the workforce, as Korea has traditionally been an agrarian society.

Only well-to-do families owned cattle. Owning a cow or bull back then is equivalent to owning a tractor these days.

Before modern commercial feed became available, feeding cooked meals to “hanwoo” – the term for Korean cattle -- during fall and winter meant that at least one person in the family had to take care of the cow or bull, preparing chopped dry straw boiled with broth to make organic meals.

Since bulls, which are uncastrated male cattle, naturally fight to determine hierarchy, villagers organized bullfighting as a cultural tradition when the animals were not busy toiling in the fields.

In bullfighting and in rodeos, bulls and/or people are often injured or killed. Not in Korea.

Korean bullfighting is unique in that the fighting bulls, often weighing over a metric ton, never hurt people.

No matter how large and powerful the bulls get, Korean bulls are docile to humans, with pierced nose-rings installed to control the beast of burdens from when they are around 6 months old.

The oldest visual record of cattle in Korea is seen on a rock carving from the Stone Age, at the Bangudae Petroglyphs site, National Treasure No. 285, near Ulsan.

Researchers count over 300 images of whales, land mammals and human figures in the rock carvings at the Bangudae site.

Once revered as a family asset, Koreans’ love for cattle continues today -- albeit more as part of cuisine. Since cattle are no longer being used in agriculture or for pulling carriages, today’s hanwoo is in high demand for its delicious beef.

Hanwoo beef comes from hanwoo cattle, which are typically butchered at 24 to 30 months old. In Korea, it is more popular than the cheaper imported beef from Australia, Canada and the United States.

Hanwoo fighting bulls live longer and are fed a nutritious diet to help them build endurance and muscles while going through regular physical exercise to become super athletes. Hanwoo fighting bulls can typically enter the arena to fight from around age 4. There are bulls who are more than 10 years old still competing in bullfights.

The athleticism of the fighting bulls is evident in the circular arena, when the testosterone-rich bulls display dominant behaviors such as deep throbbing howls while kicking up sand before they charge at each other, butting heads with great force. A victorious bull often runs around the arena at great speed, just like a speedy bison at the Yellowstone National Park in the US which can run at a speed of up to 48 kilometers per hour. 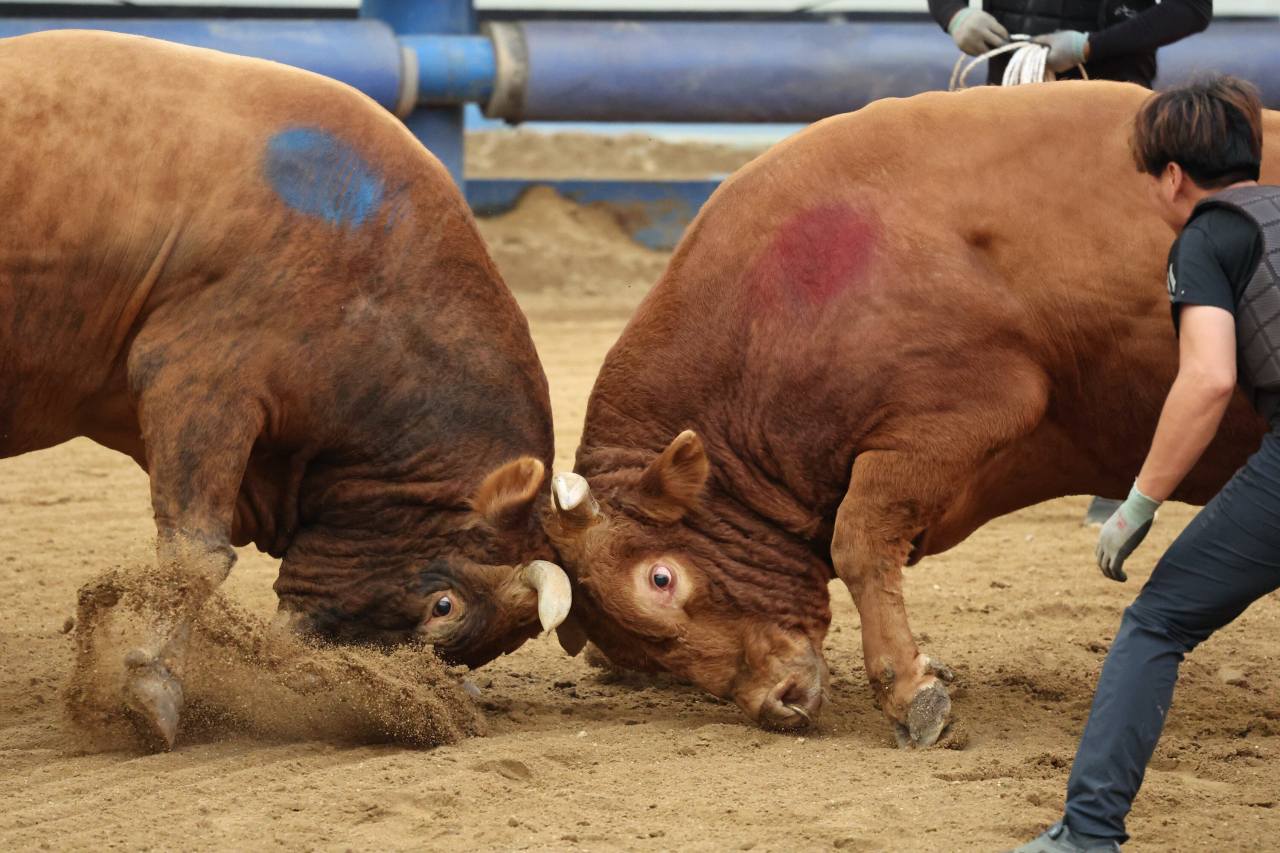 The sheer unpredictability of bullfights makes for perfect “sports betting,” where spectators can bet anywhere from 100 to 10,000 won ($0.07-$7.85) on each fight, with varying degrees of possible odds. The game lasts a total of 30 minutes with a maximum of six rounds, with each round lasting five minutes, during which the bulls fight continuously.

In Korean culture, bulls are commonly known as ox, which is one of the 12 animals in the Korean zodiac. People born in the Year of the Ox are associated with personality traits like being sincere, hard-working, and stubborn.

One of the goals in Buddhism is to make sense of the four phases of life -- birth, aging, sickness, and death. An ox often appears in Buddhist art as a symbolic representation of our wandering minds.

A boy looking for a loose ox in Buddhist art represents a mind which is far from its physical reality. On the other hand, a boy riding an ox in Buddhist paintings refers to the state of managing a wandering mind, a path to enlightenment.

“In Buddhist art, an image of a bull symbolizes our wandering minds. Our minds can be as open as the vast ocean, but at times it is so tight that there’s not even a hole for a needle to penetrate. The goal is to be enlightened and learn to manage our minds.” said Ven. Jibong, the director of the Yeongcheon History Museum in Yeongcheon, North Gyeongsang Province.