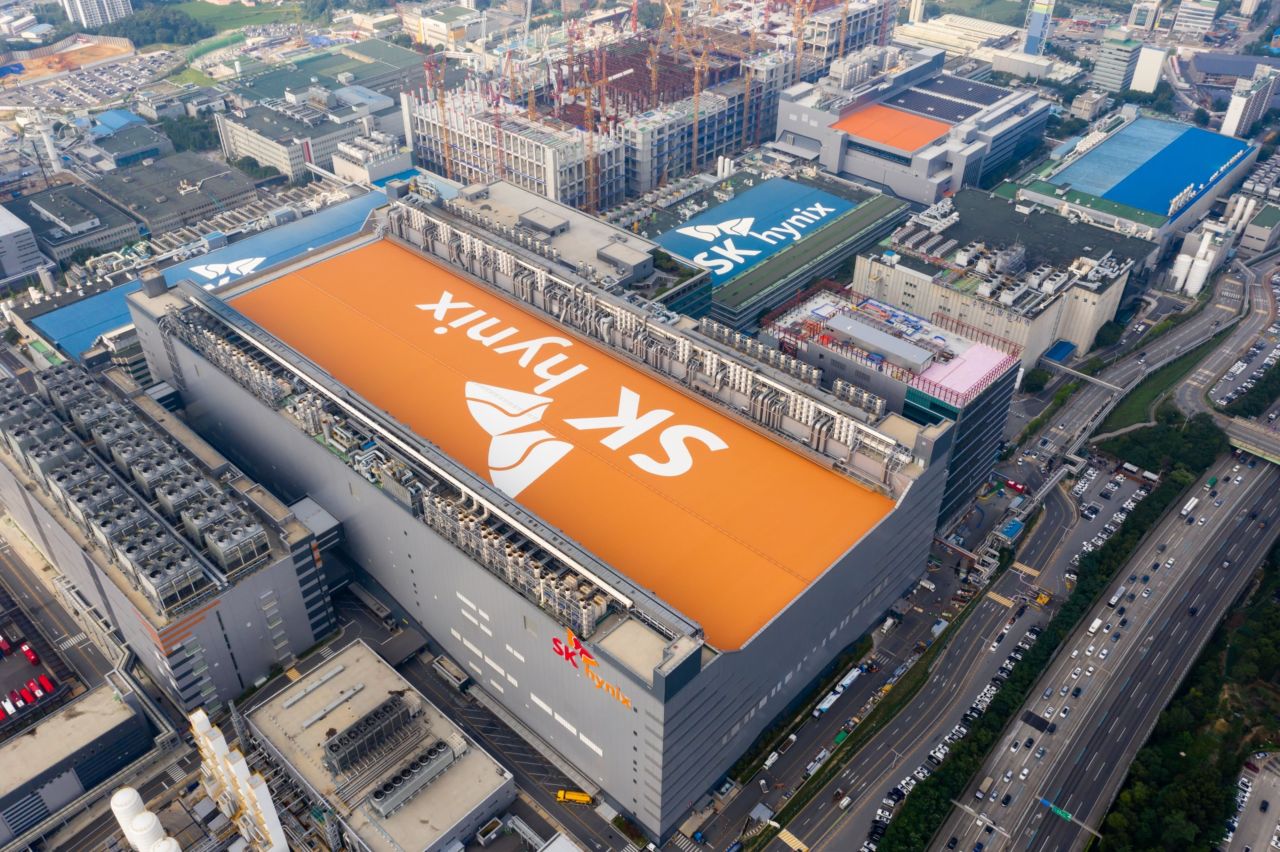 The SK hynix logo is displayed atop the company‘s semiconductor plant in this aerial photograph taken above Icheon, Gyeonggi Province, on July 22, 2019. (Bloomberg-Yonhap)
South Korean memory chipmaker SK hynix saw its best first-quarter revenue in history, while its operating profit jumped more than twofold compared to the previous year, despite weakening demand for consumer electronics and external uncertainties such as lockdowns in parts of China and Russia’s invasion of Ukraine.

According to an earnings guidance, SK hynix logged 12.16 trillion won ($9.63 billion) in revenue for the first quarter, up 43 percent on-year. This beat earnings consensus of local analysts provided by market intelligence FnGuide, at 11.78 trillion won.

The company’s first-quarter operating profit rose 116 percent to 2.86 trillion won, but the figure was slightly lower than the market consensus of 3.05 trillion won.

Noh Jong-won, president and chief marketing officer of SK Hynix, anticipated the consumer electronics goods demand to rebound in the second half of 2022, while the demand for memory chips for servers will remain solid throughout this year thanks to a data-center boom in 2018. He added that the lockdowns in China remain a concern.

The chipmaker also said it has allocated 380 billion won during the first quarter to reimburse for DRAM chip defects that occurred in 2020, Noh told shareholders.

The capital will be used to implement a two-year compensation plan, as some DRAM chips produced by SK hynix in 2020 had suffered quality degradation after a year of use, said The company did not disclose which client was affected and how many chips malfunctioned.

“I would like to apologize on behalf of SK hynix for the fact that this issue had occurred.”

Noh attributed the defect to changes in the manufacturing process to address the sharp upshot in demand and supply in 2020, following a DRAM downturn a year before.

The defected chips will be replaced for the next two years to come, according to Noh.

“We have had sufficient discussion with most of the customers that come up with the compensation plan, and most of the consumers also wished for replacement,” he said.

Moreover, Noh said SK hynix has already strengthened the quality validation process, and expected the reimbursement to have “not zero, but not large” impact on its overall DRAM manufacturing process.

Despite its record-high Q1 earnings, SK hynix shares fell 2.3 percent Wednesday on the Korea Exchange. Its market cap stood at around 79 trillion won, the third largest among all listed firms in Korea.