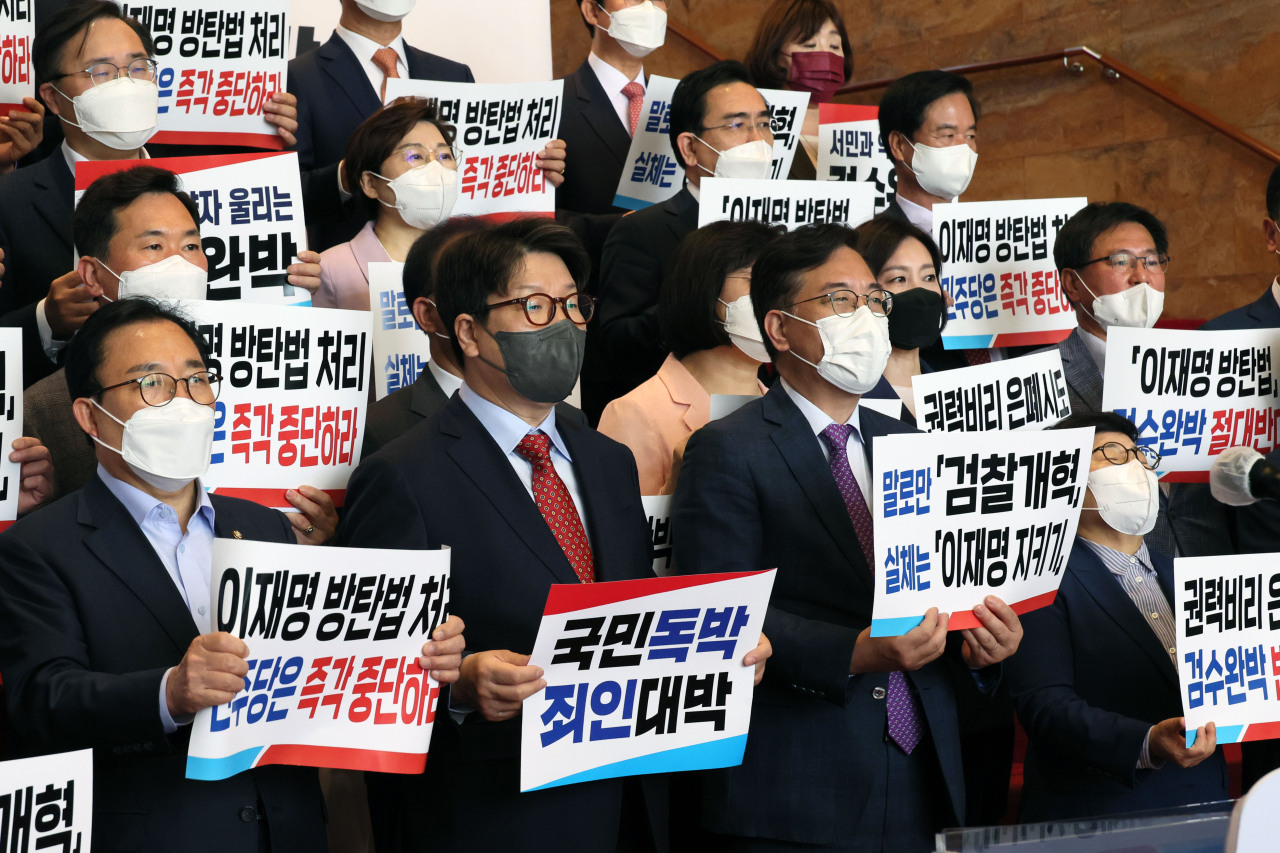 Lawmakers of the main opposition People Power Party chant during a sit-in protest held Wednesday in the National Assembly in Seoul on Wednesday. The party is hoping to block a bill pushed by the Democratic Party of Korea that would strip the prosecution of its investigative power. (Yonhap)
South Korea’s liberal Democratic Party of Korea is pushing to put the controversial prosecution bill up for a final vote, having arbitrarily passed the bill through a parliamentary committee by early Wednesday morning.

The National Assembly started a plenary session at 5 p.m. where the Democratic Party was targeting to present proposed revisions to the Criminal Procedure Act and the Prosecutors’ Office Act for a final vote. It is likely the bill is passed within this week no matter how fierce the opposition may be.

The liberal party was ultimately aiming to have the bill pass a final vote within April’s provisional assembly, which ends May 4, and have it promulgated by President Moon Jae-in at his last Cabinet meeting on May 3.

It would be just before President-elect Yoon Suk-yeol starts his term on May 10. Yoon was widely expected to veto the bill if he given a chance.

Rep. Park Hong-keun, floor leader of the Democratic Party, said in a party meeting Wednesday that his party “will not fail” in passing the bill at the plenary session, emphasizing that he will not be swayed by objections.

National Assembly Speaker Park Byeong-seug was scheduled to bring the floor leaders of the two rival parties to his office at 2 p.m. Wednesday to discuss if and when to hold plenary sessions for the bill to be processed.

But the speaker decided that the plenary session would be held as scheduled as no additional progress could be expected from the talks. He said in a statement that the People Power Party was to blame to abandoning the compromise and undermining the progress made toward peaceful negotiations.

The Democratic Party finished all of the previous procedures unilaterally shortly past midnight Tuesday, having its lawmakers hold a general session of the Legislation and Judiciary Committee and unilaterally run votes on the proposed revisions.

The revisions were put to a vote after the liberal party held a subcommittee meeting of the parliamentary judiciary committee at 9 p.m., held an agenda coordination meeting at 11 p.m. to officially schedule the general meeting at midnight.

The voting occurred in a matter of eight minutes amid fierce protest from members of the conservative People Power Party. Out of 18 members with the Legislation and Judiciary Committee, 11 are effectively affiliated with the Democratic Party and were in favor of passing the bill in question.

Through the committee-level discussion, the bill was revised to let the prosecution keep its investigative powers on corruption and economic crimes. The law enforcement agency will also keep its power to investigate crimes on elections until the end of 2022 in consideration of the upcoming local elections in June.

The prosecution is already limited to directly investigating only six types of crimes as directed under the Moon administration’s drive to reform the prosecution. The prosecution has been accused of using its power and authority for political purposes.

The Democratic Party decided to ram the bill through the legislative process on its own, after the bipartisan compromise it reached with the People Power Party broke down when the conservative bloc backtracked on the deal, citing unexpectedly strong criticism from the public.

Yoon with the People Power Party also expressed concerns about the bill, calling on the political circle to reflect on what is needed to protect the Constitution and the people

The People Power Party has concentrated all its efforts to voice opposition to the bill, with many of its senior leaders holding signs and making speeches before the press while the Democratic Party railroaded the bill through the Legislation and Judiciary Committee.

The conservative party was preparing to hold a filibuster at the Wednesday plenary session, aiming to delay the final vote on the bill pushed back as much as possible. Yet the Democratic Party was believed to be able to garner enough votes to nullify the filibuster if proceeded.

The minor left-wing Justice Party, which originally sided with the People Power Party in opposition to the prosecution reform bill as originally proposed, decided to effectively side with the Democratic Party after the ruling party upheld some of the demands from the Justice Party on the bill.

A filibuster needs 180 votes from 300 legislators to be nullified, and the Democratic Party with 171 seats could obtain as many as 184 votes, which would be more than enough to call off a filibuster and resume a plenary session.

In addition to six votes from its friendly outside lawmakers, the party is expected to be boosted with six additional votes from the Justice Party and one from People’s Party Rep. Kwon Eun-hee, a police officer-turned-lawmaker who has been internally at odds with her party’s direction.

The bill cannot be stopped from being put for a final vote then as filibuster cannot be repeated for the same bill.

Yet the People Power Party kicked off a filibuster as planned, with its floor leader Rep. Kweon Seong-dong taking the stand as the first debater for the filibuster. The party had run a protest at the stairway to the plenary hall prior to the plenary session, and Kweon has been encouraging all People Power Party legislators to participate and work to block the legislative push.

A filibuster can be started if the People Power Party requests for one to be held before a plenary session starts. The Democratic Party can run a vote to end the filibuster 24 hours after it starts, which provides the liberal party ample time to put it on Moon’s desk before his term ends.

If passed, the bill is expected to serve as a major obstacle to the start of Yoon’s five-year term, as his Cabinet picks are to face confirmation hearings in an uneasy environment.

Yoon is also expected to face hurdles in carrying out his campaign promises, as some of them will need approvals and support from the Democratic Party-dominated parliament.