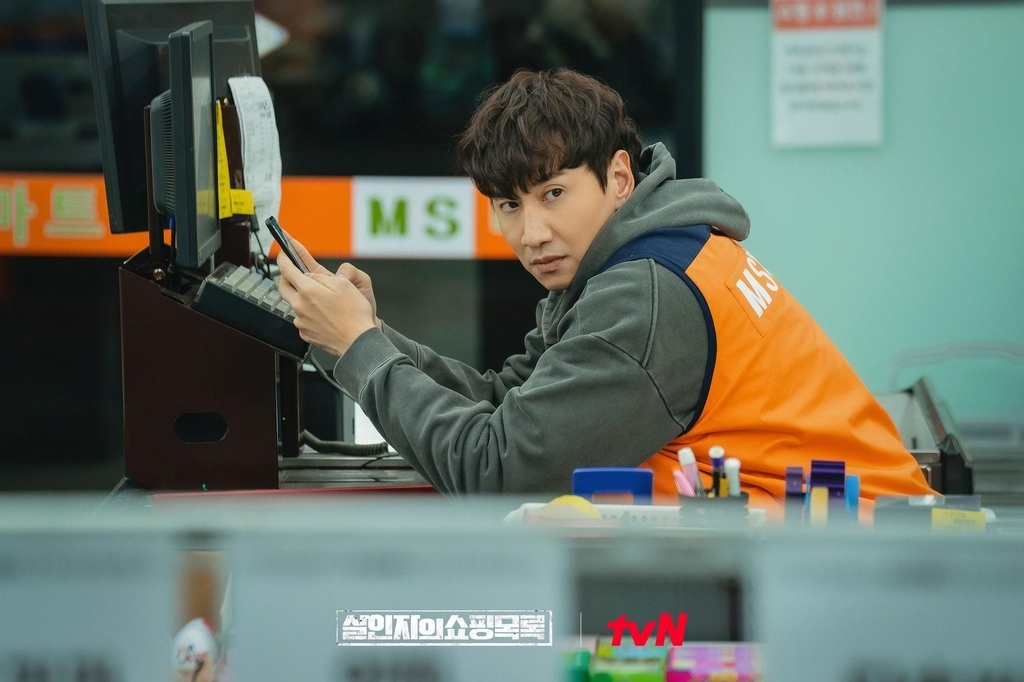 South Korean star actor and entertainer Lee Kwang-soo is back to the small screen as a cashier at a neighborhood supermarket in the upcoming mystery comedy "The Killer's Shopping List."

Motivated by the novel "The Killer's Shopping Mall" by Kang Ji-young, tvN's Wednesday-Thursday primetime series follows people who hunt for the killer in a mysterious murder case that occurs near a humble neighborhood supermarket named MS Mart.

Lee stars as Dae-sung, the son of the supermarket owner, who has outstanding memory and starts his own investigation into the case based on a receipt presumed to be left by the killer.

"The script was very interesting and exciting, and the character was really new to me," he said in a press conference streamed online on Monday. "I loved to do this project. I thought if I miss this chance, I might not get another chance to play a character this attractive forever."

"The Killer" is Lee's first TV series in about four years since the drama "Live" (2018) as a police officer. During the period, Lee appeared in movies, including the disaster film "Sinkhole" (2021) and the fantasy adventure "The Pirates : The Last Royal Treasure" (2022).

He said Dae-sung is a nosy person with boy-next-door looks, and memorizes every detail of frequenters of MS Mart. Due to his inquisitive character and good memorization, he is willingly embroiled in the murder case.

"Dae-sung is interested in everything and every person around him. He likes them. In that aspect, I and Dae-sung are very alike," said Lee, who earned stardom among Asian fans through the SBS variety show "Running Man." "But I tried to be a more friendly and familiar man that you can meet at your neighborhood."

Dae-sung's longtime girlfriend Ah-hee, a passionate young police officer who is determined to watch over the village and protect her boyfriend, is played by Kim Seol-hyun, also known as Seolhyun from K-pop girl group AOA.

The singer-actress said she did not try hard to act more comically or look funnier in her first comedy project.

"There are so many comical situations in the script, and I just tried to present my character in the way that the script depicts," she said. "And the longtime friendship with Lee Kwang-soo helped me create the larger-than-expected on-screen chemistry in the show."

Director Lee Eon-hee, who made the mystery film "Missing" (2016) and the crime comedy "The Accidental Detective 2: In Action" (2018), said she focused more on creating friendly characters in her first TV series, which had been originally designed to be a two-hour film.

"In a comedy, the characters need to get familiar with the viewers so that the viewers can laugh even in a small trivial situation," she said. "It is about a big crime that occurs in a small village. But it can happen around us. I try to present neighborhood incidents in a thrilling way."

The eight-part series will premier on Wednesday on tvN. (Yonhap)