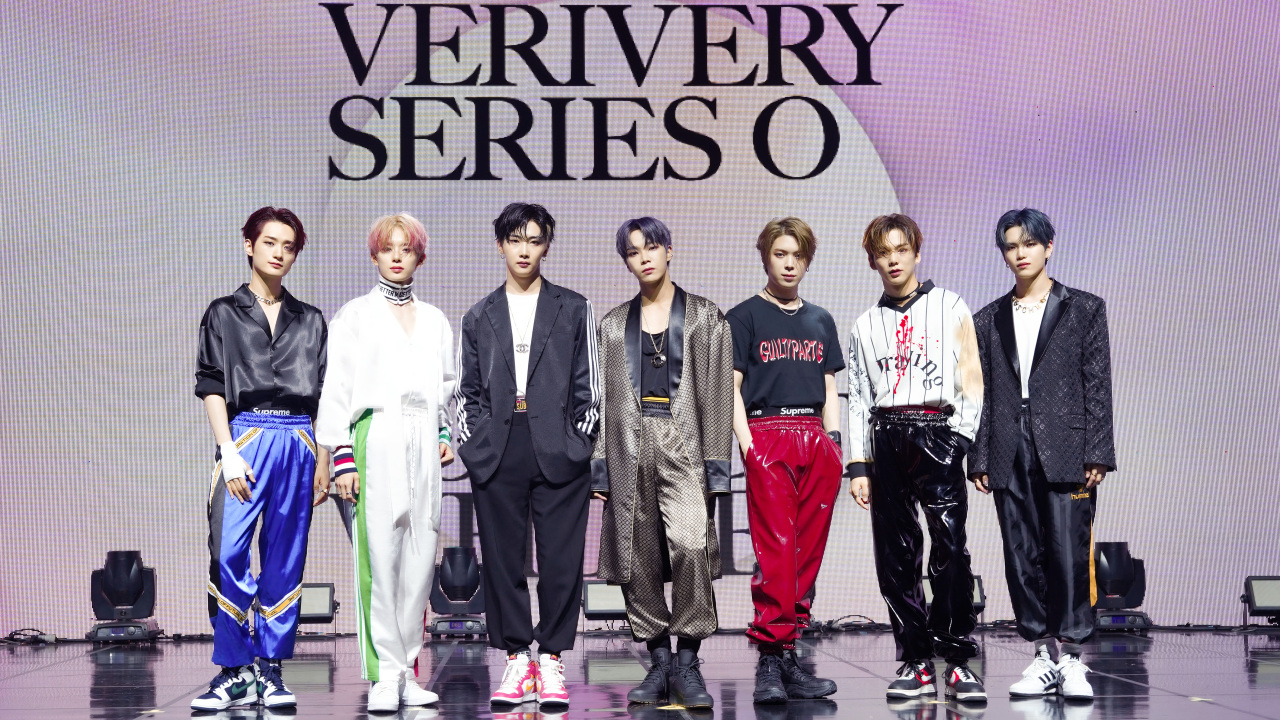 This marks a quick return, just about a month since the group dropped the digital single “Series O (Round 0: Who)” on March 23.

When asked how it feels to now have put out an LP, Yong-seung said it’s a dream come true for him. “I’ve always dreamed of meeting and greeting fans with our first LP, and I’m more than happy right now because I just made my dream come true. Since it’s an album made out of so much effort, I hope that it would be an album that everyone would like.”

In a press conference Monday, Min-chan described it as “an album that revolves around the key term ‘hello darkness’ and depicts the conflict between those who challenge the darkness and those protecting it.”

He continued, saying that the series of images the band had revealed, such as posing inside a fight club ring, was to show the tension between the two contrasting factors. Also, scenes in the music video where the bandmates fight in the dark, for example, vividly depict the band’s darkness.

The band’s “hello darkness” theme is a follow-up to the septet’s “Series O,” where an unknown identity invites the bandmates to step into a dark world called “O” and face a mysterious world. It also holds a message that the group wants to convey: We have no choice but to live together in the “darkness,” and the way of coexisting with other emotions solely depends on you.

If the band’s previous work, “Series O (Round 0: Who),” talked about the emotions of being imperfect, this time, Verivery’s album is built on the theme of having two contrasting feelings: being in the darkness and wanting to avoid darkness.

Leading the 12-song package is “Undercover,” which Yeon-ho described as “a song that goes well with the hello darkness theme and talks about darkness.” He went on to say that the song unfolds the story of how the two different things -- chasing after darkness and trying to avoid it -- eventually become one.

“It’s a Latin hip-hop genre song that we gave the first try. It’s a musical style that we have never done in the past, but we peppered with our color, and with our stage performance, the song is filled with dynamics,” he added.

Dong-heon chimed in, saying that in line with the dark theme, the music video illustrates how young people live with their own dark side and pain.

Talking about the choreography, Yong-seung said that the band‘s powerful dance moves on the stage are what fans should look forward to. He added that the choreography is a mixture of hip-hop and Latin music, filling Verivery’s performance with more vivacity and uniqueness.

As self-producers in the music scene, Dong-heon, Gye-hyeon, Yeon-ho and Yong-seung listed themselves as lyricists and composers once again for four side tracks: “Childhood,” “Velocity,” “Our Spring” and “Fine.”

Yeon-ho said the group penned many songs for the album, but they were only able to list four finally.

“All the four side tracks that round out the album are unique and worth listening to in their own way. ‘Childhood’ is a song that allows you to revisit your childhood, and ‘Velocity’ is a song that talks about having the ambition to run to a certain place. ‘Our Spring’ is a track that reminds you of your first love, and ‘Fine’ talks about the youth being a lost generation.”

With the new album, the septet hopes to show that Verivery is a band that has developed over time. When asked why, the bandmates said they have continuously shown different tunes and performances with its new releases. 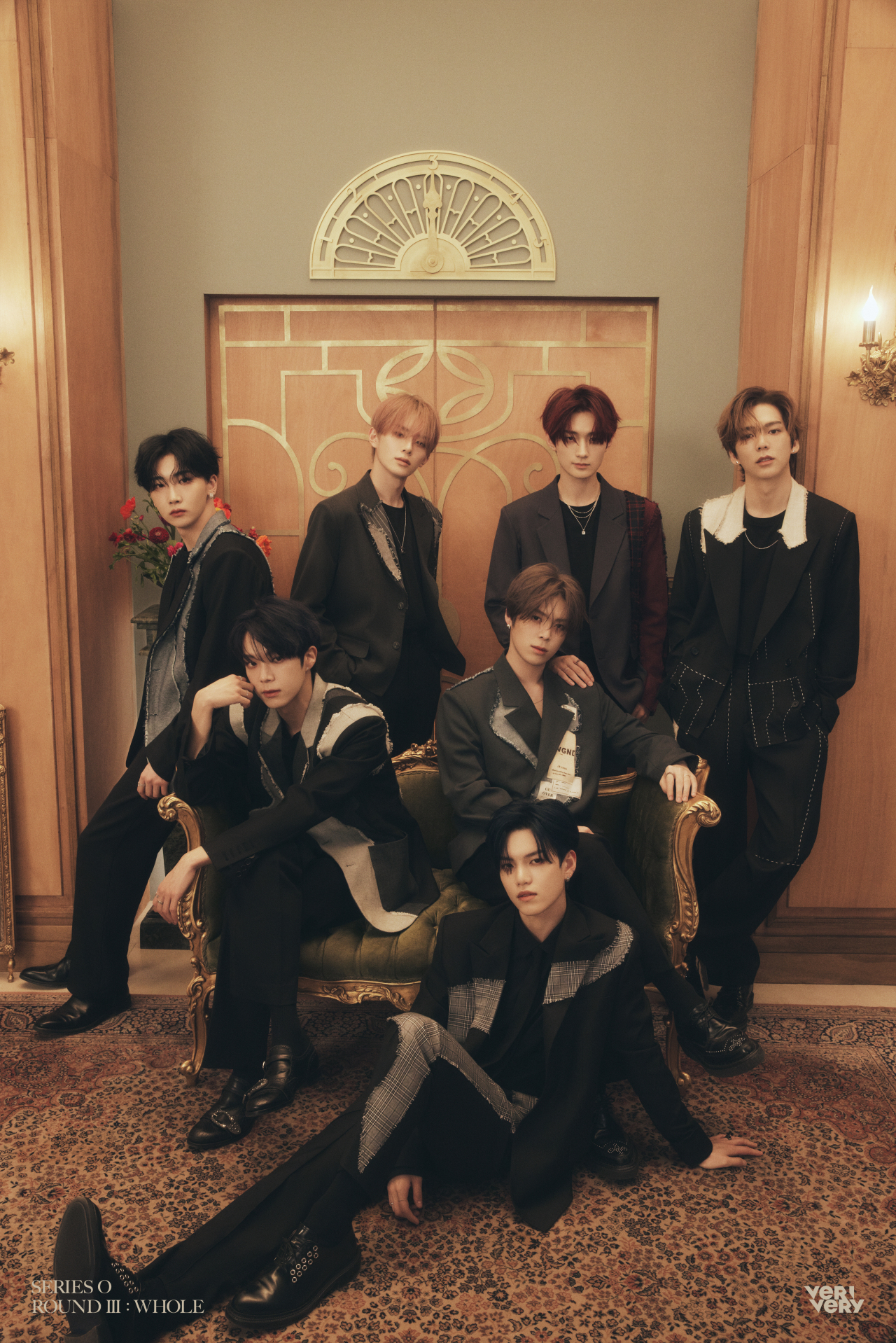 (Jellyfish Entertainment)
“I feel that we have matured a lot, especially while preparing for this album. Having a powerful stage performance is our strength, and we’ve always strived and opted for new genres. This time, we went for hip-hop-style music for the first time. It was hard at first, but I’ve realized that nothing is impossible if you keep on pushing the envelope,” Ho-young said.

Gushing about the new album, Dong-heon expressed his hope of winning the top spot on music programs, saying it’s a goal that currently stands in front of the band. Apart from doing well on music programs, he got candid about wanting to promote Verivery around the globe.

At the end of the press conference, Dong-heon also hinted that many things are waiting in 2022 for Verivery.

“We’re planning to do many things this year, so please look forward to what we do this year,” he said.