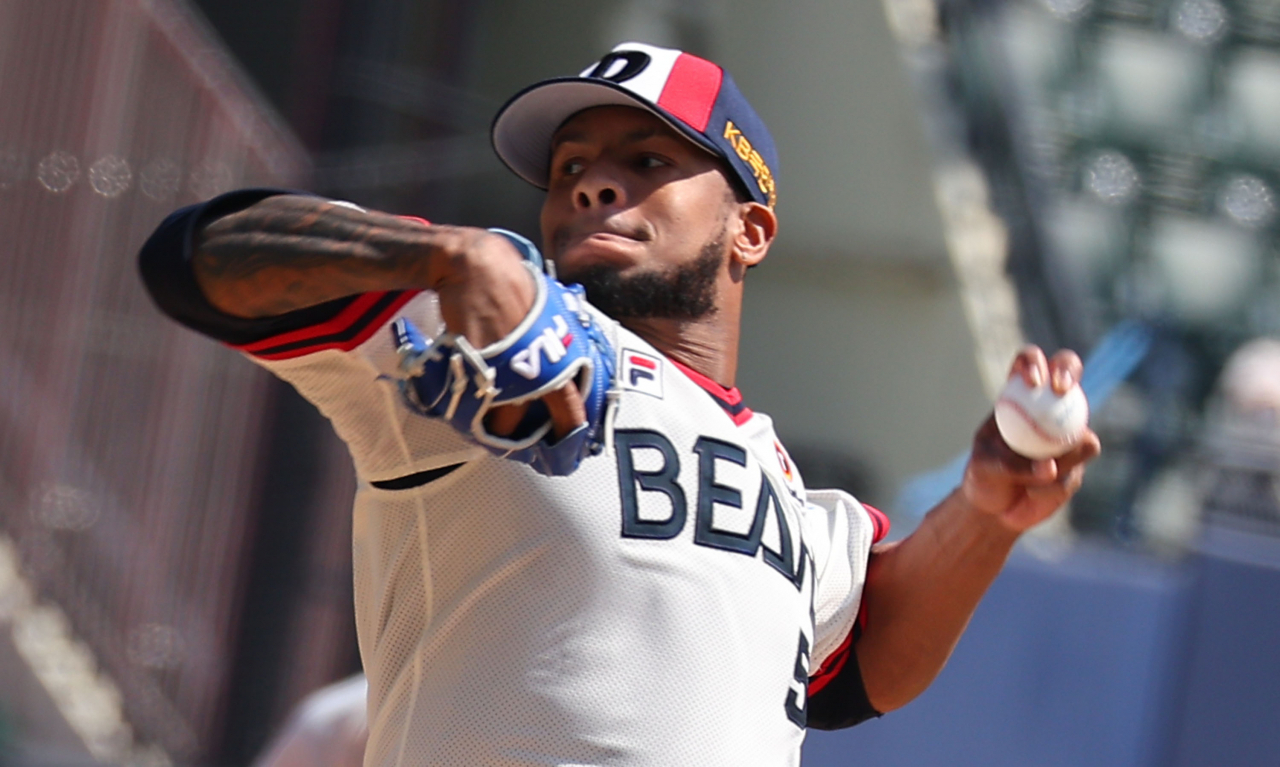 Over the course of a Korea Baseball Organization (KBO) season, teams send players down to the minors all the time, either to have them rehab injuries or to help them get their acts together.

Even established names can't avoid that fate if they get into a protracted slump. But rare is an MVP-winning player who is unceremoniously demoted to the Futures League, the KBO's little brother, in the opening weeks of a season.

Ariel Miranda, the left-handed starter for the Doosan Bears who was voted the league MVP last year, was sent to the minor league before Sunday's game.

The Cuban pitcher missed the start of the season with shoulder discomfort. He only made his season debut on April 17, 15 days after Opening Day. Though Miranda only surrendered one hit in four innings against the Kiwoom Heroes, he walked six batters.

Miranda's next outing came six days later, on Saturday, against the LG Twins. He held them to one hit in three innings, but he once again issued six free passes.

The sample size is admittedly too small for any meaningful conclusion, but walking 12 out of the first 34 batters of the season is far from ideal.

Doosan manager Kim Tae-hyoung said Sunday that Miranda had told him he had no physical issues to speak of. But there are some warning signs in addition to Miranda's wildness.

The manager decided he could no longer wait for Miranda to come around against KBO hitters.

"I was going to give him three starts (at the start of this season) but he is in no condition to pitch at this level," Kim said. "We will have him pitch in the minors and will only bring him back up when he is himself again. If he keeps performing like this here, it's not going to help us at all."

This has been a challenging Year 2 in Korea for Miranda. Following a bout with COVID-19, Miranda only reported to spring training Feb. 25, more than three weeks after the start of camp. He made one appearance during the preseason before hitting the sidelines with shoulder issues.

Last year, Miranda had also missed the late portion of the regular season and the early part of the postseason with shoulder pain.

In nine relief appearances so far this season, Choi has a 1-1 record with a 6.48 ERA in 8 1/3 innings. Choi relieved Miranda on Saturday and earned his first career victory after tossing three shutout innings.

The Bears are in third place at 11-8, 4.5 games back of the league-leading SSG Landers. The Bears have the fourth-lowest ERA at 3.14, but they have walked the second-most batters with 73 in 172 innings. (Yonhap)