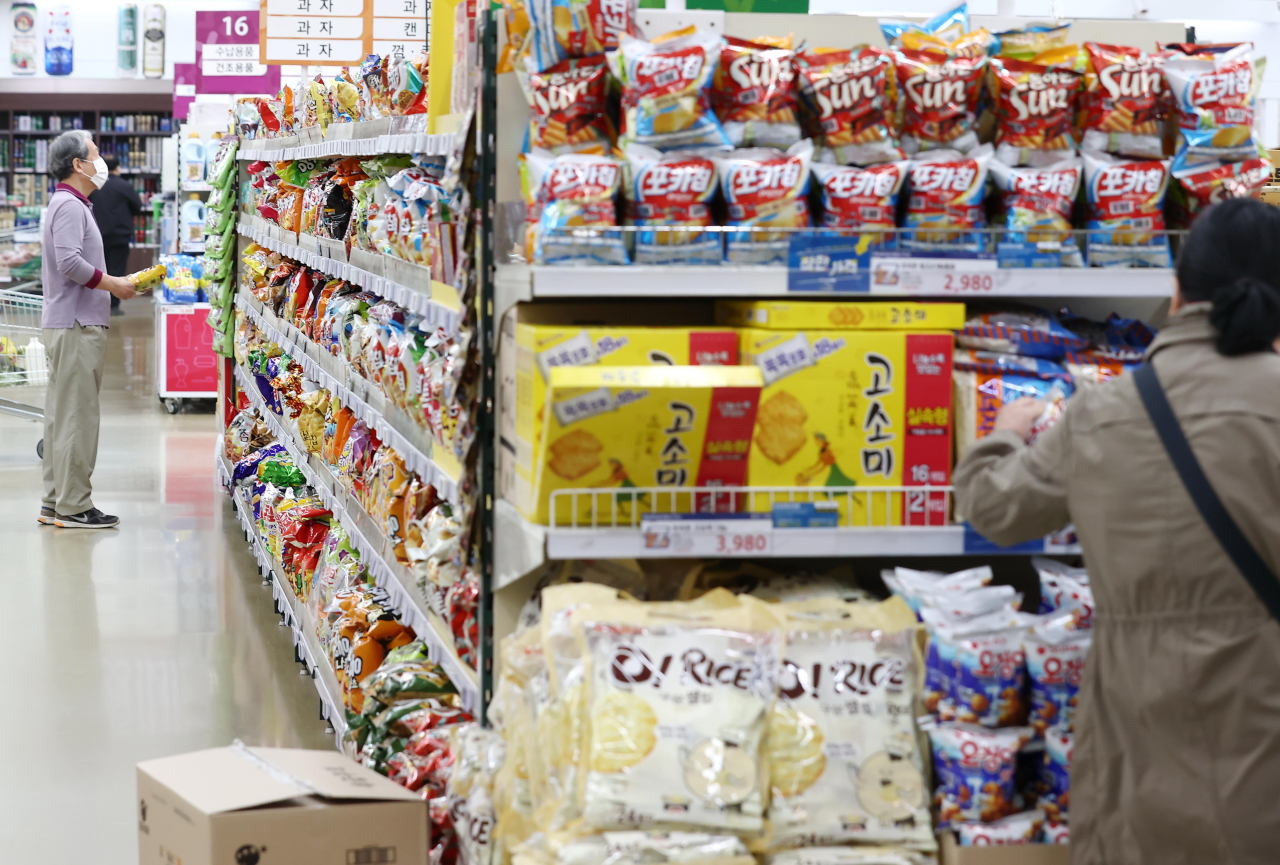 A supermarket in Seoul. (Yonhap)
The International Monetary Fund said inflation in South Korea would hit 4 percent this year, second behind only New Zealand in a list of eight advanced economies in the Asia and Pacific region, in part because of the war in Ukraine.

The projection was made public this month as Asia’s fourth-largest economy is seen as sliding into stagflation, a condition where rising inflation and shrinking economic growth coexist.

In its latest World Economic Outlook, the IMF forecast inflation of 4 percent in Korea, a jump from 1.6 percent from October last year in what is also the second-highest hike in the six-month period after New Zealand, which is expected to see prices jump 5.9 percent this year. Wellington’s October forecast was 2.2 percent.

Forecasts for the US and countries in Europe were 7.7 percent and an average of 5.5 percent, respectively.

Adding to South Korea’s gloomy economic outlook is its growth forecast this year, which the IMF cut this time to 2.5 percent from 3 percent in January.

Finance Minister Hong Nam-ki, who said in December last year the economy would grow 3.1 percent this year, admitted that the growth projection was unreachable at a meeting with foreign correspondents two weeks ago.

Hong, who doubles as deputy prime minister, added the government would have to revise the target once President-elect Yoon Suk-yeol takes office on May 10. Yoon’s office has said the government would tackle inflation while at the same time backing an extra budget to support businesses hit by COVID-19.

The challenge for Yoon’s policymakers would be to maintain growth momentum while taking steps to bring prices down, as the government would increase spending for the stimulus package Yoon had said would be deployed immediately upon his inauguration.

“Price stability is the priority, though we can’t just abandon the stimulus package for COVID-hit businesses. We knew we would be dealing with this kind of dilemma so there’s nothing really new to the problem, which I think is largely coming from outside,” said Sung Tae-yoon, an economics professor at Yonsei University.

He referred to rising fuel and food prices prompted by Russia’s invasion of Ukraine. Customs data shows the costs of oil and coal imports this month jumped 25 percent on-year, offsetting a surge in key exports like chips, in what could be the worst trade deficit for the month of April.

“So the first thing to do is to cool inflation, and that’s why another rate hike is inevitable. It will also prevent capital outflow from here to the US,” Sung said.

The Bank of Korea has already lifted the benchmark rate two times this year, in January and just two weeks ago, to 1.5 percent. The central bank is expected to lift borrowing costs throughout the year in response to potential back-to-back rate hikes by the US Federal Reserve, whose chairman has backed hefty rate increases.