The rallies began at around 7 a.m. at the Gyeongbokgung Station on subway line No.3. and City Hall Station on line No. 2. 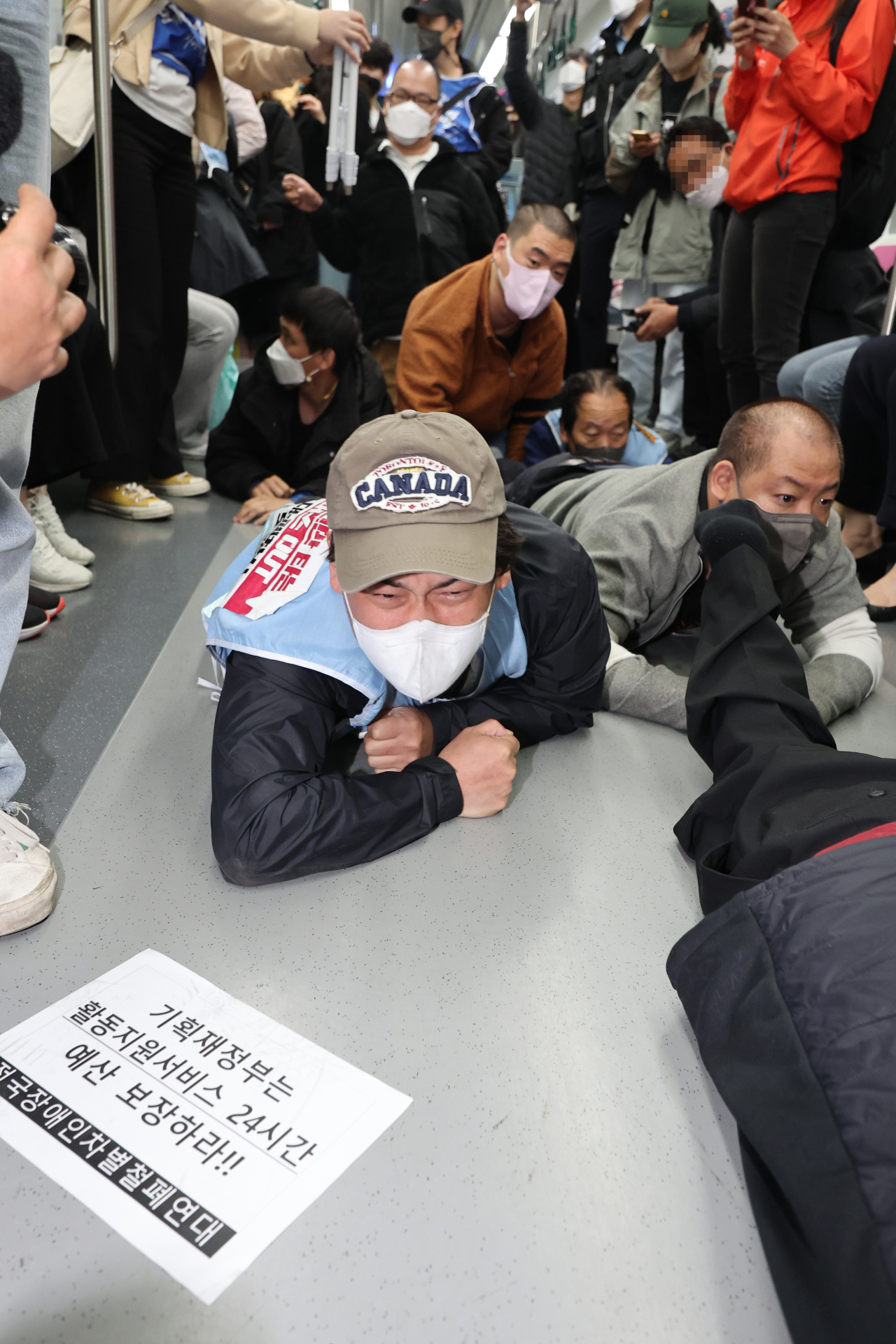 Members of the Solidarity Against Disability Discrimination crawl on the floor of a subway train at City Hall Station on Seoul Metro Line No.2 on Thursday, urging the incoming government to come up with plans to enhance their right to move. (Yonhap) 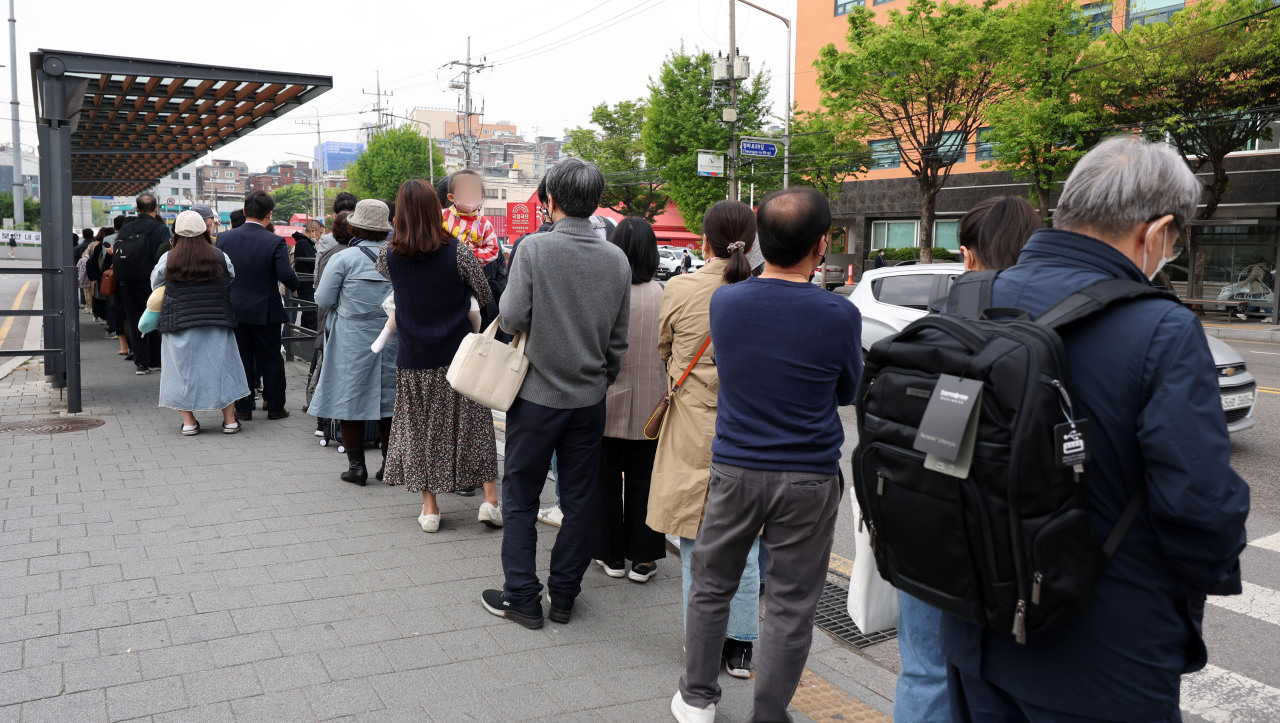 Long lines are seen at a taxi stop near Seoul Station on Thursday morning, as the morning subway commute faced massive disruptions due to protests and a train breakdown. (Yonhap)
Seoul Metro, which operates the affected lines, said the protests caused delays of up to one hour and 12 minutes to subway operations. Police said Thursday they will hold the protestors accountable for the illegal protests and hindering the operation of the trains.

The protesters, many in wheelchairs, are members of the Solidarity Against Disability Discrimination and they demanded the incoming government come up with realistic plans on how to improve their rights to move.

“The presidential transition committee has failed to present any answers (to our calls.) What it said in the press briefing was just rhetoric that has been repeated by previous governments over the past 20 years,” Park Gyeong-suk, the leader of the group, claimed at the rally.

Park, who is wheelchair-bound himself, got on the ground and crawled onto the train in a demonstration of the difficulties disabled people face in using public transportation. Several others crawled along with him.

He and members of the group currently face legal issues concerning last year’s protests, when they delayed operations of Seoul buses and subway trains multiple times. 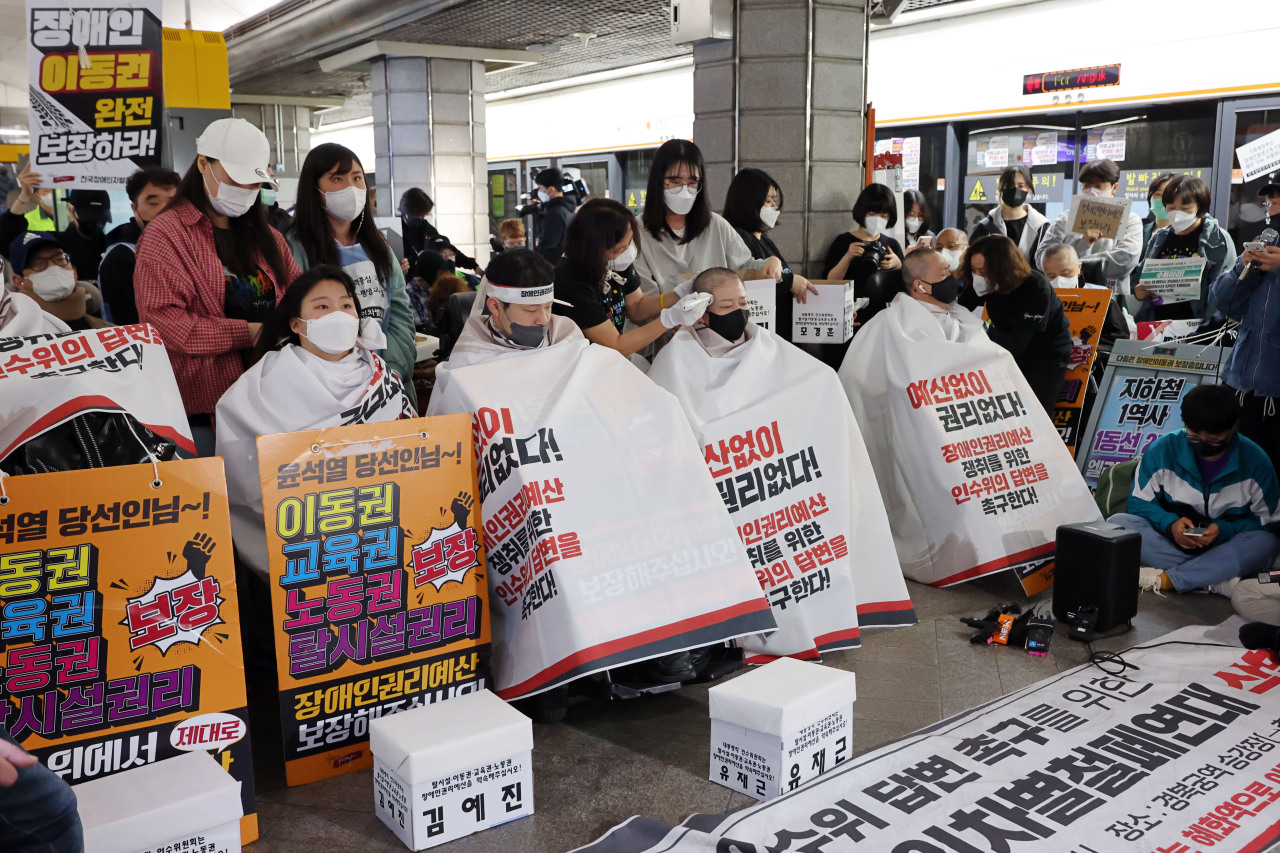 Disability rights activits shave their heads on a platform at a Gyeongbokgung Station on subway line No.3. as part of their protest against the government‘s inaction to guarantee their right to move. (Yonhap)
The group temporarily had ceased subway protests after meeting with the transition committee on March 29. Having resumed collective action Thursday, it now plans to continue the demonstrations, with another slated to take place at Gyeongbukgung Station on Friday. 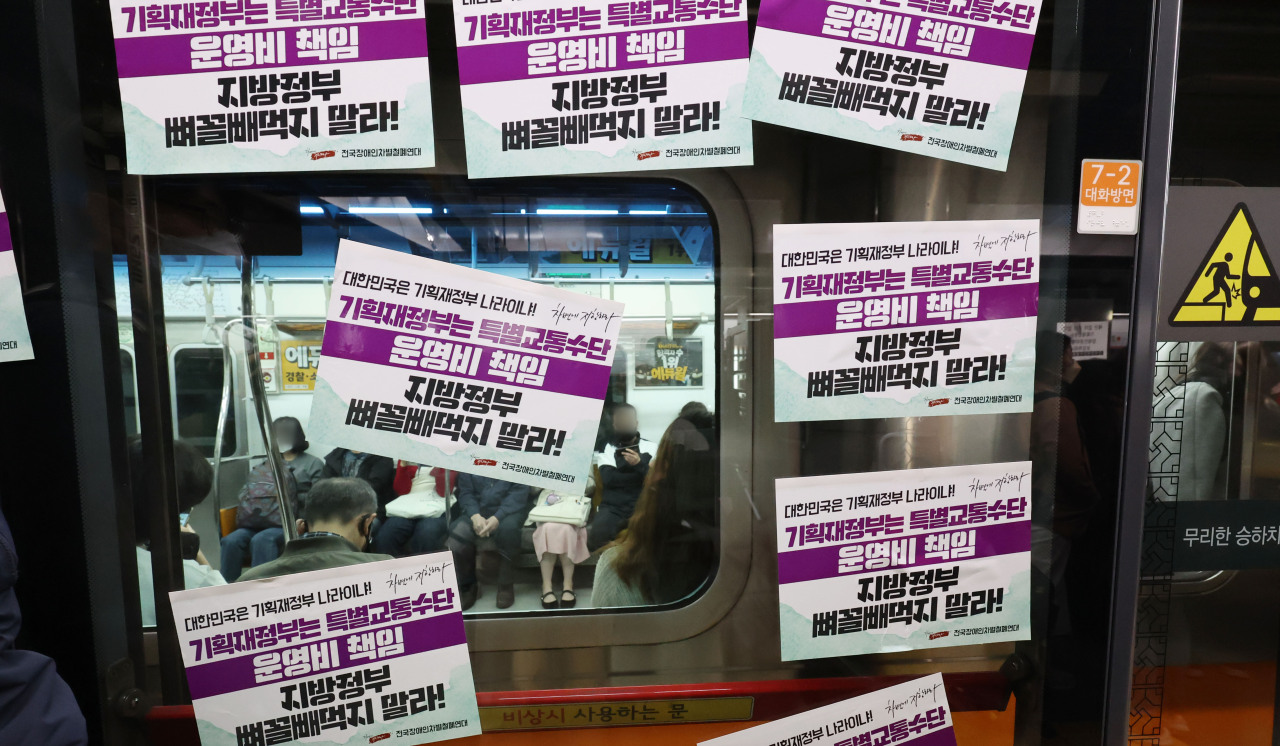 Stickers are seen on the exterior of a subway train car that read “The cost of operating special transport services is the responsibility of Finance Ministry” at Gyeongbokgung Station on subway line No.3. on Thursday. (Yonhap)
In an unrelated development, commuters on subway line No.4 also faced a major disruption to service, when three north-bound trains passing between Seonbawi Station and Geumjeong Station -- between which there are seven stations -- experienced a sudden power outage at around 6:22 a.m. The trains moved to adjacent stations to drop off the passengers, and were on standby until the operation resumed more than three hours later, at around 9:41 a.m.