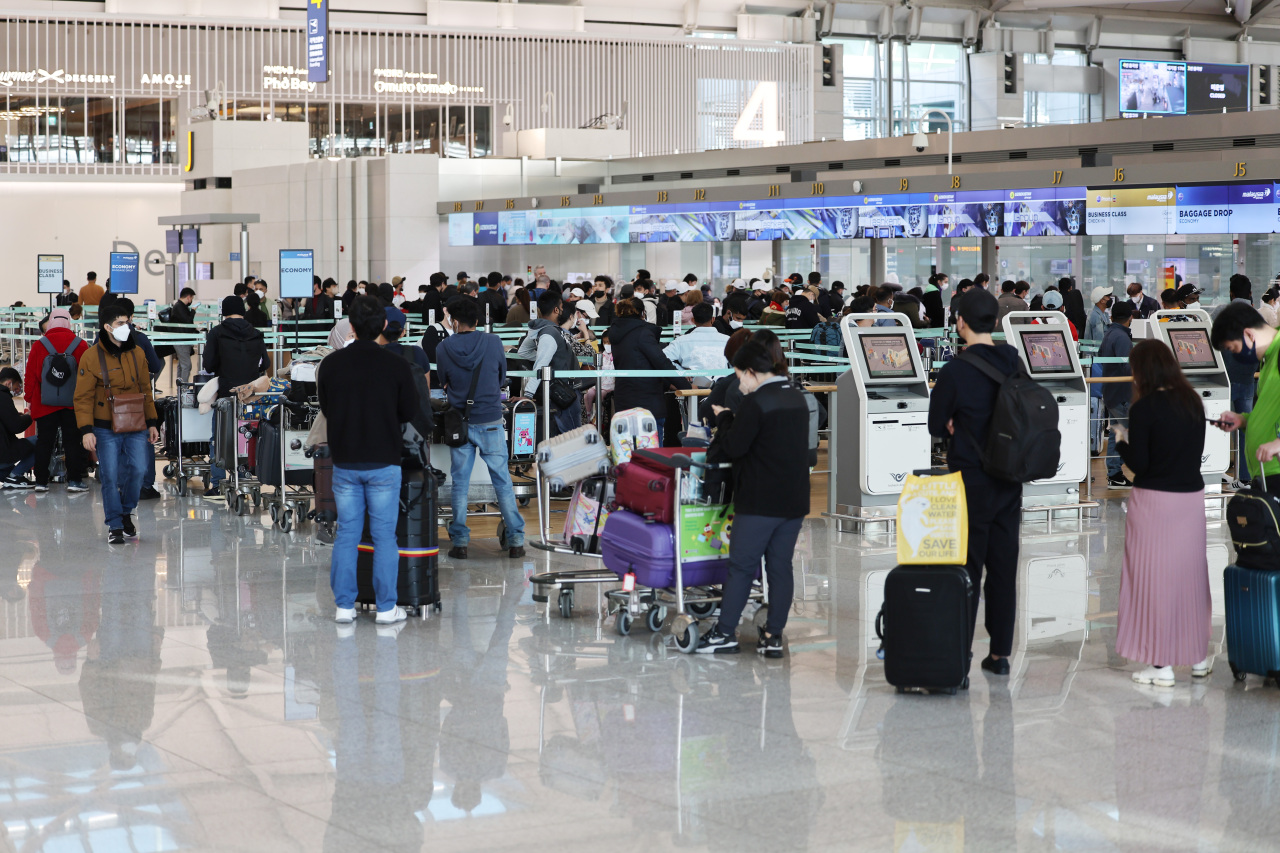 The cost of air travel is rising, with more upward pressure building from high jet fuel prices and soaring tourism demand. If you are fixed on an overseas vacation, don’t wait too long to book it, experts say.

“Airlines are selling their flight tickets well and there is a supply shortage. We are in a situation where prices are forced to go up,” an Asiana Airlines official told The Korea Herald.

“The number of flights in operation has not returned to pre-pandemic levels. But with the mandatory quarantine lifted, people can now travel like pre-pandemic.”

“Many travelers, however, have still managed to book a flight to Europe for less than 1 million won ($810) by booking in advance.”

“The best way to travel cheaper now is to book tickets in advance,” the official said.

Revenge travel is on

The omicron variant is ebbing and South Korea has lifted most coronavirus restrictions, including mandatory quarantine for international arrivals.

In tandem with the easing mood, the popularity of the term “international travel” in web searches has been steadily rising, according to Google Trends.

In online travel communities, people are sharing their travel plans in the coming months.

“I’ll be off to Europe in early May for six weeks,” one post on Naver reads. “Please recommend me destinations for a solo traveler for early May,” another reads.

Yim Hea-jin, a 28-year-old woman from Seoul, said she is eager to travel abroad after two years of the pandemic.

As supply fails to meet demand, cheaper flight tickets are getting sold rapidly.

According to e-commerce platforms Gmarket and Auction, sales of international flight tickets jumped nearly ninefold in a month’s space following the March 11 announcement on the lifting of the mandatory seven-day quarantine for the fully vaccinated.

Demand for long-haul flights also grew as Cambodia, Los Angeles, Hawaii and Bangkok were among the most popular destinations, the company’s data showed.

The number of passengers for international flights at Incheon Airport in March more than doubled from 183,515 in 2021 to 410,706 this year, government data showed.

Earlier this month, the Transport Ministry announced plans to gradually raise the scale of operation of flights with the goal of returning to 50 percent of pre-pandemic levels by the end of this year.

For now, 10 or fewer international flights per hour are operating at Incheon Airport. The ministry estimates the operation of flights has been scaled back to just 8.9 percent compared to pre-pandemic levels.

Starting from May, a further 100 flights per week are expected to be added every month. But the impact has yet to be felt in the industry as the recovery of supply has been slow.

When this reporter checked Thursday, one direct, round-trip flight on Korean Air between Incheon and London in May started at 2.6 million won on Skyscanner.

A nonstop, return flight with Asiana Airlines between Incheon and Bangkok next month meanwhile started at 869,500 won.

South Korean low-cost carrier T’way Air is offering flights to Bangkok at a promotional price starting from 295,930 won. In 2019, the price of the flights for the same route started from 107,120 won.

Despite the easing of virus cases and travel restrictions in the country, uncertainty surrounding the pandemic and the chances of a new variant remain.

Against this backdrop, some travelers remain cautious.

Kim Young-tae, a soon-to-be groom from Seoul, is planning a honeymoon trip to Paris with his partner. But he will not book ahead of time.

“Travel policy changes so frequently in this age so I’ll only book a flight near my trip. As I haven’t been able to get on a plane in the wake of omicron in the past, I’m too worried about a new variant appearing to purchase a ticket now.

Asiana Airlines, the country’s second-largest airline, is set to resume flights to Rome and Paris in June after suspending them for 27 months due to COVID-19.

Low-cost carrier Air Seoul also announced earlier this month it would resume flights to Danang and Nha Trang in Vietnam, alongside the US islands of Saipan and Guam. Flights to the four popular tourist destinations are to be resumed after nearly two years, the airline said.

Bonbon, a Thai national in Bangkok who plans to travel to South Korea this year, still has reservations about the trip, given the number of cases in the country.

“I’m still mostly worried about COVID cases in South Korea, even though I’m fully vaccinated and contracted the virus once already.

“In the worst-case scenario, if I catch it there as a foreigner, I have no clue about all the treatment processes I’m supposed to take.”

Planning a trip to Europe in December, Kim Sun-mi is also hesitant to make reservations.

“My daughter is graduating from elementary school in December and the trip would be her graduation gift.

“But I am not sure if it’s going to be safe to travel then. Who knows, a new variant could rage again in winter.”