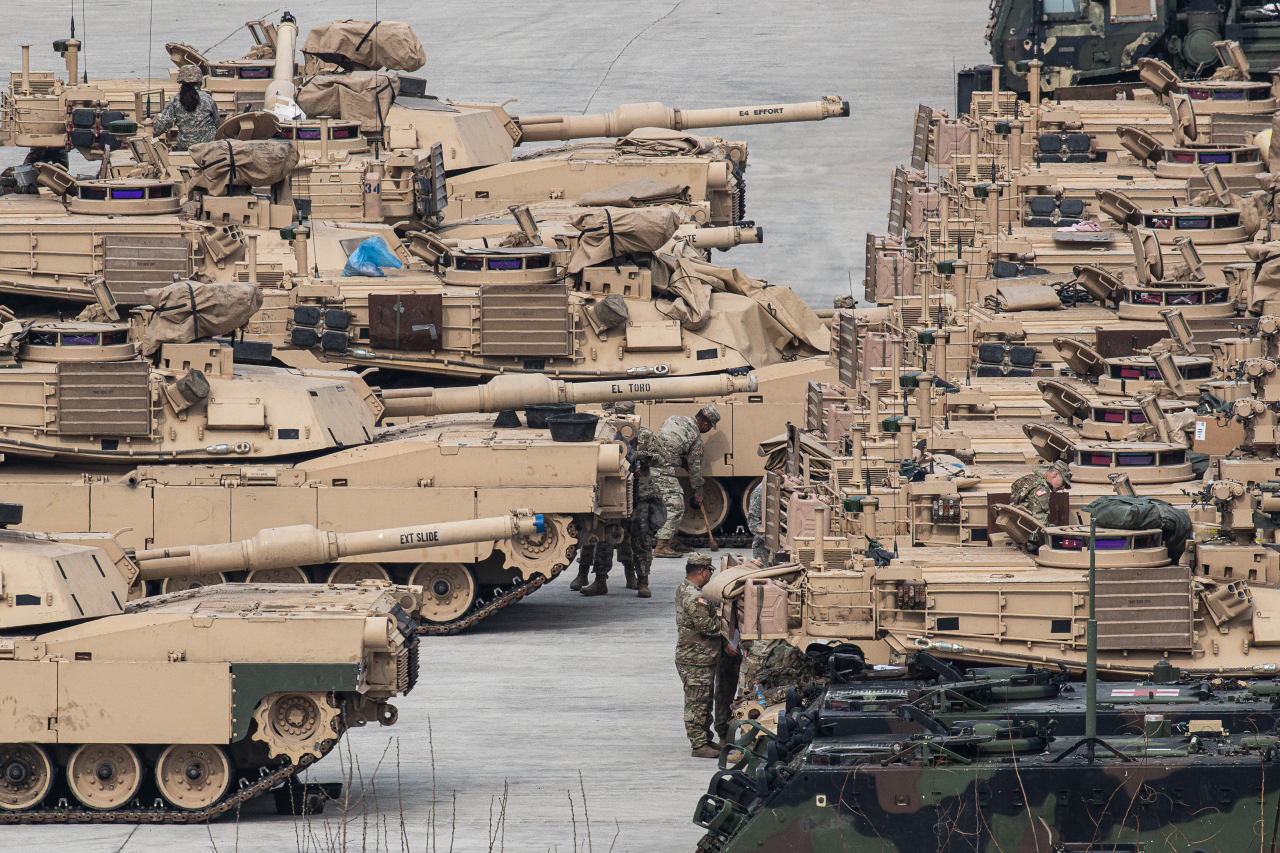 Soldiers check tanks at a US military base in Dongducheon, 40 km north of Seoul on Monday, as South Korea and the United States kicked off their major springtime combined training that will take the form of a command-post drill through April 28. (Yonhap)
South Korea and the US on Monday kicked off their annual combined military exercise, while North Korea has begun its preparation for a massive military parade likely to be held during the training period “in earnest,” South Korean military officials said.

Seoul and Washington decided to conduct the nine-day, springtime Combined Command Post Training in light of the overall circumstances, including the COVID-19 pandemic and maintaining a combined defense posture.

“The training aims to enhance the combined operational capabilities of South Korean and US soldiers and will serve as an opportunity to further strengthen our combined defense posture,” South Korea’s Joint Chiefs of Staff said in a written statement.

This is the last South Korea-US military exercise to be conducted under the Moon Jae-in government. But both sides reportedly will not conduct an assessment of the South Korean military’s Full Operational Capability required to transfer wartime operational control to South Korea.

The South Korean and US defense chiefs last December agreed to proceed with the long-postponed FOC assessment during this year’s Combined Command Post Training.

But the Moon Jae-in government had hoped to advance the timing of the assessment, which is the second part of the three-phase system to evaluate the South Korean military’s capabilities to command the future combined defense system.

During the period, the US nuclear-powered aircraft USS Abraham Lincoln operated in the international waters of the East Sea and conducted bilateral exercises with the Japan Maritime Self-Defense Force.

The operation of the USS Abraham Lincoln, which can accommodate around 80 aircraft, in the waters between South Korea and Japan came after more than a four-year hiatus. The last time any US nuclear-powered aircraft carrier operated near the east of the Korean Peninsula was in November 2017.

North Korea’s external-oriented media outlets have recently ratcheted up their bellicose rhetoric specifically against South Korea, denouncing the beginning of South Korea-US combined military exercise and the deployment of the USS Abraham Lincoln.

Tongil Voice, a propaganda radio broadcast targeting the South Korean audience, on Monday criticized that “such behaviors of the South Korean warmongers are reckless provocations that prepare for the war of aggression.”

The media outlet reiterated that South Korea will not be a target of attack unless the South Korean military takes military action against them, echoing the recent statement issued by North Korean leader Kim Jong-un’s powerful sister Kim Yo-jong.

Tongil Voice said the South Korean military should not choose military confrontation against the “nuclear-weapons state,” warning of “merciless punishment.”

North Korea’s state-run website Uriminzokkiri on Sunday repeated its rhetoric that the annual military drills are “war rehearsals and nuclear war exercises to further fully prepare to implement the operational plan aimed at launching a preemptive strike” against the country.

Uriminzokkiri warned that a “minor accidental skirmish” could lead to “all-out war” at a time when the “situation on the Korean Peninsula has worsened due to the reckless words and actions” of the South Korean military.

“The aggressors … who have been pushing the situation to the extreme pitch (of tension) by clinging to the dangerous saber-rattling will surely pay a dear price,” Uriminzokkiri said in a Korean-language column. “Those who enjoy fire will be bound to be burned to death.”

North Korea has been gearing up for the military parade, which will likely be held to mark the 90th anniversary of the founding of the Korean People’s Revolutionary Army on April 25.

The South Korean military forecasts that Pyongyang will show off numerous weaponry systems and mobilize up to “20,000 personnel” at the military parade.

Military equipment including aircraft, armored vehicles, tanks, tracked military vehicles and transporter erector launchers, as well as thousands of personnel have been visible at the Mirim Parade Training Ground, according to the source.