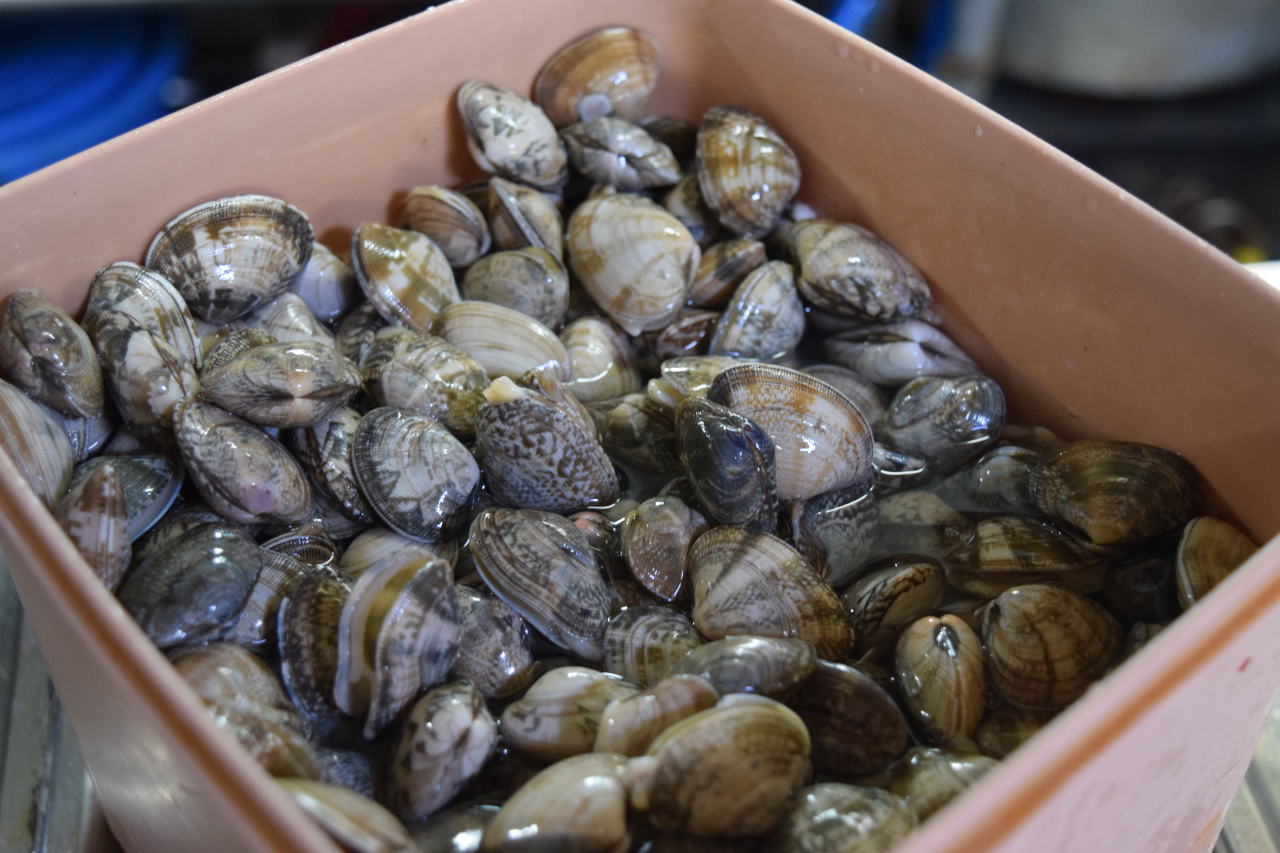 A container is filled with fresh bajirak. (Kim Hae-yeon/The Korea Herald)
When Koreans think of clams, bajirak will most likely be the first thing that comes to mind.

The most popular and widely used littleneck clams in Korea, bajirak can be boiled, steamed or stir-fried.

After the very first sip of hot bajirak broth, Koreans often exclaim, “siwonhada!” savoring the clean flavor of the sea with the soul-clearing, refreshing taste.

While bajirak is available year-round, the best time of the year to taste their chewy, succulent meat is from spring to early summer, before the spawning season, when bajirak are fattened to their fullest.

The versatile shellfish is also packed with nutrients, including iron, taurine and methionine. It is said to be helpful in the prevention of anemia and cardiovascular diseases, to break down fat and to help recover from fatigue. The methionine component, in particular, also helps the building of muscles and helping to synthesize proteins.

Recorded as an invaluable ingredient in “Dongui Bogam,” a medical textbook written in 1613, clams are used in countless dishes of Korean cuisine for their flavor as well as their nutritional properties.

Following are three spots in Seoul where you can taste a variety of bajirak dishes. 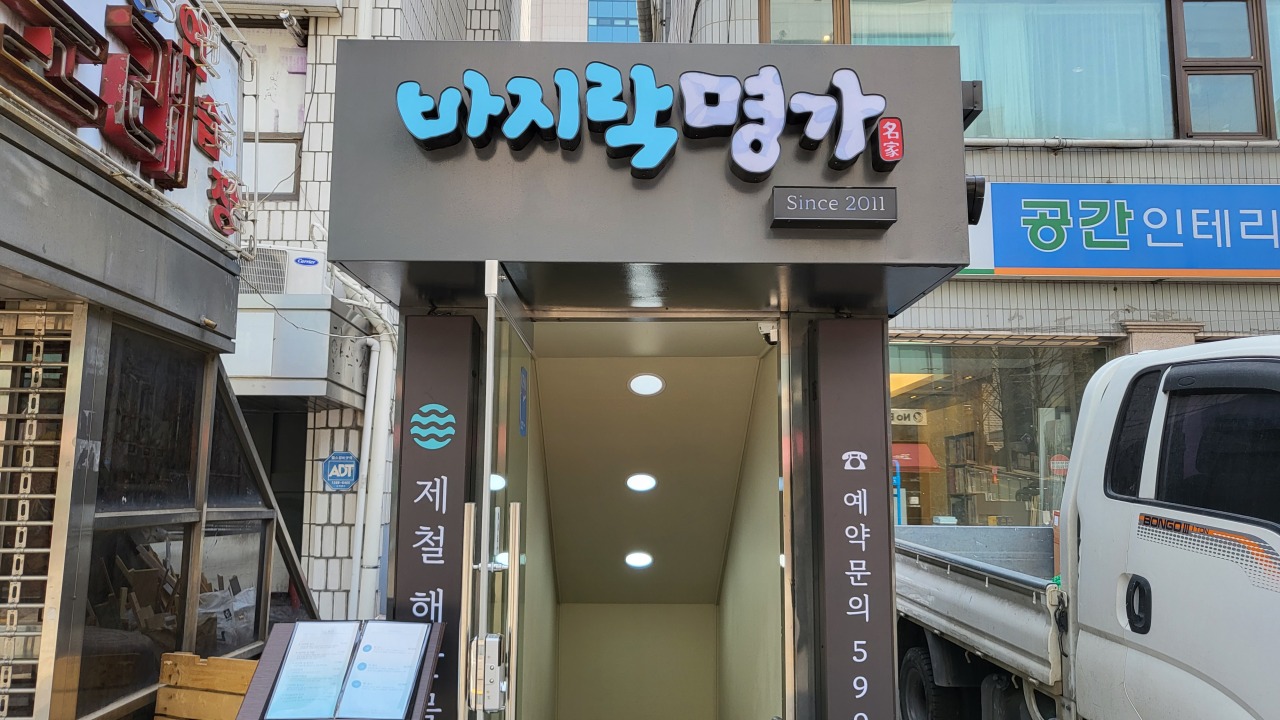 Bajirak Myeonga, a restaurant that specializes in bajirak dishes, located in Seocho-gu, southern Seoul (Kim Hae-yeon/The Korea Herald)
Bajirak Myeonga, just a minute’s walk from Seoul National University of Education Station Exit No. 4, is a must-go if you want to try different bajirak dishes all in one place.

The soup has a thick, milky texture with only bajirak meat.

“No matter how fresh, bajirak meat inevitably gets tough when cooked for a long time. So we prepare it every morning,” the restaurant manager said. The secret to the unique texture of bajirak gaengguk is the rice flour water, which the manager declined to explain in greater detail. 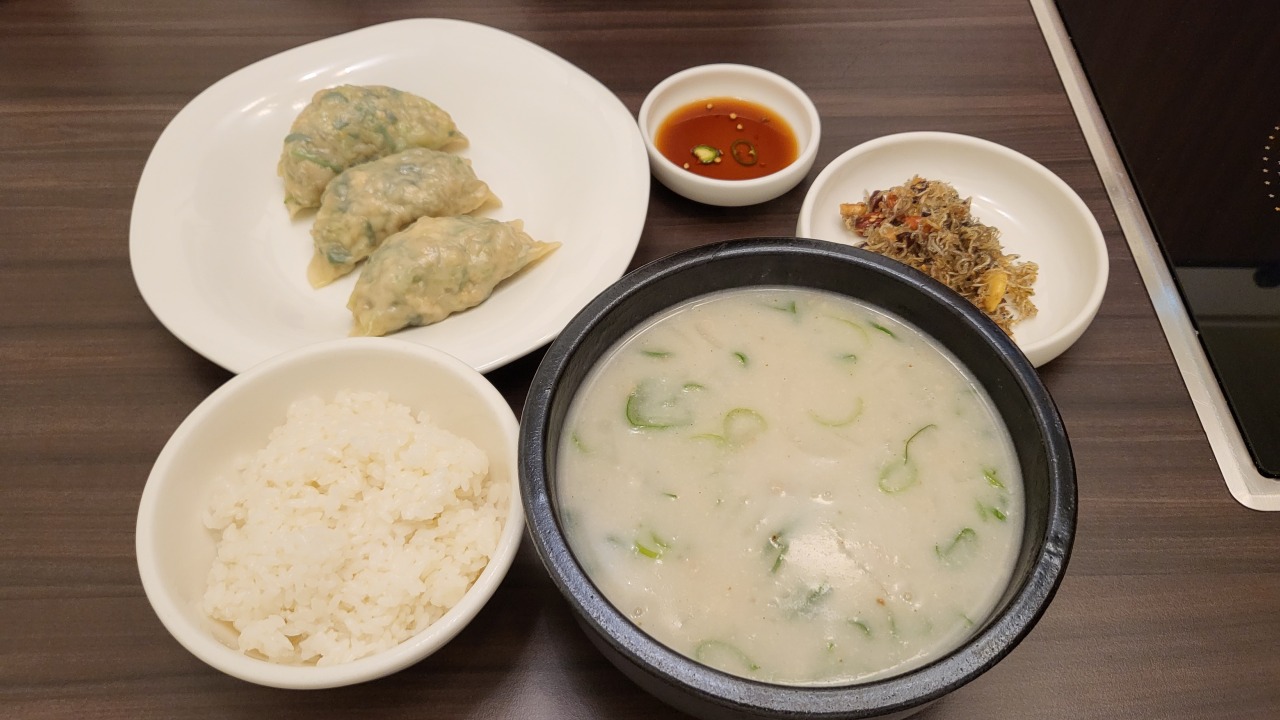 Sooninae Bajirak Kalguksu is the place to head to for an authentic bowl of hand-cut noodle soup with bajirak, or bajirak kalguksu, perhaps the best known of all bajirak dishes. 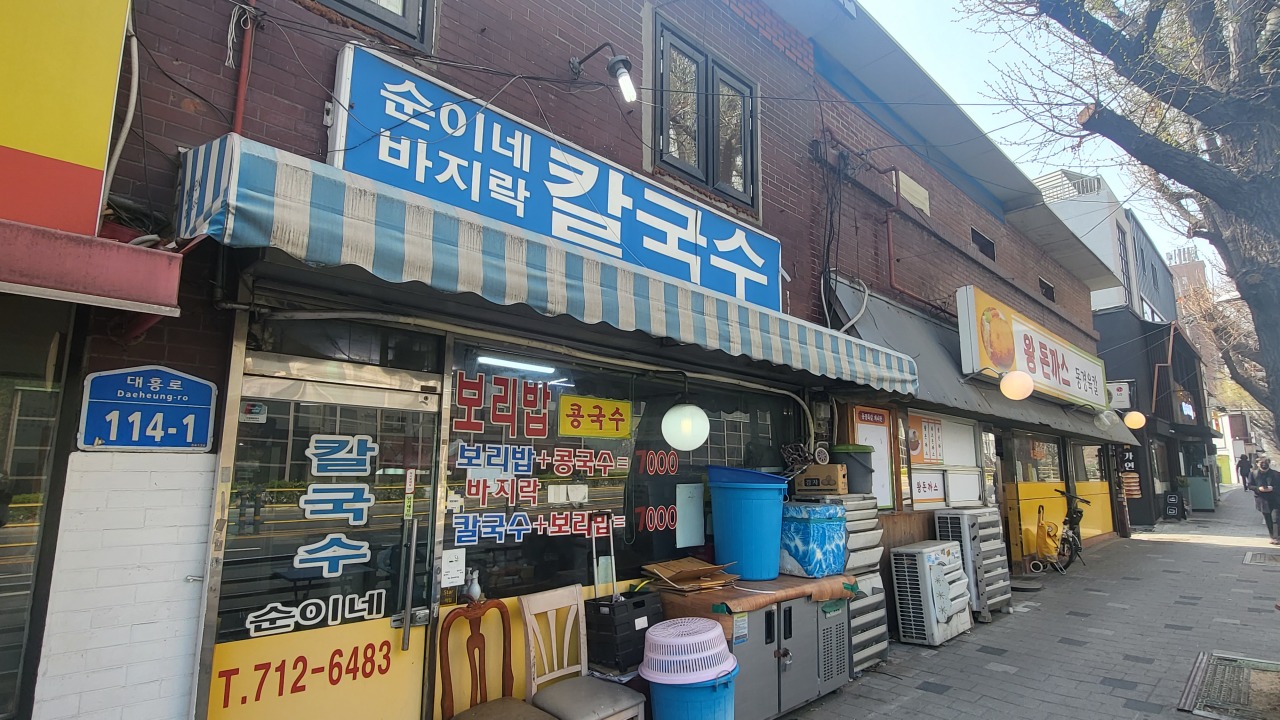 The clean taste of bajirak broth is refreshing, while the kalguksu noodles and thinly sliced zucchini are permeated with a hint of bajirak scent, neither salty nor bland.

“Clams in the West Sea are blackish and rough on the surface, while those from the East Sea are bright and transparent in comparison. We pick West Sea clams at the fish market, which I personally think have a deeper taste,” the restaurant owner, who declined to give her name, said. “It is a good clam if the shell is shiny and not broken. When you smell it, there is a little bit of fishiness but not too much, and that is the best kind.” 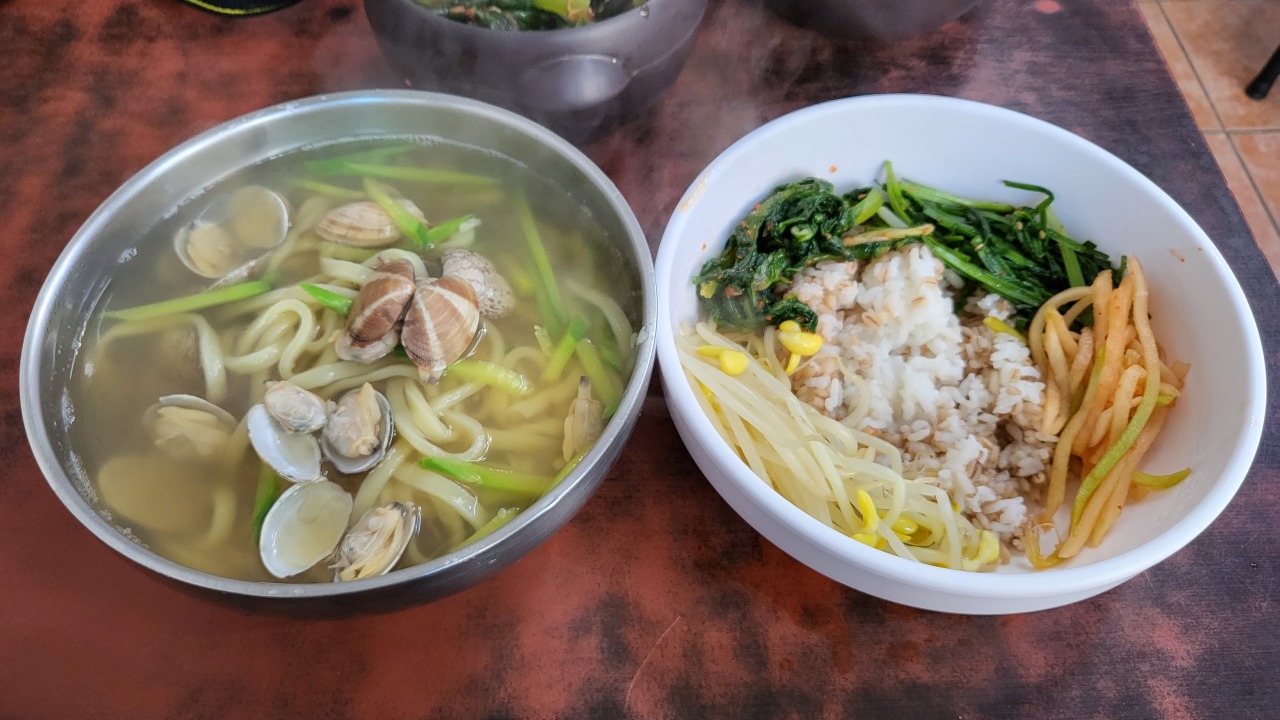 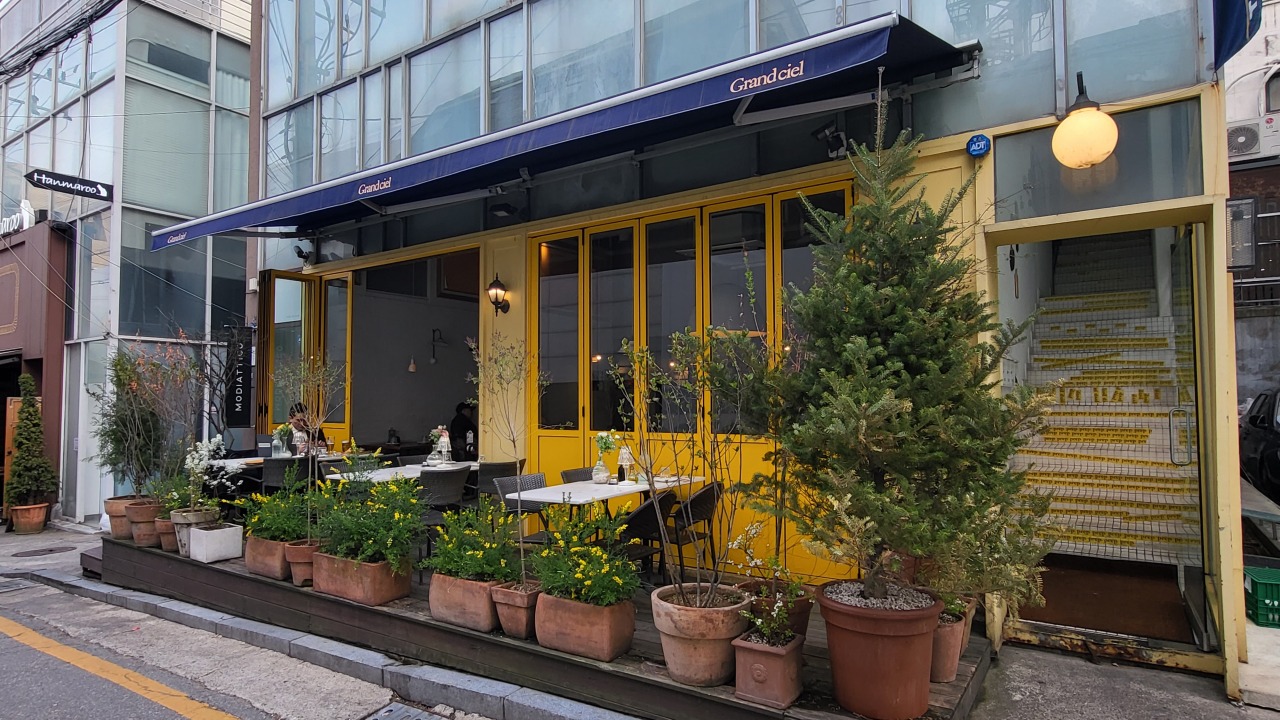 Vongola verace, also known as cross-cut carpet shell clam, is typically used in making vongole pasta. But in Korea, the easy-to-source bajirak is used in its place.

“Gukmul vongole, or spaghetti alla zuppa vongole, is very popular as it goes well with the complimentary toasted breadsticks that can be dipped into the broth. I think our vongole pasta proves that the taste of bajirak fits well with most other dishes,” the restaurant’s serving manager said. 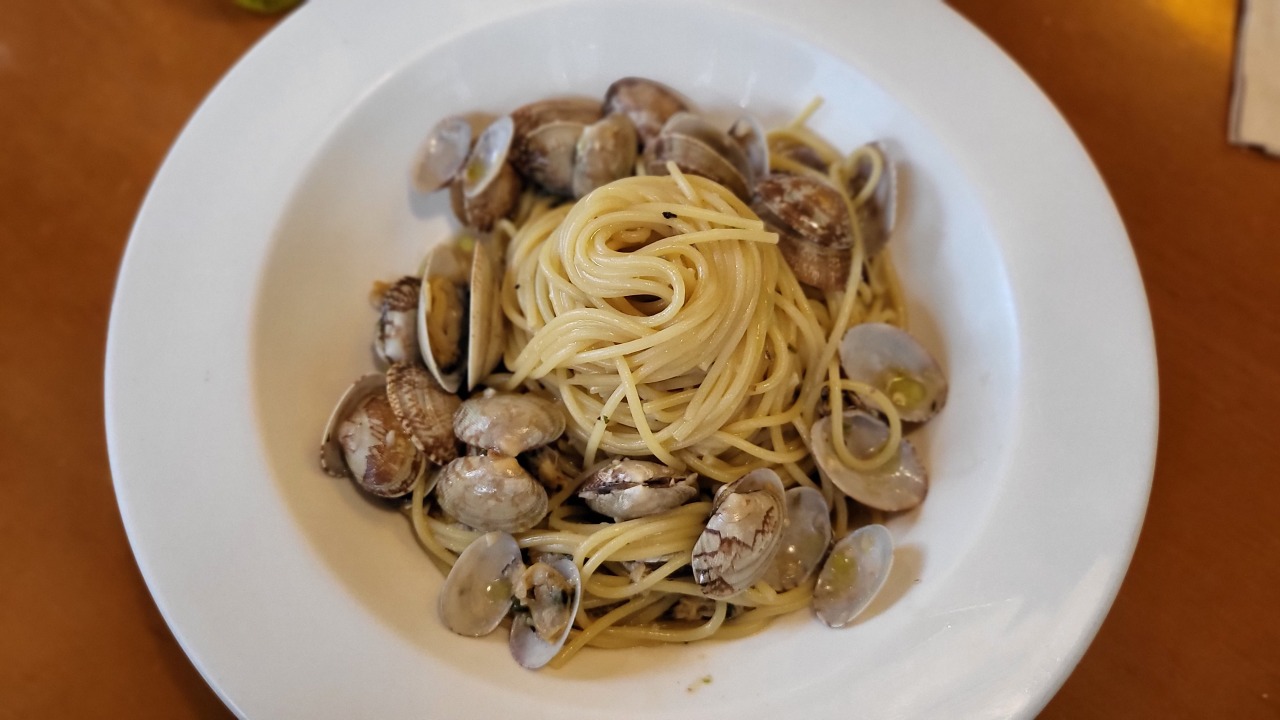