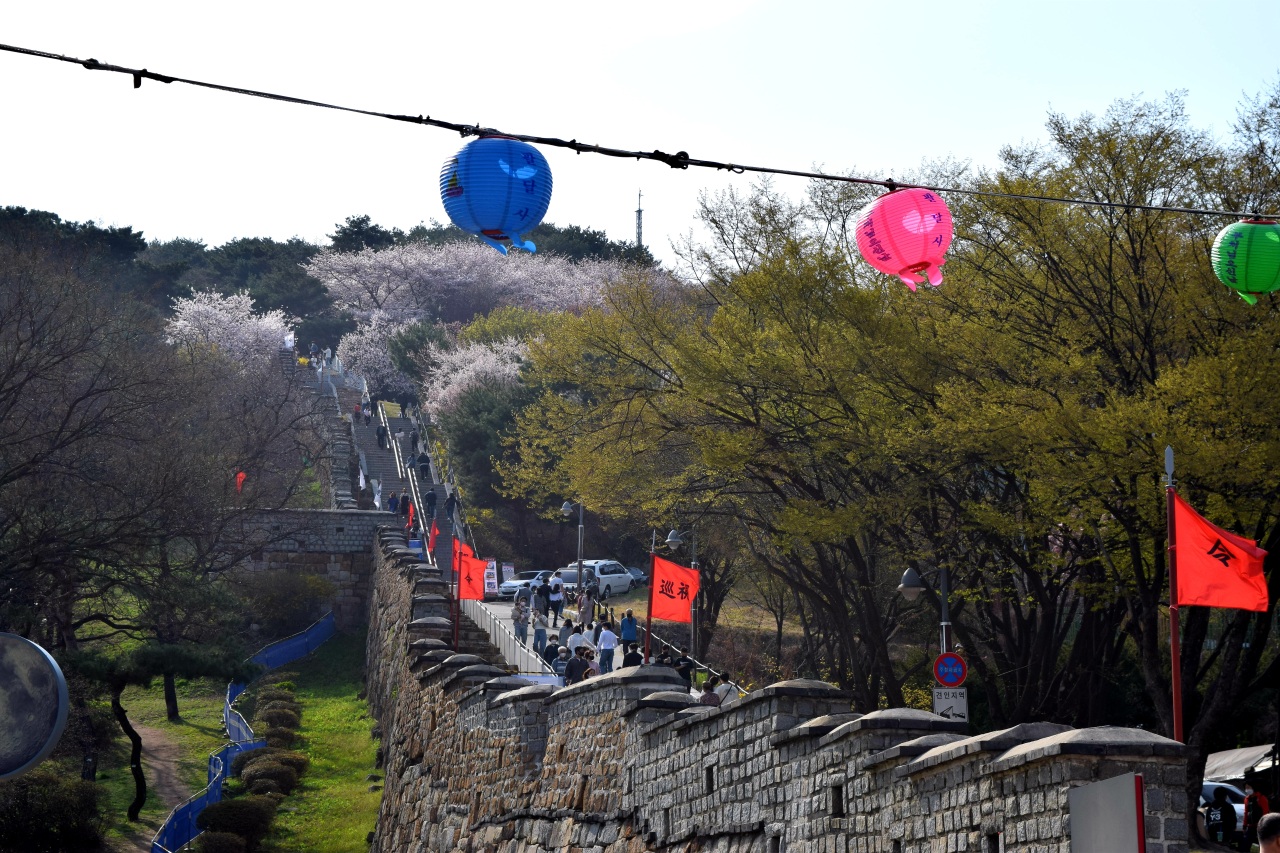 Visitors walk along the wall of the Suwon Hwaseong fortress that leads to the mountain Paldalsan, in Suwon, Gyeonggi Province. (Kim Hae-yeon/The Korea Herald)
The season of buoyant spirits is here, and many are rushing to enjoy the brief window of when spring flowers are in full bloom.

But along the trails of flowers and lush trees are remnants of Korea’s valuable history often too easily forgotten.

Some 30 kilometers south from central Seoul, approximately an hourlong drive, lies Suwon, the most populous city of Gyeonggi Province.

A major destination for spring picnics, Suwon is filled with crowds of families and couples on dates, especially on the weekends.

Known for its shifting roles and forms throughout history, the city which had once served as a giant fortress is now a major industrial research hub, home to the Samsung Electronics headquarters.

Suwon’s name has changed multiple times as well. Before the city took its current name in 1413 during the reign of King Taejong, a Joseon king, it was called Suju in the Goryeo era, and Suseong-gun, during the Unified Silla period.

Following are some of the most popular sites in Suwon. 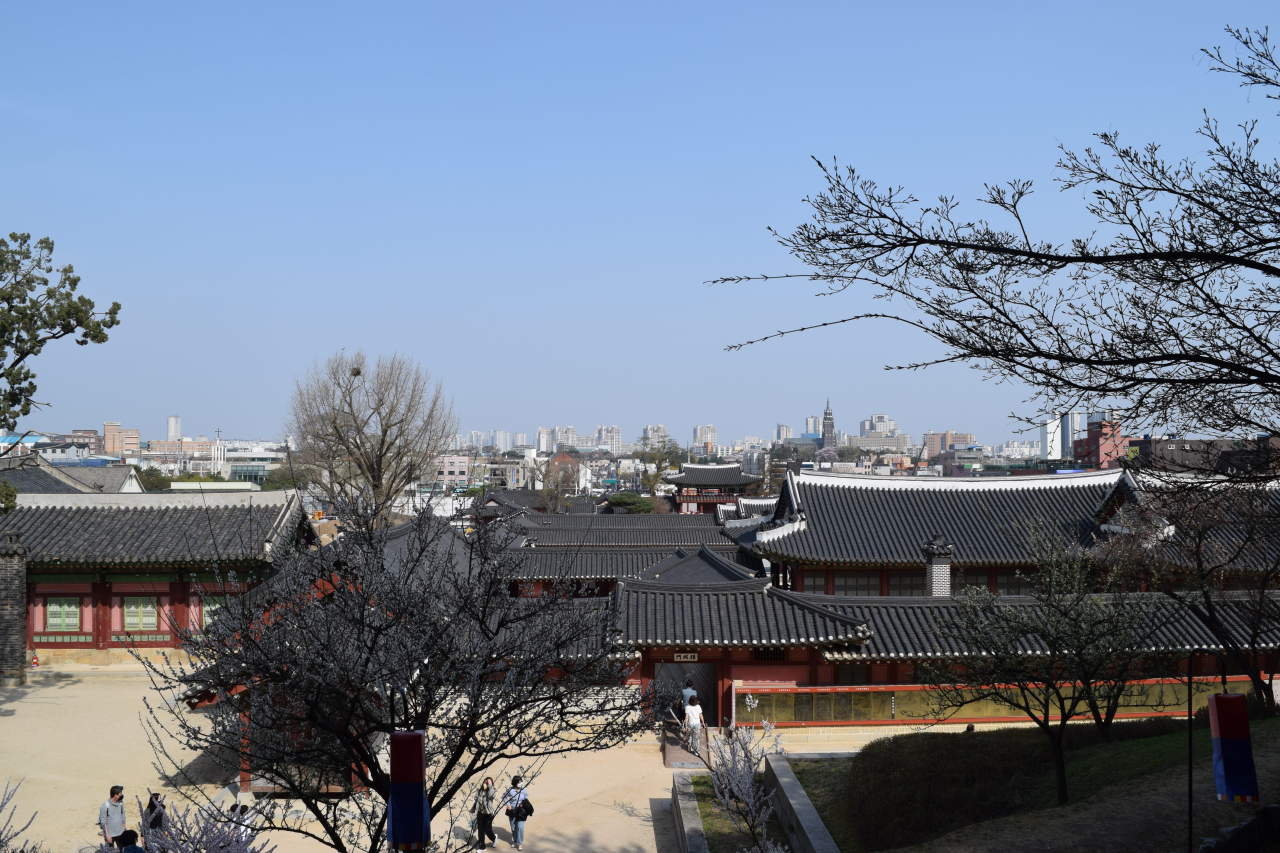 The fortress was made for defense purposes at the end of the 18th century by King Jeongjo.

Crown Prince Sado, King Jeongjo’s father, starved to death in a rice box in 1762 on orders of his father, King Yeongjo.

In 1789, King Jeongjo relocated his father’s remains to Suwon and built a 5.7-kilometer-long wall that reached 5 to 6 meters in height, to protect the tomb.

Since the fortress covers a vast area, visitors can hop on a red tourist trolley to reach the main gates or to visit the Suwon Hwaseong Museum, which houses architectural plans from the period. 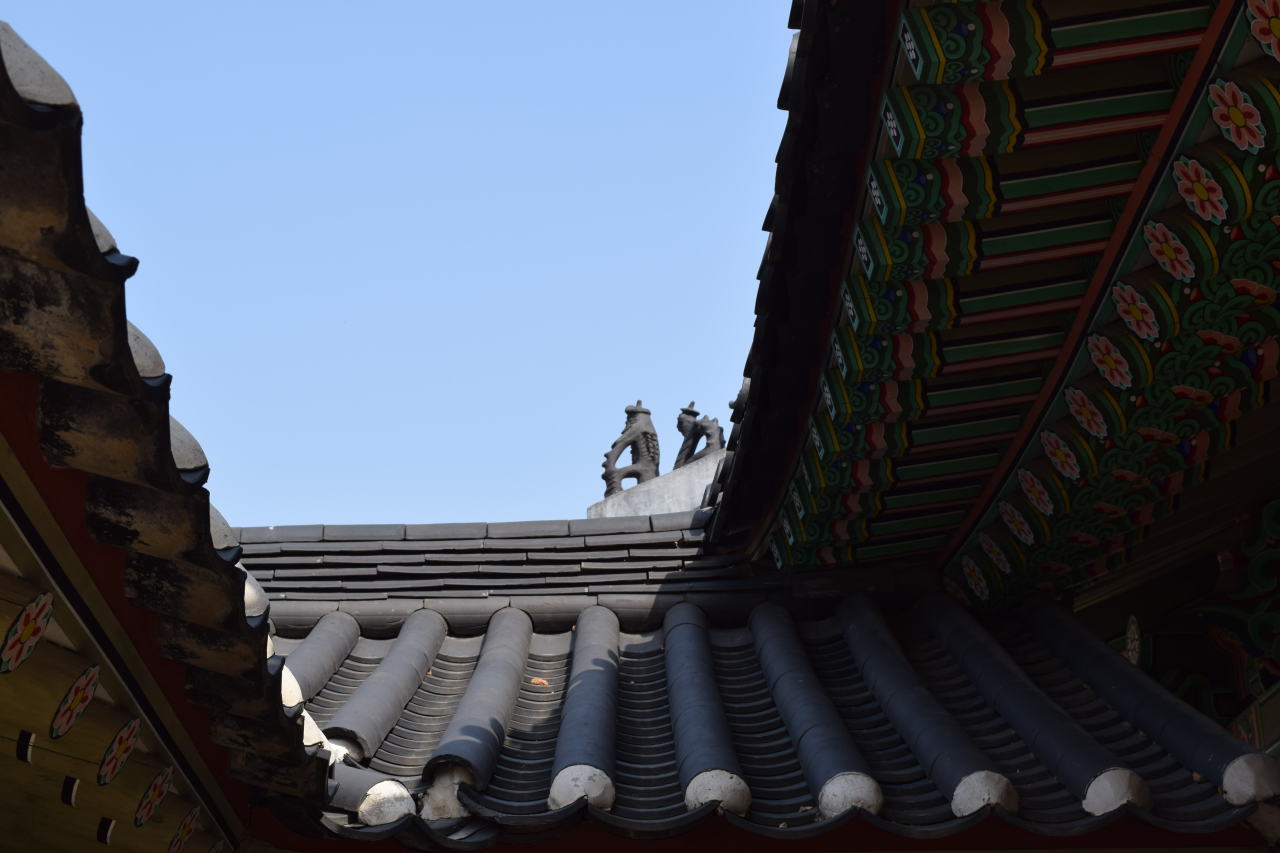 Gargoyles are placed on the roofs of the Hwaseong Haenggung to spiritually protect and guard the palace. (Kim Hae-yeon/ The Korea Herald)
Haengnidangil 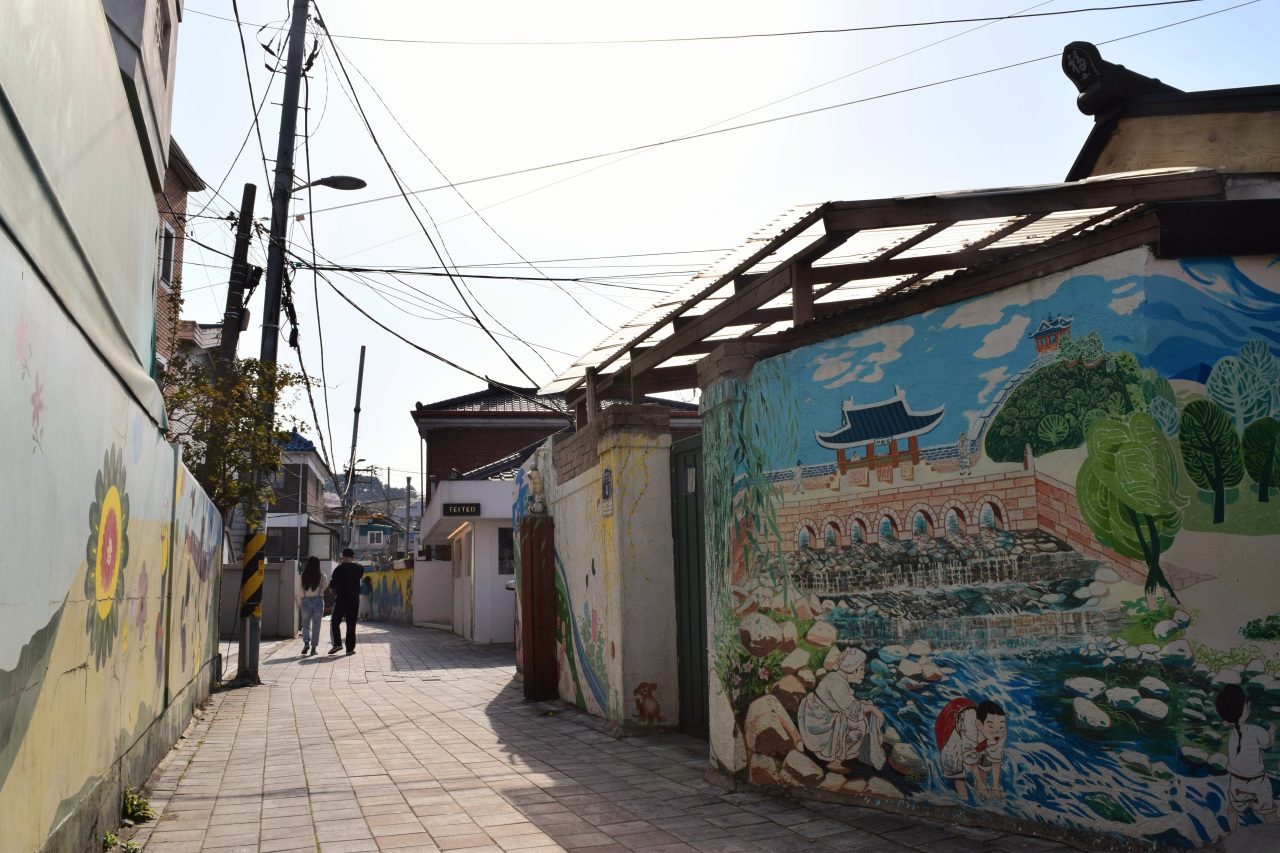 Haengnidangil located a few blocks from Hwaseong Haenggung (Kim Hae-yeon/ The Korea Herald)
A five-minute walk from the Hwaseong Haenggung palace, one cannot miss the bustling narrow streets filled with people in their teens and 20s.

Haengnidangil is lined with antique and crafts shops, candy stores with dalgona treats and desserts as well as selfie zones with colorful murals.

Since there are no parking lots in the area, be sure to find a space at the public parking zones nearby before visiting the neighborhood. 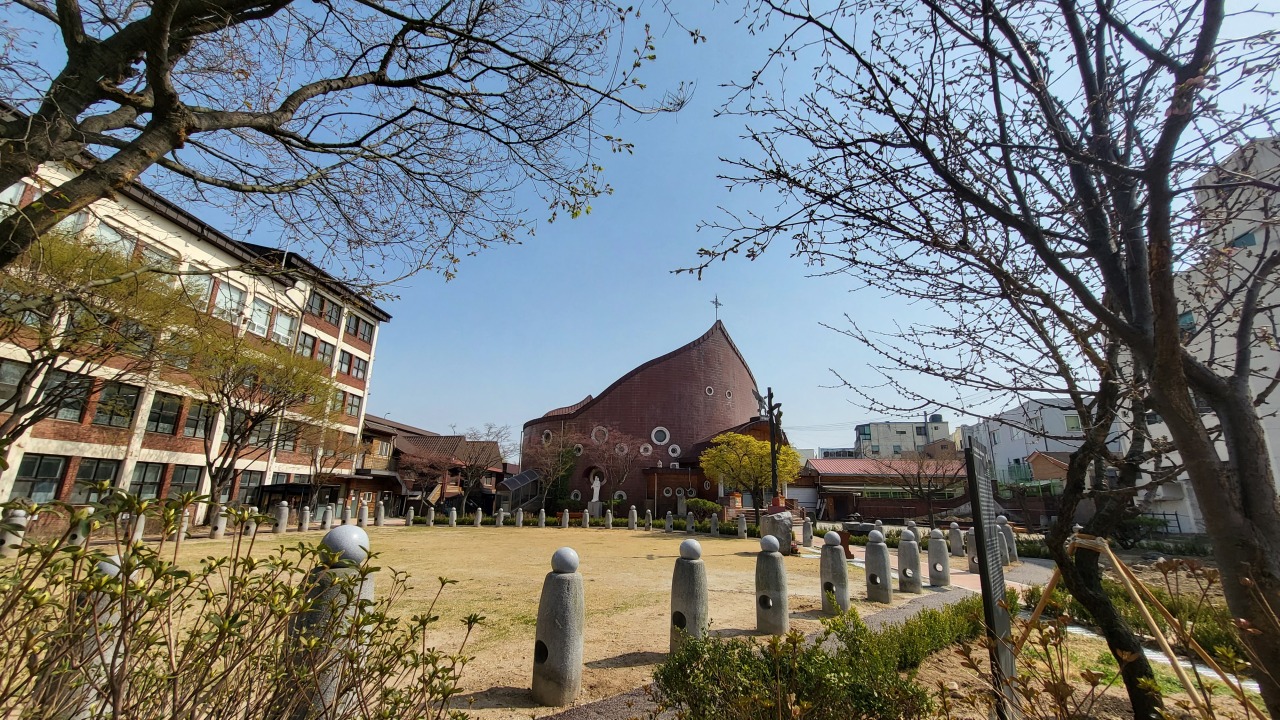 Buksudong Catholic Church was established in 1923 during the Japanese occupation of Korea, and is one of the designated Catholic pilgrimage sites.

The number of believers at the church, also the city’s first Gothic building, reached over 2,600 during its early years.

In 1934, Sohwa Elementary School was established within the church compound. The name Sohwa comes from St. Therese. Father Sim Eung-yeong (Desideratus Polly) was the fourth parish priest of the church, who also served as the school’s first principal.

The elementary school burnt down during the Korean War, but after two rounds of restorations, in 1954 and 2007, the building reopened as the Polly Gallery in 2007 to commemorate the school’s founder. The roof truss, stone walls and overall layout all remain intact inside the gallery, with a photo archive of Buksudong Catholic Church. 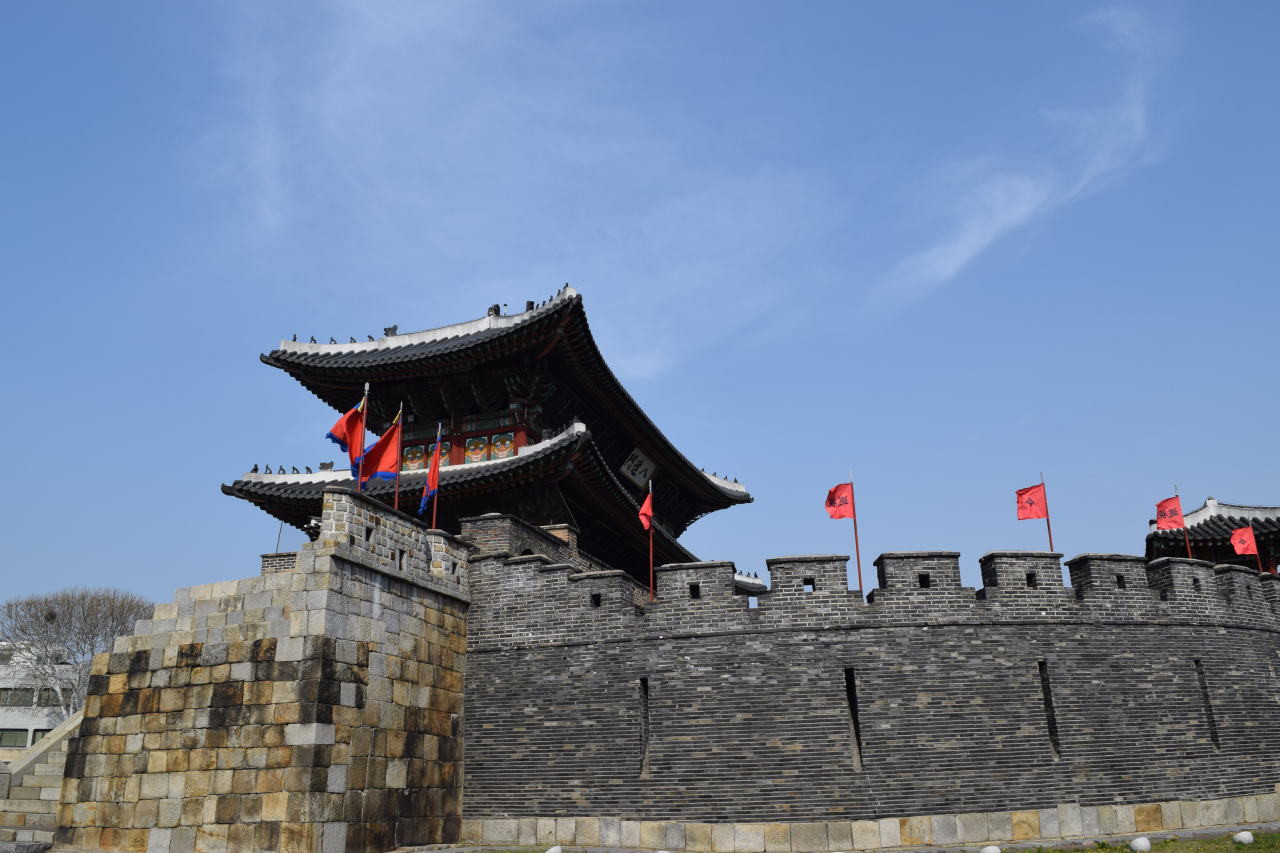 Traditional markets, shops and eateries are spread out in all directions from there, while people wait in long lines in front of a bus station at the roundabout.

In the past, goods coming from Chungcheong and Jeolla provinces passed the gate to continue on to Hanyang, the capital city.

The two-story wooden landmark houses a bell which was cast in 1080. The bell can be seen only on special occasions such as during national ceremonies and Buddhist rituals when it is in use.

Take a walk around the Paldalmun Traditional Market for an authentic Suwon experience. Aside from fresh fish and meat, different carts and stalls offer a dizzying array of street foods, including sundae and bindaettoek. 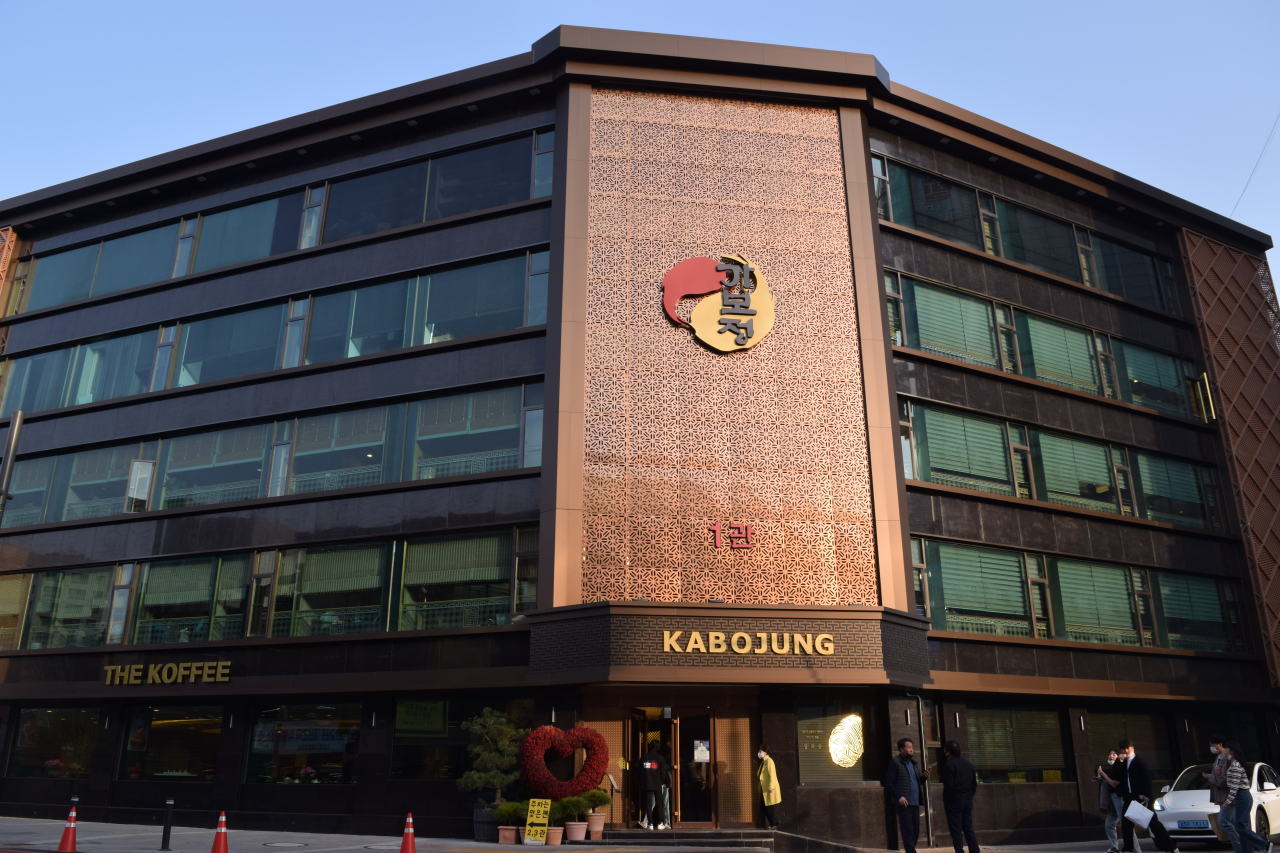 Gabojeong Galbi in Ingye-dong, Suwon, Gyeonggi Province (Kim Hae-yeon/ The Korea Herald)
A day trip to Suwon requires quite a bit of walking. When you are tired and hungry, the famous Suwon galbi is just the thing to restore your energy levels.

The name Suwon galbi traces its origin to the days when Suwon had the largest cattle market in the country, up until the early 1940s.

Although there are countless galbi places throughout the city, Gabojeong Galbi, located in Ingye-dong is a favorite among the locals as well as visitors.

The restaurant’s three large buildings are a testament to its huge success.

Galbi is grilled on a charcoal grill placed at the center of the table. A plethora of side dishes are placed around the grill.

You can order regular or marinated galbi. Prices for hanwoo beef are higher than that of imported US beef. A 270-gram serving of marinated hanwoo beef ribs is priced at 67,000 won.