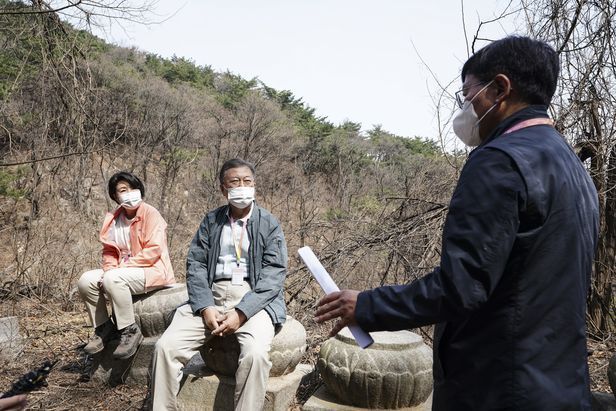 President Moon Jae-in (center) and first lady Kim Jung-sook (left) listen to Kim Hyun-mo, head of the Cultural Heritage Administration, while sitting on the cornerstones of the presumed site of the temple Beopheungsa, on the southern trail of Bukaksan on Tuesday. (Cheong Wa Dae)
진행자: 김혜연, Kevin Selzer

[1] Cheong Wa Dae on Thursday released a photo of President Moon Jae-in putting his palms together and bowing in front of a Buddha statue located behind the presidential office, after the Buddhist community criticized the president and first lady for sitting on cornerstones of the presumed site of the temple Beopheungsa, during a hike Tuesday. The hike was organized to commemorate the opening of the southern side of Bukaksan to the public.

[2] “President Moon appeared to be at a loss after receiving a report on the media reports that said that it was inappropriate to have sat on the cornerstones of what is thought to be the site of Beopheungsa,” Park Soo-hyun, senior presidential secretary for public communication, posted on Facebook.

[3] Park wrote that in 2017 Moon ordered a reevaluation of the Buddha statue on Cheong Wa Dae grounds. Upon further research and review, the statue, then designated a heritage item by the city of Seoul, was elevated to a state treasure.

[4] “President Moon’s reverence for the Buddha and respect for Buddhism are unchanging,” Park added.

[1] John Cho’s recently released “Troublemaker,” co-written with Sarah Suk, is a coming-of-age story that takes place on the single, infamous night of “Sa-I-Gu,” or April 29, 1992.

[2] As the world is changing around him on the first night of the Los Angeles riots that followed the acquittal of four police officers who had brutally beat Rodney King, a Black man, in an incident caught on video, Korean American boy Jordan’s own world -- his central identity -- is experiencing its own unrest.

[3] “Troublemaker” is the debut novel of actor John Cho, who has been a familiar face on screens for over two decades. Starting from the late ‘90s, Cho was stealing scenes in comedies like the “American Pie” series, before landing the first titular role in stoner comedy “Harold & Kumar Go to White Castle.” With numerous TV roles along the way, his career took a prominent, and more dramatic, turn with lead roles in 2017’s “Columbus” and 2018 hit thriller “Searching.”